How would a species turn its skin to stone?

I'm making a species that turns the outer layers of its skin to stone, for defense purposes. It'll also have eyes that glow yellow, due to ingesting sodium vapor or helium. Is there some way to combine two processes, or do I just need to make the planet's crust or atmosphere abundant in one of the two?

Edit: would it be possible that life in mineral-rich water in caverns could lead to a build up that the creature takes advantage of? Because I've narrowed my ideas down to either that, or it forms chitin in rocky formations both as defense and as camouflage.

If you want to have stone skin, you need to put the proper minerals in the skin layers.

Of these minerals, sodium can be one, but helium not. This because helium is a noble gas, and has practically no reactivity with other atomic species.

Also, sodium vapors and helium do not glow on their own, but need to be excited to emit light. This usually happens by applying a strong electric field, which is tricky to achieve in living organism. You can pursue something similar to electric eel, but that would give pulsed glow, not continuous.

On top of this, sodium alone is pretty aggressive, and hardly compatible with living organisms.

The problem with transformation is, in your case, that it must reverse. This calls for multiple instances of chemicals substances and a wasteful use of energy. It is just too complex and wasteful for being an evolutionary trait, which selects simpler and efficient.

So the answer to your question is: have your species' skin covered with a secondary outer layer of interwoven fibers, transpirant but capable to fend off the fangs and claws of predators.

As for the luminous eyes, another no good: If they become a source of light themselves, they will interfere with the person's vision. I'd suggest you go for augmented light receptors, so to give them a perfect night vision. Their weak point would be, when used in this way, a sudden lightning that would temporarily blind them.

There is already a group of animals that do this, echinoderms specifically the starfish.

Their skin is composed of thousands of bony ossicles mixed with a special connective tissue called "catch connective tissue" which can turn from soft and flexible to rigid in a few seconds. This is the reason when you pick up a star fish at the beach it is all stiff and hard, they use this for both defense and to make themselves stronger to pry open bivalves. How this tissue accomplishes this drastic change is not well understood but it is a real change in the mechanical properties of the tissue that goes down to the nanoscale. Cooler yet it is under nervous control, meaning your humanoid could have it under voluntary control.

"Is it possible for the skin to harden into rock?"

I could only imagine this closer to an insect or alligator snapping turtle with light reflective eyes.

The skin could have been thick not made of stone, it may look like stone, or it could form a rock like chitin. So it's possible I think. Human skin could also underwent Keratinisation for example if that what you meant by hardening.

"Can its eyes glow?"

Eyes can glow, but they will be blind to the light spectrum they are emitting. Since vision works by absorbing light spectrum. Eyes that are reflective to light are pretty common among predators however, they called it Tapetum Lucidum.

Still, if it must to sacrifice their sense for that spectrum, then they may glow by means of either photo luminescence (absorbing light), or bio luminescence, they both do not require Helium. Sodium compound may emit light, but may only do so within ultra violet spectrum.

Your species could turn the outer layer of its skin to stone by sticking sand and stones to its skin. The caddisfly larva does this. 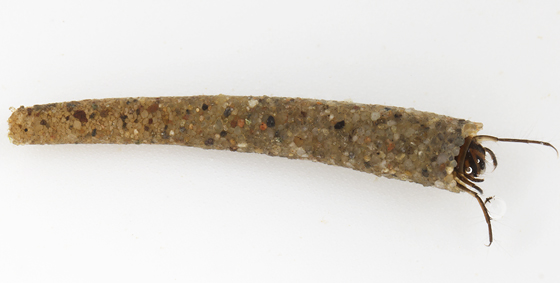 This could be reversible too.

If you want this process to be fast, your creature could store small stones and sand under the skin in pockets then push them out onto the skin surface when needed - sort of like a cats claw is pushed out when needed.

Not the answer you're looking for? Browse other questions tagged science-based aliens or ask your own question.

9
Ability to harden skin at will
5
How could something like a Gargoyle evolve?

13
How to evolve blue skin?
3
How can I turn water into wine?
6
How could a species that sheds its skin make lasting artificial changes to its outer body?
5
How can I tell if stone age aliens are sapient?
17
How can I explain alien skin being different colors?
8
How would an aquatic, air-breathing species organise its spaceship interior?
4
How much metal could a humanoid safely have in its skin and bones and be functional?
3
What Kind of Pigment Would Allow Basic Photosynthesis and Give the Skin a Blue Color
3
Could a humanoid alien species evolve to have a natural melanin deficiency but still have colourful skin/skin markings?