Which parameters could be used to determine that two sentient beings are from differente species? [closed]

Ask Question
Asked 2 years ago
Active 2 years ago
Viewed 151 times
2
$\begingroup$
Closed. This question is opinion-based. It is not currently accepting answers.

Let's say that there is an alien species of sentient beings, called Alpha. They are suped-advanced in bio-engineering (like DNA manipulation, medicine, etc...).

At one point of their history, their society breaks into two major groups:

If you mean the classical term of biology "species". The term species is referring to a group of animals similar enough to one another to interbreed. This is not as clear as you might think.

When a population splits they can have different selective pressures and develop slightly different traits. But neighboring populations tend to still be able to interbreed while more distant populations might not be able to.

The following image shows this. The lines between the different populations show neighboring populations. Due to the ongoing divergence over time as the populations travel around the barrier they might become so different that the final specimens of both groups can no longer interbreed, although you can form a path of populations to them only with closely related ones.

This concept is called ring species. 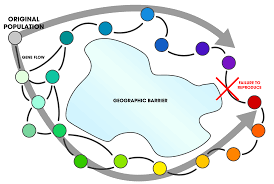 Back to your populations

Since you mention the beta changing their own genes they probably become different species themselves as many differently modified specimen might still be able to reproduce with some, but won't be able to interbreed with all of the other betas. Some might modified so much that they can only interbreed with other who were modified exactly like them and thus being a singular species.

And thus not only would the Beta be different from the Delta, but they would also be a multi-species community.

Not the answer you're looking for? Browse other questions tagged biology xenobiology or ask your own question.