Astronomical event that creates meteoroids/asteroids on a collision course with Earth?

Considering the below constraints what variant of astronomical event could create meteoroids and asteroids on a collision course with Earth?

This sounds a lot like the Late Heavy Bombardment.

The Late Heavy Bombardment happened about 4 billion years ago, and lasted for a couple hundred million years. The prevailing theory is that it occurred when the outer giant planets changed their orbits, scattering many small bodies from the asteroid and Kuiper belts. This dramatically changed the structure of the outer Solar System. Many of these small bodies - asteroids, for example - hit the terrestrial planets, as well as the Moon.

We do appear to have a second case of this happening, in the planetary system of Eta Corvi. Some of the dust in the system is theorized to have come from collisions between asteroids and similarly-sized bodies, as well as from a planetary-mass object. The trigger for the bombardment is unknown, although it could be due to planetary migration, as in our own Solar System.

That said, the bombardment rates during the Late Heavy Bombardment are much lower than what you're looking for - likely because there just isn't enough matter in the Solar System to keep up impacts at the rate you want for long geological timescales. On shorter timescales, though, a drastically sped-up bombardment could work.

For a nice visualization, check out this simulation on YouTube.

At $t=505$ million years, the system is pretty stable. The gas giants are, in order, Jupiter, Saturn, Neptune, and Uranus, and the green bodies represent objects in the Kuiper Belt. The inner terrestrial planets are not shown: 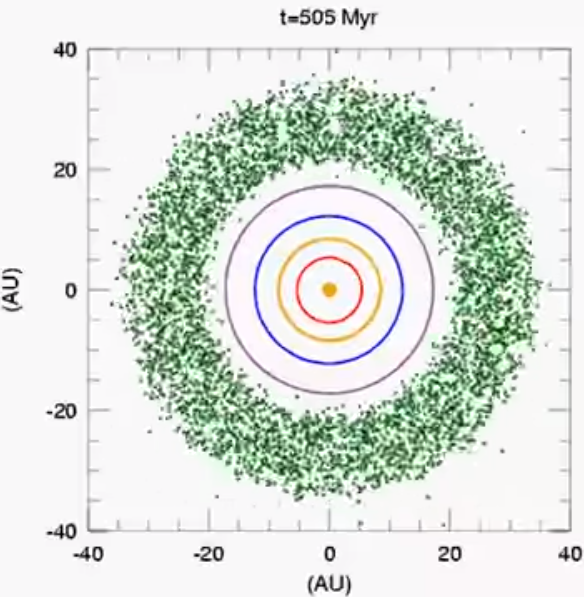 At $t=882$ million years, the system has recently experienced an instability. The orbits of Neptune and Uranus are changing, and the smaller objects are being scattered across the Solar System: 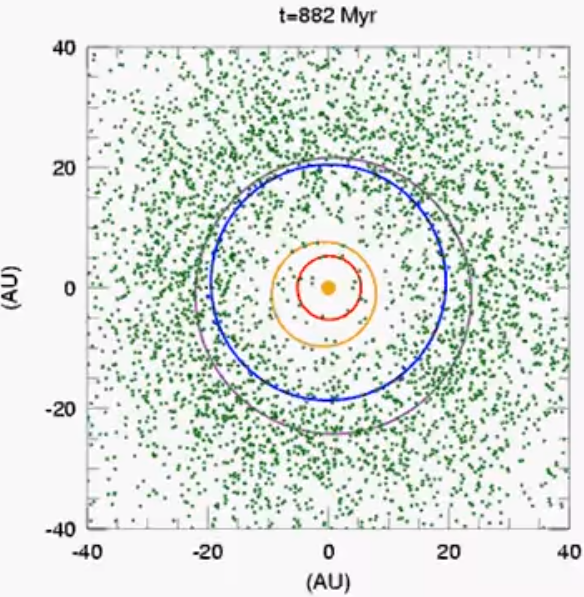 At $t=983$ million years, the giant planets have started to settle down a bit, and better resemble the outer Solar System as seen today. The Kuiper Belt is now substantially less dense than it originally was - more like its current structure: 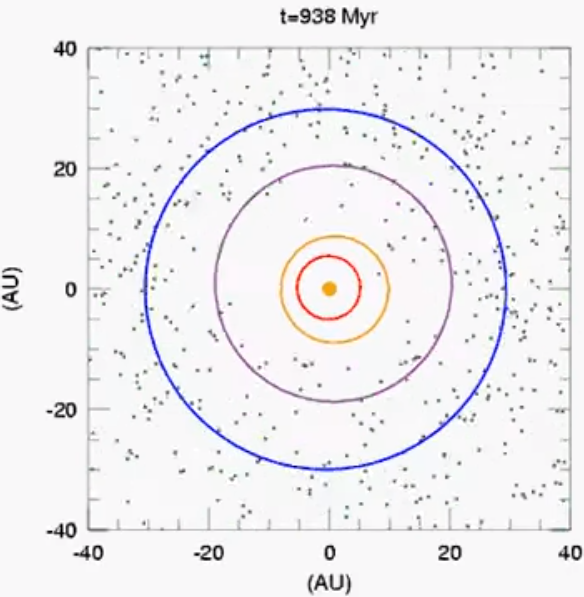 For a comparison, here's Figure 8 of Lisse et al. (2012), showing the modeled structure of the Eta Corvi system. The red bodies are the analog of the Kuiper Belt; the inner blue bodies constitute a smaller disk that may be made of debris from a planet that sustained extreme collisions with asteroids: 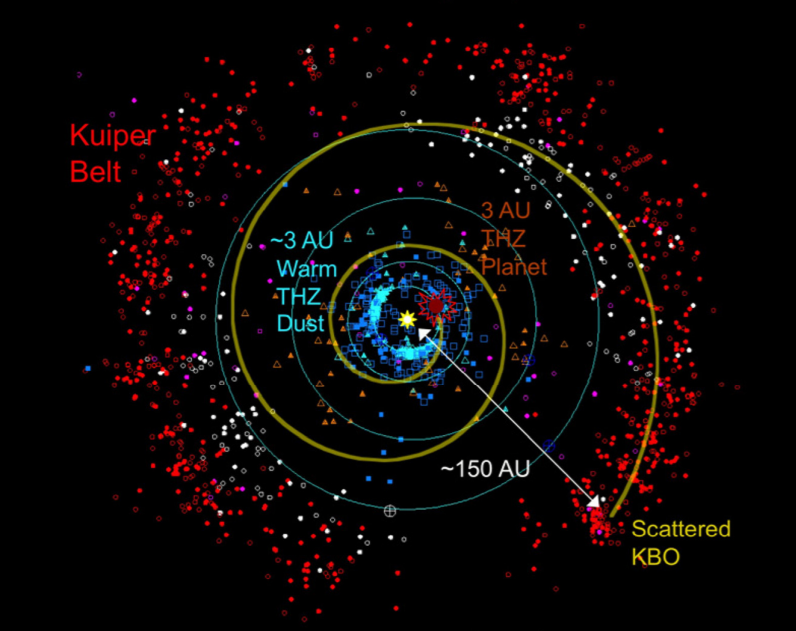 That... sounds like a LOT of space rocks. Widely spread out, if you want it to be sustainable and continuous, and not just a "once every X years" event...

Now, how do we get that many rocks close to earth? I'm thinking that with some handwaving (or a lot of time spent calculating orbital mechanics^^) we could have a rogue planet coming into our system, destabilizing the orbits of mars and venus, and after a couple close flybys two of those three planets (or all three, or first two then a remaining core of one of them with the third...) might collide spectacularly.

Now, earth's orbit might be changed some too, but maybe we were just lucky enough to be on the other side of the sun when it happened? Or maybe you can use a changed orbit in your story, who knows. Either way, there's now three planets' worth of debris in an area that at least partially overlaps with earth's orbit, and if you get the speed and direction of the rogue planet juuuust right, that debris might've spread out into a new asteroid belt that earth is now constantly flying through.

Still not sustainable forever, but for a very long time - though some rocks might be bigger than you wanted ;)

They are using a mass driver to launch stuff they've mined on into space. Usually you'd do that in a direction where you can use said stuff - but maybe they're just huge jerks, or afraid of us, or for some other reason want to make it as hard as possible for us to fly to space - and a constant bombardement with space rocks would certainly do the trick!

It could also be the humans - the colonists on mars are afraid of being conquered by earth, so they've set up a mass driver on some other planet so the UN can't send troops and subjugate them...

Or if you want a REALLY strange thing, it's actually a mining operation, on a planet orbiting alpha centauri (or some other nearby star). The aliens think in really long time periods, so they don't mind waiting while all the metal their robotic probes mined on that planet flies through space towards their star system... Too bad someone didn't think to check for other stars crossing the line of fire, and now the sun is right in the middle of the stream of valuable ressource pellets!

Not the answer you're looking for? Browse other questions tagged science-fiction asteroids .

3
How to explain Earth-like gravity in small asteroids?
3
Could a collision of a rogue asteroid with Pluto pull in objects from Kuiper's belt into the inner orbit without destabilizing any other Planets?
29
5km artificial planet, with same gravity as on Earth
8
How can an individual with Superman like powers best harvest asteroids?
1
Asteroids with an atmosphere
20
Delivery of minerals to Earth from the asteroids by artificial meteorite or solid metal glider
2
Could asteroids getting shredded in low Earth orbit by an alien probe result in Kessler syndrome capable of preventing ICBMs from functioning?
4
Can nuclear intercontinental missiles be launched into space to destroy asteroids menacing Earth?
5
Could the extraction of rare earth elements (REE) be more efficient on asteroids as opposed to on earth?