How to detect trespassing in space?

So, the United Terran Federation and the Qulian Star empire have been in really bad terms lately. Wars, skirmishes, it pretty bad. So, the UTF and QSE have made an agreement. No ships piloted by citizens from either nation are allowed to trespass on the others space. If they do, that ship’s crew can be arrested, and the ship itself will be impounded. But there is a fundamental problem with this agreement: both sides have a territory spanning more than 1,000 Light years, and it would be impossible to patrol all of that area with military ships.

So, how could you detect trespassers in our space?

Space is huge, but most of it's boring. Rather than tracking where people are or have been, track where they're going.

Each system would be responsible for its own detection (and probably interdiction). String up sensors near your planets and other important bodies. They can be anything; visible light is fine. If they detect a ship, you hail it and demand and (automatic or manual) response code of some kind. If you don't get it, you impound the vessel.

Ships would have virtually unfettered access to interstellar space, meaning you'd need another means to detect things like muster or rendezvous points in deep space. However, in order to do anything meaningful, at least one ship has to come near one of your planets (moons, stations, asteroids, whatever) eventually. Aside from an invasion fleet, you should be able to intercept any clandestine activity as it approaches its destination.

This setup does require each of your systems, even ones not near the border, to be warded, but you're going to want to do that for law enforcement and traffic control reasons anyway. (It will protect you against things like smugglers, as well as the potential hazard of ships moving through your systems any old how, without necessarily knowing what other ships or hazards are around.)

First, If something is moving at or faster than light speed you will not be able to detect it until its already on top of you. Additionally if a ship is 20 light years away you wont be able to detect it being there until atleast 20 years later. Then again, FTL travel is already such a punch in the face of regular physics that if we translated the figurative handwaving into real limb motion you could fly. So I guess you could handwave some kind of FTL detection system too.

Attach an FTL drive to a powerful missile. Im thinking it would have an antimatter warhead, a fusion torch engine, and a one-shot FTL drive. If an enemy ship is detected in the bubble of space your hot-head empires have arbitrarily determined is a no-go zone a missile carrying enough boom-boom to vaprize a continent will warp in right inside thier defenses and turn them into a very bright and poigniant reminder why you stay on your side of the line.

Again, our hands are waving so hard we're breaking the sound barrier here, so thats a soft science answer. The hard science answer is that just about anything outside of a system's oort cloud is far enough away and a big enough area that you wouldnt be able to reasonably patrol it, much less reach out and touch them. Only populated areas with active sensors and defenses would ever be truly off limits. Think of the early middle ages when a "kingdom" might only extend as far from the monarch's castle as his knights can ride in a few days, and borders or even large swathes of the countryside are often vague and unmapped/uncontrolled. Basically that only your castle is a colony and your area of control is as far as you can burn the engines on something with a ridicuously powerful laser and sensor array.

When it comes to detecting passage, your problem is 2D, not 3D. You have an irregular sphere (at worst) and you want to determine if any ship passes through the shell or surface of that sphere.

You need the same thing.

Realistic Near-Future Tech, no FTL: IRSUS or Interstellar Radar Surveillance System. Radar moves at the speed of light and won't be (well, generally won't be) lowered in efficiency due to atmosphere (the vacuum of space is convenient that way). You need your satellite network synchronized so that you can take advantage of both reflections (signal reflects back to sending satellite) and shadows (anticipated signal doesn't arrive). This would help speed up analysis of location, direction, and speed. Since no ship is traveling at light speed, your empire will always be warned first.

Far Future Tech with FTL: TASUS or Tachyon Surveillance System. Tachyons are probably overused (Star Trek likes to use the fictitous Chronitons), but it serves the purpose here. Something that can have some Clarkean Magic1 applied to it such that the signal is still faster than the ships. Otherwise, the network operates the same way as the IRSUS other than detecting the time-space disruption of the engines rather than reflecting a signal.

The two important points here are:

1 Any sufficiently advanced technology is indistinguishable from magic. 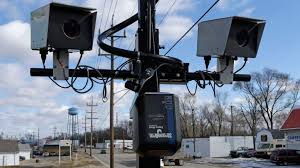 These cameras detect speeders. By the time you get your speeding ticket, you have been done speeding for many days. But you still get the ticket.

The key in your scenario is that you are cosignatories to a treaty. You do not need to catch the offenders in real time to deter the offense. You are within your rights to ask your cosignatory to enforce its side of the treaty.

Your drone cameras float in space and take readings of whatever goes by, then send them to base via ansible or whatever you use.

You will not catch the trespassers in the act. You will notify your treaty signatory that you have detected a ship in violation of the treaty, and they must honor their agreement - for example, turn over said ship to you, minus cargo and crew.

Nevermind the origin of your attackers, as long as you know who they are: Just fortify the worlds of your realm, protect them with arrays of sensors within their solar systems and automated battle stations. the closer to a planet, the stronger the defense. It is costly, but never as much like keeping patrol of a 1,000 YL sphere.

it's a game that can be played in two: Your enemy will know their space can be violated in the same fashion and won't risk a retaliation unless there's an absolute certainty of victory without catastrophical losses.

Limit Entry at a Chokepoint

Given that these kingdoms are separate and distinct, it can be assumed they're not directly adjacent to one another. So instead of worrying about controlling the vast borders, just patrol the connection points. Think the Hyperdrive Docking ring from Star Wars, but as a central government service (like public transport) that requires two sides - a sender and a receiver.

This provides the benefit of a setting for any transport scenes you need. In addition, you can have a companies that provide transport as a service, and you'll have to decide a few things like "What happens when the other side doesn't accept your re-entry?" Ships could just be lost to the vortex, or they could turn into high-speed fragmentation (vis-a-vis The Last Jedi), or something completely different. Totally up to you.

Not the answer you're looking for? Browse other questions tagged space .

8
How to improve space bandwidth?
5
How do you detect a rock in interstellar space?
13
How far from the Sun could we detect an alien spacecraft similar to the Voyagers?
15
How could a civilization detect tachyons?
1
Efficient way and rough design to detect rogue planets in interstellar space
10
Could 1950s technology detect / communicate with satellites in the solar system?
9
How do you detect and defend against micro blackhole cannon?
3
How does one detect a warp bubble LYs away without years of delay?