How would you realistically set up bat racing on an island?

One of my main characters lives on an island where people bet on bat races. My story is set up so that bats are domesticated and race one another in dark caves. The bats would use echo location to find their way through the cave.

Question: How could bats be raced (motivation, deliniation, and of course, gambling)?

Skip a feeding or two before the race, give them something to eat, and watch them eagerly fly back to their roost to eat it. A little colored ribbon around their feet and judges keeping an eye on the roosts will let you know which bat won.

Bats which eat fruit or small animals will take their food back to either their nesting roost or a special feeding roost in order to enjoy their meal in comfort and safety. Thankfully, bats roost in close groups, so the racing bats simply need to be from the same roost in order for the race to have a single finish line that they will all fly to.

Corral them a day before, attach a little ribbon to make them distinct, lay out some fruit at the cave's starting line, and have them skip a meal in order to make them motivated to quickly fly home and eat. 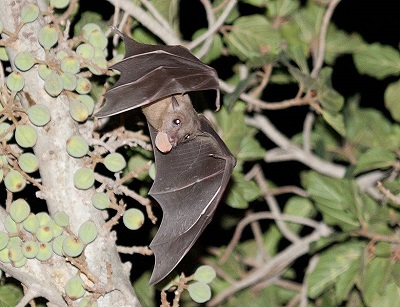 I would race them in a similar way to pigeon racing today, run by various bodies in different countries such as The Royal Pigeon Racing Association.

The bats would be habituated by their domestication to live in particular roost sites, which they would return to on release. A number of bats would be taken to a release site and the first to return to their home roost would be declared the winner.

A small amount of magic would be used to tag each pigeon and find out which one was the winner.

Mark the bats with painted symbols

The idea of trademarks and brands are almost as old as humanity. A little paint and a symbol registered with race officials and you know exactly whose bat won.

Betting on bats would be no different than betting on any other sport, but let's stick to horse and/or dog racing. Bets would be on first, second, and third (win, place, and show).

You tagged your question "magic." Cool. Motivation is easy with magic. Put something pungently tasty at the end of the race and then magically cause your bats to feel desperate hunger. They'll fly like a bat out of... well... you get my point.

None of which is your actual problem

How do you determine who won? Bats are small, fast, and (thanks to echolocation) notoriously difficult to catch. And if two bats are flying closely together, they're hard to see as two bats (much less more). Here are some ideas:

Training is out of the question. You can't train bats. But you can have them painted, then wait until they leave their nests to swarm into the night, then follow them with spyglasses and see who makes it back to the caves first. Only one winner, only one loser as the last to come back in, while nature does its job

Not the answer you're looking for? Browse other questions tagged magic games low-fantasy or ask your own question.

6
What should be the limitations of a gift-generating power?
3
Mix most underground water sources with a substance
6
Which real culture would best match this hunter wolf-people society?
10
How much of an advantage in medieval-style combat would it be to have four arms with pivoting shoulders?
6
Balancing Humanoid fantasy races: Elves
3
Explanation of Game-Balancing Mechanics for Creature “Types”