How flat is “Flat Space”?

The idea of "Flat Space", an area of space-time with minimal, preferably zero, gravitational curvature, is an important concept in many Sci-fi universes, often those with "jump-drive" based FTL travel. I'm working on one such universe at the moment. The gravitational "edge" of our solar system is thought to be the outer edge of Oort Cloud. If that is the case, and some of the size estimates of that region are correct, then the outer edge of the sun's gravitational influence is actually within Alpha Centauri's gravity well.

So my question is, is there really anywhere outside the influence of stellar gravity that would form a completely flat jump site or do we have to settle for areas that are "flat enough" near the edge of star systems or have artificially created jump zones?

Related but separate Gravitational flatness, the topography of Lagrange “points”, as the answer to this question points out there is nowhere natural within a solar system that works for this.

It's not at all clear that there's nowhere inside a solar system that has the right properties. For example, there's a spot just outside the Earth-sun L1 point (closer to Earth) where objects will instantaneously be going straight with respect to the sun's coordinates: They'll appear to be falling toward Earth as it moves around in its own orbit. That supra-L1 point will sweep by quickly, so the object is only in it for a short time, but it's there.

Unfortunately, if you really need "zero", you'll have to include the effect of Jupiter, Saturn, other bodies, even this Galaxy and even others. That becomes untenable as a calculation.

If you can measure flatness and only need it for an instant, you can go searching for it between large bodies. The curvature (component) will change sign as you move closer to one or the other, and because it's a continuous function, it has to go through zero.

Unfortunately, you're probably looking for something that's "flat" along all components: along the line between the bodies, and the two orthogonal directions. It seems from some examples that a "flat" point for all of those can still be found near L1, if the bodies generate enough curvature of their own to compensate i.e. Jupiter, but it looks like a big pain to prove that. If it's true, that just means that your computations and searches might just take more time; if it's false, such a point might not exist after all.

From A Physics Perspective

Our galaxy itself is producing a warping effect upon space time curvature, and literally every bit of matter within the universe is acting with infinitesimally small force upon us as we speak. Simply put, the gravitational effect one object has another is a factor of each of the objects mass in relation to their distance from each-other. This means that the amount of gravitational effect something has on you will never be zero, it will simply be such a tiny amount that its basically zero for practical purposes.

Finding a place were space time is "flat enough" Isn't possible either. Though "flat" is kind of a misnomer since space isn't a 2 dimensional plane. Those pretty wire-frame computer generated images showing cone shaped gravity wells are just a convenient way to demonstrate how space is warped, its really a sphere of influence. Even the space in between galaxies is pretty cluttered. Here's a gravitational picture of a part of our universe. The little dots are galaxies and galaxy clusters, and all the filaments and fields are dark matter. 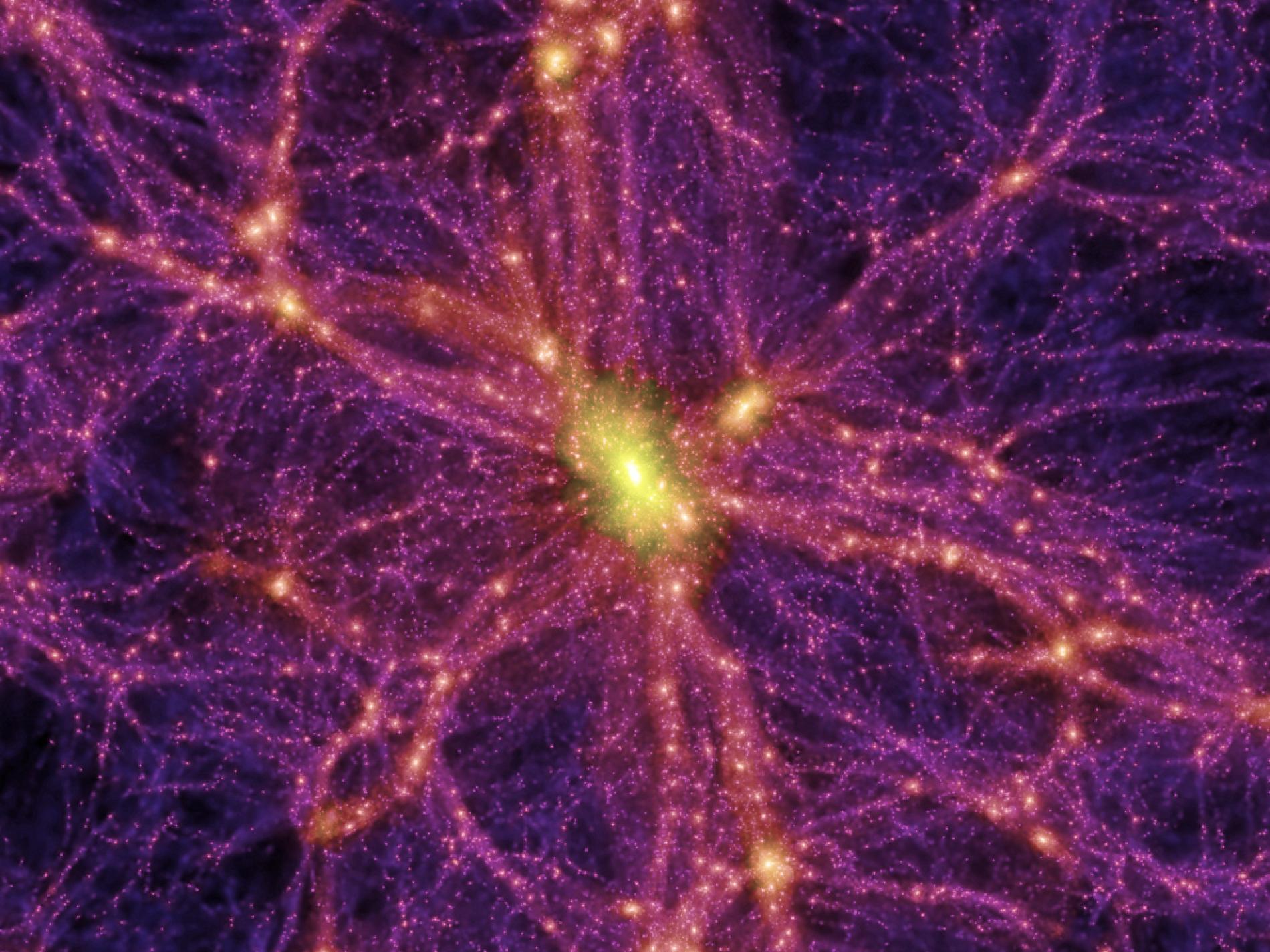 The only reason we can detect the dark matter is because its gravitational influence is so great that it bends light slightly as it passes, so we cant actually see the dark matter, we can just tell where it is due to the light bending around it. In short, even in the most remote part of our universe you are still within a gravity well.

Leaving our solar system to escape a gravity well is like crawling out of the well in a serial killer's dungeon only to find yourself inside his house. Leaving the galaxy is like leaving the basement only to find yourself in the haunted forest that surrounds his house. You just cant win. So I would suggest some sort of hand waving where your ships computer finds a spot outside the solar system where it detects and calculates all the various gravitational effects upon it then compensates for any that are great enough to effect anything in the jump.

The idea of "Flat Space", an area of space-time with minimal, preferably zero, gravitational curvature, is an important concept in many Sci-fi universes, often those with "jump-drive" based FTL travel.

So other people do this, so what ? It's you're story and you can do something else. Don't get bogged down by what other people have done.

Remember also that FTL of any kind is handwavium from a physics point of view. We have no reason to think it's possible at all and several to think it's not.

So whether some story insists on using "flat space" as a source or destination is irrelevant, IMO.

TCAT117 has already explained that there really isn't any absolutely flat space possible. However keep in mind that all the concepts involving curvature of space also say you can't have FTL, so you're on one hand trying to obey rules that don't exist (as far as we know) and ignore rules that do.

So from a physics standpoint if you're going to allow FTL, you only have to pay attention to not creating inconsistent rules for your story. But those rules don't have to match any other story.

If you want to use the notion it's certainly not silly sounding to suggest that getting too close to a gravity well will e.g. make accurate navigation harder. Put in a simplistic way, it's harder to navigate on a bumpy surface than a flat one.

Also remember that "flat" doesn't mean "not on a hill". If the gravitational field is more or less constant, you're in a flat region. And that's most of space except very close things.

To put this in perspective, you live on the surface of Earth (hopefully we can both agree on this :-)) and live your life in what looks like a pretty undistorted universe at $9.8\, ms^{-2}$ gravitational acceleration.

The Earth orbits the Sun so you'd assume it was pretty powerful. The actual gravitational acceleration at Earth's distance from the Sun is a mere $0.006\, ms^{-2}$. Yes, that small. Gravity is considered the weakest force so don't get distracted by it.

If that is the case, and some of the size estimates of that region are correct, then the outer edge of the sun's gravitational influence is actually within Alpha Centauri's gravity well.

Alpha Centauri is a complex system of what is three stars totaling about 2.1 solar masses. The "gravitational half way" between the Sun and this system is roughly 1.25 light years from the Sun as the combined masses of the Alpha Centauri system have greater influence than the Sun at this range.

There's no such edge. The matter in the solar system has a gravitational influence for about 4 billion light years, that limit being chosen because before roughly that time scale, the solar system did not exist. But even before that the material that became our solar system existed somewhere around the region it was part of.

The solar system has completed about 50 orbits of the Milky Way galaxy since it was formed, so we've been confined to a relatively small region (on cosmological scales) around the Milky Way's "center".

Not the answer you're looking for? Browse other questions tagged reality-check space-travel faster-than-light or ask your own question.

2
Creating wormholes that aren't magic
10
How would FTL travel appear through window of ship?
31
How to effectively slow down a ship about to shoot through the Solar System at 0.6c?
2
Travel (how far?) into the future using a black hole and light-speed space craft?
4
Is my solar system even remotely plausible?
22
Aliens englobed the Solar System: will we notice?
5
When universes collide
5
How to design a proper void whale?