Martial art for a pacifist in a wold of kung-fu? [closed]

A hero with no name is a strong pacifist. The why is not important right now.

The problem: he lives in a world of kung-fu where just being quiet and polite to live happily can't work for long. This is not a society where the violence is a distant thing and only in hands of army/police.

Plus, he has a goal, and some other people don't wanna let him achieve it... ACTIVELY!

Confrontation CAN BE DELAYED with negotiation, talking, and other soft-skills, but sooner or later, violence will be required.

Because of his goal, he can't just take the damage or accept death for his ideals.

Now, I need a way for him to "fight" without turning into a martial pacifist (somebody that only fights as last resort but still actively uses violence, for example, Batman who fights but just avoids killing).

I'm looking not only for a combat system but also the strategy, tactics, and philosophy that allow him to succeed (ie: a martial art).

Also, because him is totally aware of the bad situation and conflicting goals of this setup, the hero knows that he must become one of the best "fighters" in the world to have a chance. When things start to unroll, he must be ready for the challenge.

Its the only sport that is officially completely defensive. That I know of. There are no contests between aikidoka as they would just stay and wait for the attack. That might look like it violates your "complete pacifist" clause but it is fully possible to provoke someone into an attack through your approach (which can unbalance them in advance).

The premise is that your enemy hurts himself by not accepting your moves, and as long as he accepts your moves he'll either stop the attack or he'll end up stuck in a hold.

Is it a "better" martial arts than others? That varies on skill and preference.

I'm looking not only for a combat system but also the strategy, tactics, and philosophy...

As @Demigan noted, Aikido is defensive to the point that contests would never happen because both practitioners would wait for the other to begin. There are intimately related systems Aikijutsu (more aggressive japanese form) and Hapkido (written with the same characters as Aikido, but with strong Korean influence) that do entertain contests.

Wado (peaceful way), on the other hand, has a pacifist philosophy, but also has the assumption that contests are a necessary step in preparing oneself mentally for a confrontation. Ohtsuka Sensei's contribution to the martial arts community as a whole was adapting the point system from Judo to striking arts, making tournament a viable form of training. Old style wado was a blend of Shorin ryu karate, jujitsu, and innovations of Ohtskua's own making.

Terry Pratchett lampooned Wado very recognizably in one of his discworld novels as 'The Way of Peace and Harmony and How to Blast Someones Liver Out Their Ears".

Here is a translation of common words and suffixes that will give you a handle on what a particular art is about:

Anyone can teach Wado Ryu, but you must be a member of a particular organization to teach Wado Kai. The syllabus of both would be the derived from Ohtsuka Sensei's teachings.

In a fight (as opposed to sparring ) the two most important factors for victory are size and overall athleticism. Knowledge/skill has am impact equivalent to 10 lbs (4.5 kg) of mass for every dan degree of rank up to 4th degree. In the edo period, the dan ranking system did not exist, so this is for information only. In order for your hero to be continuously victorious, it is fully reasonable for him to be larger than average.

The problem you will have is that, in the edo period, none of these 20th century martial arts existed except possibly jujitsu, whose purpose was to capture armored samaurai in battle. As a precursor to aikido, it is within reason that a jujitsu practitioner could discover the same principles as Ueshiba did 4 centuries later, and develop a system very similar to modern aikido.

Polynesians had a martial arts and weapons like this which was used by chiefs to settle disputes preferably without killing but with the capacity to maim or kill if it went that far. It was a strong deterrent and when a chief waded into a confrontation with one of these weapons it meant that people need to calm down immediately. It was a weapon of peace, not war.

Basically it is a big heavy hooked weapon which is designed to block and capture opponents weapons rather than kill them, but it also has projections specifically made for shattering bone just below the hook, so if it captures your weapon and you do not let go immediately you will lose the use of your hand forever.

These were not the easiest weapons to wield, but practitioners were feared.

If you model your hero's weapon and technique with similar aims in mind it could work well for your story.

Warning: I am not a martial artist but I have watched a lot of animes

To fight without fighting, your martial art must actively de-escalate the situation. Your hero knows not to apply any more force than is necessary to get an opponent to calm down to quell fighting. To the best of my knowledge, aikido was developed to disarm sword swinging opponents (some good videos can here). I would recommend a modification of aikido that allows for your hero to add on handcuffs!

Yes, handcuffs! What would be more demoralizing than having your hero walk up to the big boss, try diplomacy and when the big boss starts swinging, your hero disarms him and handcuffs the opponent. After handcuffing, your hero could even proceed to try to have a conversation with his opponent like nothing ever happened.

The philosophy should be something simple like violence only begets more violence. Your hero has decided that the only way to stop the violence is to break the very cycle of violence itself. As soon as violence starts to go down, your hero should try to disarm opponents and use the environment like a Jackie Chan movie to aid the hero

Funnily enough, Edo-period Japan actually had a weapon that suits your purposes, the sasumata (the one on the right in the image below). The broad forky part is used to catch or trap people, and the hooked parts (they're normally sharpened, but you can leave that off) can trip or throw people around. It normally has a nice long spear-like shaft that you can use for blocking, and to give your fighter an edge over people with knives or short swords.

These were normally used in a police context (to catch troublemakers with less lasting harm), so they would by no means be impossible to get or make, but they might be a little unusual depending on what your character ends up doing. 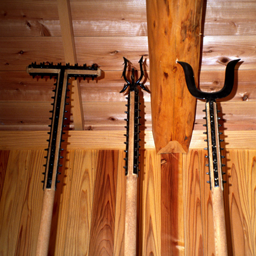 I think combat styles that focus on redirecting the enemies attack as well as grappling moves would fit such a character, for example Aikido.

Ueshiba's goal was to create an art that practitioners could use to defend themselves while also protecting their attacker from injury.

But just because he's a pacifist, doesn't mean that he can't throw a punch. Knocking enemies out without injuring is fine - after all, what's the harm of a minor concussion?

There's this thing called cloth-fu where a piece of cloth is twisted and held with both hands to block weapons (even swords), wrapped around an extended fist to restrict movement, used like a whip to tie around weapons and disarm an enemy, thrown over an enemies head to temporarily blind them (for the next punch to the face) etc. After or even during the fight it can also be used to tie up defeated enemies. I believe Jacky Chan uses it a lot in his movies, but I couldn't find a quick example on YouTube.

He would to use stealth and disguises a lot, after all there won't be much conflict if the enemy can't spot him.

In general Jacky Chan would be a great example, he doesn't want trouble most of the time, but trouble finds him and while he does punch and kick his enemies, he tends to helps his enemies when they hang off of a ledge for example.

Respect for all life is a very important part of Buddihst philosophy. If your hero is very pious Buddhist, it would make sense for him to only act defensively and avoid combat as far as he could, rather preaching or citing his monastic wisdoms to people to sway them from combat. Also as a monk, some might have religious issues to openly attack him right away.

Most of the folks in here have been recommending traditional martial arts and defensive martial arts. This is well and good, but you will find that the best way to counter an opponent is to be more familiar with their style than they are.

Experience is and will always be the best teacher. Unless your pacifist can't tell the difference between training and application, avoiding practical martial arts is unwise.

As for the main base to pacifists training? I would recommend a combination of boxing for the footwork and evasion, Judo for grappling defense (judo in the era mentioned had both extended ground fighting and throws, unlike modern judo), and spear training for weapons work. @Cadence 's sasumata seems like a good choice.

If you wish your pacifist to have an interesting martial arts philosophy, I would recommend training Aikido or some form of Kung Fu. With all respect to practitioners of these arts, they simply do not stack up.

Martial arts with no active, high intensity contest both within gyms/dojos and between gyms/dojos do not have their skills tested, vetted, and best practices do not spread.

Not the answer you're looking for? Browse other questions tagged combat martial-arts or ask your own question.

15
How would martial arts develop in world with monsters?
5
What martial art style would most suit an unarmed 'support' character?
5
Would Martial Arts be useful for an intelligent, powerful, quadrupedal animal?
22
Best fighting style for a pacifist
6
How would humanoid creatures with powerful jaws, claws, and a tail efficiently use their anatomy in barehanded combat?
8
How would werewolves incorporate jaws into their martial art?
4
The most suitable martial art for birdpeople?