I'm trying to "build" a world in which the moon is always visible at night, and only at night, to the majority of areas on that world. I've been told that an L2 Legrange point could be a viable configuration for this to be true, and that essentially means that the moon orbits the world at the same rate that the world orbits its sun, and remains constantly on the opposite side of the world from the sun. I am unsure as to the moon's direction of orbit and direction and rate of spin.

It seems that this configuration would result in the moon always appearing full, so I was thinking of ways for it to appear as a crescent while actually being "full" and still fitting the other conditions. I'm wondering if a moon that is not a true sphere, but rather a spherical crescent might work, as I expect it would have close enough orbital mechanics to work out mostly the same. I imagine that if it spins in the right direction at the same rate that it orbits the world, it could always appear as a crescent.

I have many questions, but the most important is: Is this viable, and if so, for how long? Will the orbit likely decay or will the moon become a sphere again (in my mind, it was carved by some sort of collision), and how long would both take if so?

I'm guessing the answer will change depending on the size, distance, etc. of all objects involved (moon, world, and sun). Perhaps the moon can be small enough that its own gravity won't cause it to reform as a sphere at all, and if so, can it still be big enough to be seen as a disc in the sky on a world that is habitable by humans and other life? Can a world of an appropriate size be sufficient for its own plant and animal life to have evolved by the point humans find it? And would anything else have to be specific, like the world's axial tilt or its ratio of days to a year?

I'm new to this, and any input would be greatly appreciated!

...the moon is always visible at night, and only at night,

A stable orbit that does this is impossible (there are however some compromises that are possible outlined below). Someone, somewhere on the planet will see the moon during the day. The 2nd lagrangian point (L2) is indeed the orbit that would place a planet in constant conjunction (i.e. located between) with another planet: 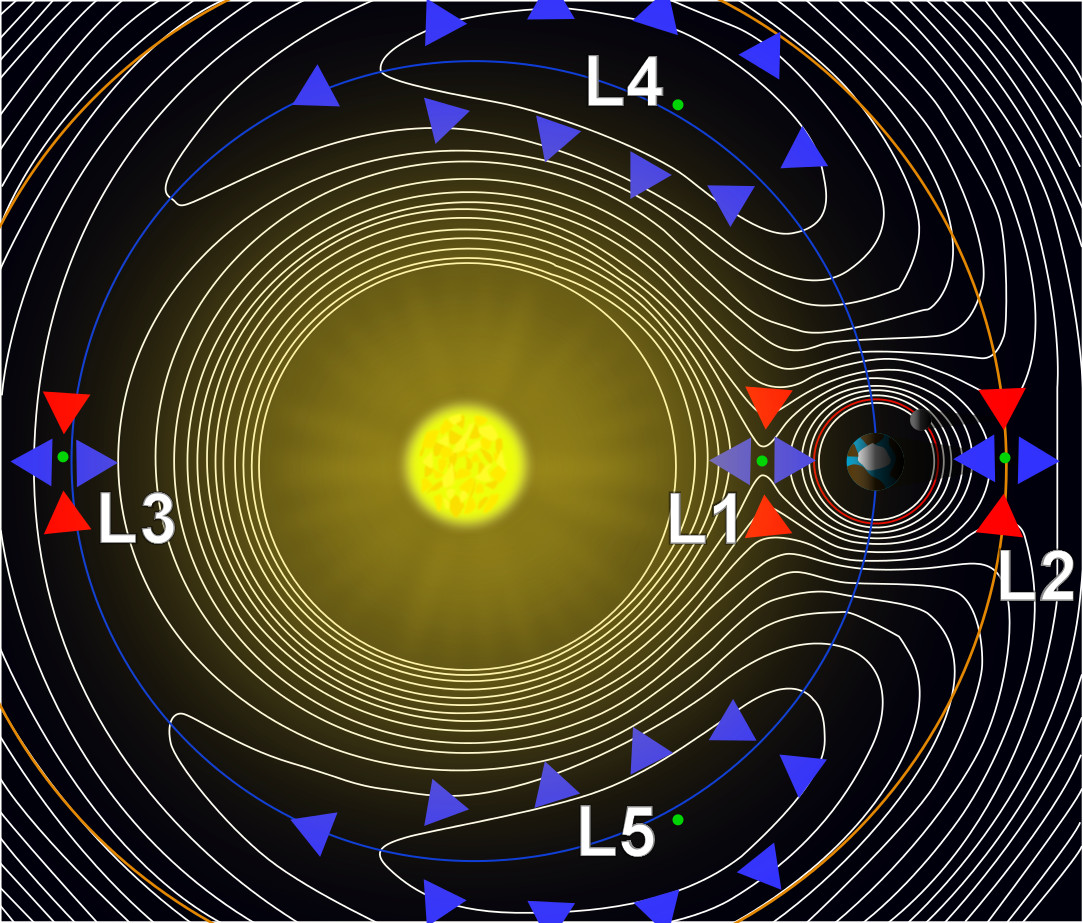 Image taken from wikipedia. The orbit that follows the path at L2 would indeed keep the interior planet between it and the star. However, the orbit is unstable: any perturbation away from L2 will continue to grow in time, causing eventual misalignment. If you are willing to ignore this fact, then it's mission accomplished. But if you need something with a bit more verisimilitude, I have a few potential candidates:

Earth's moon currently orbits at a distance of $3.8\times 10^8$m and $27.3$ days. We could get the orbital period down to a single Earth day if it orbited closer at $4.2\times 10^7$ m, or about $1/9$ the distance. The advantage of doing this would be the moon would always be in the same place in the sky, day or night. It would travel through its full phase (new moon to full moon) in a single day. And it would only be visible within some approximately $180^\circ$ arc of longitude. There would be a side to the planet that never saw the moon. A closer Moon would produce stronger tidal effects, unless you also reduced it's radius by 1/9th. Alternatively, you could lengthen the Earth day to match the lunar month and keep everything else constant. On Earth, the only geostationary satellites that are stable are the ones at longitudes 75-West and 105-West, and a Moon would eventually settle down there over geologic time. These longitudes are particular to Earth's gravitational field, and would be different for another planet.

A sun synchronous orbit maintains the same angle to the sun throughout the year. In other words, an orbiting body will appear in the sky in the same location at the same solar time each day. Everybody on the planet sees the orbiting body, but at a different time depending on their longitude and latitude. On Earth, sun synchronous satellites have short periods around 1-3 hours. For example, if a person on the East coast of the United States sees a sun synchronous satellite appear on the horizon at dawn, then every day it will appear at dawn (the same time relative to the Sun). Furthermore, since there is about a 3 hour time difference between the East coast and the West coast of the United States, a person on the West coast will also see the satellite at dawn when it comes around it's second orbit.

It is possible to extend that 3-hour orbital period a little bit if you fiddle with the mass and oblateness of the Earth, but it can't be extended to a single Earth day (I tried) without some nonsensical values.

Sun synchronous orbits need to be high inclination (near polar) orbits. However just like the geosynchronous orbit, half the locations on Earth will only see the moon during the day, and the other half only see the moon during the night. There is however a pleasant compromise: an orbit that is aligned perpendicular to the sun will follow the day-night terminator and will be visible to everyone on the planet only at dawn and dusk.

In a sun synchronous orbit, the moon would always appear in the same phase to the occupants of the planet, since it always appears at the same relative angle to the sun.

The L2 location gets you what you want, but the orbit is not stable to perturbations. If your planet is in a system with other outer planets, like Earth, then this will occur, and my intuition tells me it would take less than 100 planet revolutions if the solar system is like Earths.
There are some stable orbits that offer compromises, but someone on the planet will see the moon during the day, at least some of the time.

Not the answer you're looking for? Browse other questions tagged planets moons astronomy orbital-mechanics .

9
Could I have an earth-like planet from which sun and moon would never be simultaneously visible?
5
A Possible Celestial Object Hidden from the Bright Side of a Tidally Locked Planet

12
What would a planet with no moon look like?
23
Realistic sky of an Earth-like moon orbiting a gas giant (length of day and size of celestial bodies)
15
How would a moon in geostationary orbit appear to wax and wane?
10
Details needed for day cycle of lunar world orbiting a gas giant
6
How do you determine placement of multiple lunar bodies in the night sky?
4
How does the day/night cycle work on a non-tidally locked moon?
0
What would the moon look like if its orbit was highly inclined?
4
How can I have an Earth-like moon?
9
How can an Earth-like moon meet these angular diameter conditions?
2
Is it plausible for a planet to have a face constantly sunlit while the other is constantly moonlit, with the sun/moonlit territories never changing?