What 3 wavelengths of IR light would be ideal for “Predator Vision”?

Alright, so I'm working on a setting with dwarves in it. I've been thinking that, to make things more interesting, certain clans would have the cone cells in their eyes see infrared light instead of the usual visible spectrum. However, I'm having a great deal of difficulty finding out what three IR wavelengths would be appropriate for their new primary colors. They usually live underground, but are known to be hired out on the surface for nighttime covert operations by various human factions.

So, they need to see in the 0-120F range, give or take. A wider spectrum might be more ideal though, I really don't know.

OK, there's a bit of a disconnect here, but I think we can answer your question. First, the disconnect.

You're saying "temperature," but you're confusing it a bit. You're describing the temperature we feel with our skin, which for the purposes of this question isn't the same thing as the temperature of light. For example, your water is boiling at 212°F, but that temperature is being created (often) by electrical resistance, which is emitting "heat" through power loss. A component of this thermal transfer is photonic, but most of it isn't. Therefore, when you put on some IR goggles you can "see" the hot stove element's IR emission — but you're not seeing something that is 212°F.

There's a difference between "heat" and "light." This is obvious when you consider boiled water and IR goggles. When you convert to degrees Kelvin, water boils at 373°K. But infrared light starts at a color temperature of 4,000°K — and gets colder as you get deeper into the IR range! Here's the sciency part of color temperature:

Which is a fancy way of saying "heat" and "light" are related, but not the same thing. Therfore, telling us that you're looking for something between 0° and 120°F doesn't make sense. Creatures see color temperature, not "heat." When things create "heat," photons are also created, and that's detectable as a color temperature.

So, let's talk about cones

So, let's completely ignore temperature and look at the wavelength spectrum of light (honestly, it's simpler this way). If you look at a visible color spectrum and draw three lines evenly distributing the spectrum such that 1/6th of the light is to the left of the first line, 1/3rd of the spectrum between the first and second lines, another third between the second and third lines, and the last sixth after that, you'll discover those lines basically center on blue, green, and red.

Your dwarves will enjoy the same basic evolutionary feature.

Let's not use the entire IR spectrum. That's actually really, really wide. Visible light is between 350nm and 700nm. Let's use that width for your dwarves. We'll round a bit for convenience and draw three lines at 760nm, 875nm, and 990nm. Those are the three wavelengths that would correspond to human blue, green, and red.

But does this help?

The funny thing is, unless your dwarves can also see the human-visible spectrum, these three numbers are meaningless to your readers because what they'll see are blue, green, and red. It just won't make sense when they try to describe color to a human.

Color is relative. Nobody sees color in exactly the same way as anybody else. But the absolute differences between wavelengths are not relative. Therefore, using "green" as the center point, the low end is blue and the high end is red. And it doesn't matter if you're talking about human-visible light or your dwarf-visible light.

Which is a very long way of explaining that you're probably barking up the wrong tree. You need to be thinking in terms of language, not temperature or wavelength. What would a dwarf call the "blue" end of their spectrum? Whatever word they use, it won't translate to "blue" in human terms, but it will mean "blue" in dwarf terms.

Passive Collection of IR light is very limited. Even the best IR night vision gear available today utilizes IR flood lights to provide extra IR illumination for the amplifiers to process. Passive IR amplification is only good out to a few meters under the best of circumstances. This is why Thermal optics are so heavily utilized today. There are animals that can see into the IR range, but they tend to fairly near-sighted and rely on other senses to supplement their poor vision. Military and commercial night vision gear usually falls within the 750nm to 950nm wavelength range, but all are nearly useless without also being equipped with an IR floodlight of the same wavelength that they are tuned to. Even under a clear sky with a full moon utilizing IR gear in passive collection mode is only slightly better than regular unaided vision is. I used IR gear a lot in my old life, and I can say that unless you have your IR floods on you are usually better off going unaided since IR gives terrible depth perception. 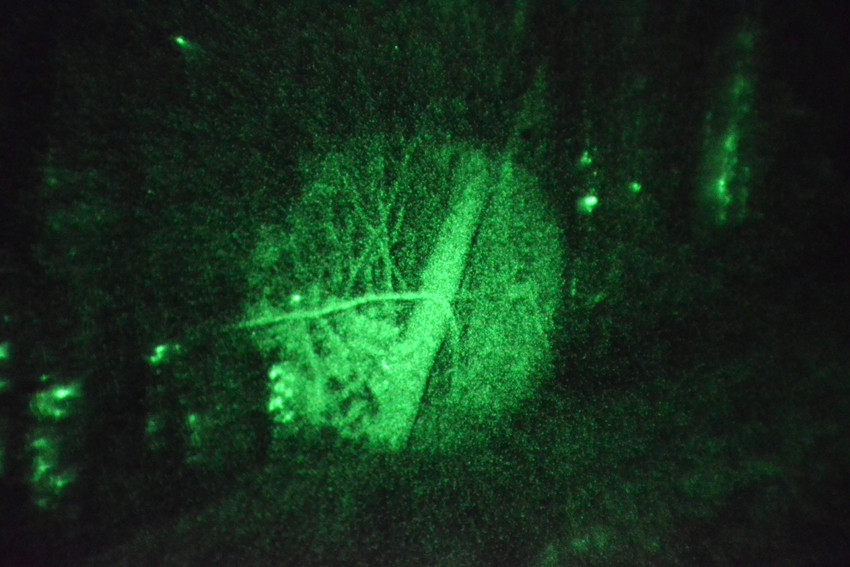 Also IR wavelengths are not measured in degrees C or F. They are measured in nano meters, or NM. The difference between photo-receptor detected IR light and thermo-receptor IR light is a very big one. Animals like Pit-vipers can see into the IR spectrum not because of photoreceptors in their eyes, but because IR light strikes a membrane within the pits under their eyes, this membrane is full of receptors which are always firing at a constant rate. The IR light striking this membrane heats it ever-so-slightly and causes a change in the neuron's firing rate. The brain sorts through these state-changes and interprets them as a very basic, very blurry image. Modern Thermal viewing gear like FLIR utilize a similar process too They cool their IR sensor to lower than ambient temperature so that any state changes caused by IR photons striking the sensor can be detected and interpreted by a computer. The vital part of thermal vision is that in order for it to work the receptor has to be at-least a little bit cooler than the surrounding environment, the cooler you can get a thermal sensor the higher the image quality and range of detection it can achieve. Perhaps your dwarves need to be cold blooded and have similar thermo-receptor pit organs to be capable or true thermal vision rather than simply passively collecting IR light. Honestly, either method is still going to have drawbacks. Snakes make up for terrible vision quality with a stupendous sense of smell and vibration detection. Likewise most animals that rely on the IR spectrum are not using vision as their primary sense due to this low image quality.

An example of thermal-receptor driven FLIR technology. Note improved image quality, but also realize this is from a cryogenically cooled system the size of a basketball with a receptor-array about 8 inches across. 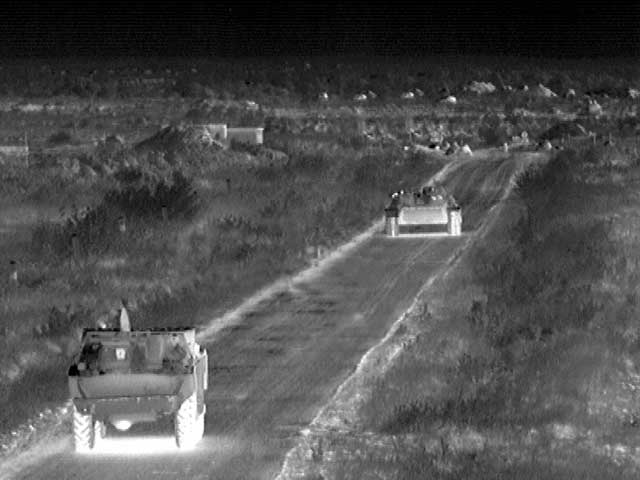 Bottom line is that military gear uses 750nm to 950nm for most of their optical IR while they utilize 3,000nm to 12,000nm wavelengths for thermal viewing. I believe I have outlined some of the basics of how either method works and the drawbacks inherent to both.

Not the answer you're looking for? Browse other questions tagged biology xenobiology vision or ask your own question.

9
At what point does sensitive hearing become a hindrance instead of an advantage? (For a predator.)
8
What are alternative particles to photons that would allow vision?
2
Could a land predator naturally evolve active night-vision?
6
What are the implications of multiple cooperating intelligent species with different spectral ranges for vision?
13
Could an organism see in infrared light as well as normal light, using its brain to process what it sees into a single image?
19
Would an alien lifeform be able to achieve space travel if lacking in vision?
39
What would be the ideal power source for a cybernetic eye?
8
Would color changing eyes affect vision?
15
See more colors?
6
What does a timeflow-doubled superhero see?