So, here's my issue. My setting's central conceit is that a myriad of human societies developed at relatively concurrent times across a large system separated by only a few light-hours. (There are, of course, a few tech gaps.) However, as these societies are all inhabited by pretty biologically similar humanoids, I'm looking to maximize the number of habitable planets I can create within the setting without straining my Hard Science Credibility (TM).

Should I run with a binary system? Trinary? Use a bunch of moons of otherwise inhabited planets? I appreciate any and all feedback.

Your best bet is almost certainly to park a gas giant like HD 28185 b in the habitable zone of your planet, and give it some roughly Earthlike moons. (This system should be stable in the long run, but it's difficult to tell, because our instruments aren't actually sensitive enough to pick up the moons of extrasolar gas giants.) Earth-sized moons with their own magnetic fields should have no problem sustaining life-bearing conditions, and you could probably fit four or five of them.

You can try to have multiple such planets, but I don't think they'll fit in your habitable zone for most stars. (Gas giants tend to be very far apart; Jupiter is almost as close to Earth as it is to Saturn.) My suspicion is that a gas giant forming in or near your habitable zone is going to vacuum up pretty much all the other mass into itself or its moons. In a system with an exceptionally broad habitable range, you might get a terrestrial planet orbiting inward from your gas giant which would be hot, but livable. (Your gas giant can push the outer boundary of habitability a little, since it will impart tidal heating on its moons, warming them somewhat.)

As far as stars, you're probably better off sticking to a plain old G- or K-type dwarf. (The Sun, or a slightly smaller, cooler star.) Hotter stars' radiance varies too much, and they don't live as long; cooler stars don't tend to output much UV radiation, which may or may not be a problem for biogenesis (another unsolved question, unfortunately). Binaries may help if they're similar in size, but I would worry that a mid-sized star/red dwarf combination (which is typical) would again have too much variation in sunlight.

Distant binaries or trinaries (or larger systems, which basically break down into chains of distant binaries anyway) would give you two stars with their own stable habitable zone orbits, which could both support life. However, it wouldn't be easily reachable; from a given star's habitable zone, the other star would be about as far away as Pluto, if not further.

All of this is assuming that you want life to have evolved on all of these planets. If you're okay with them evolving on one of these planets, the habitable zone opens up a fair bit, and if they evolved somewhere else entirely, you can do wacky things like orbit a black hole (mind the gamma bursts).

In old science fiction stories, it was common for three planets, Venus, Earth, and Mars, to be reasonably habitable for humans and to all have human or nearly human intelligent lifeforms at the same time. Possibly that would actually be the cases in our solar system if the masses and orbits of the three planets had been somewhat different.

You can see various estimates of the inner and/or outer edges of the habitable zone of our Sun here:

If you go with a wider habitable zone and make the planets orbit closer together then you can squeeze in four or maybe five planetary orbits around a star like the Sun.

And you could make some of the planets in the habitable zone double planets with both planets habitable.

Thus you should be able the squeeze in between four and ten habitable planets around your star. And that should be rare enough that you might have characters who know a lot about planetary science saying that the system is a very rare type, one in a thousand or one in a million.

If you have a group of planets orbiting around one star, or around both members of a close binary star, you can have another single or double star with planets orbiting it or them in your solar system, making it a double, triple, or quadruple system.

But each single star, or binary star, has to orbit sufficiently far from the planets orbiting any other single or double star in the system to not perturb the orbits of those planets. Thus at a minimum the stars (or close pairs of stars) in a multiple system must orbit at a distance several times that of the outermost planets that have stable orbits.

And if you need even more habitable planets in your solar system, then you might have it be such a rare type that it is one in a billion or one in a trillion. Or the characters might speculate or know that this particular star system was artificial, assembled by super advanced alien beings.

Sean Raymond, in his PlanetPlanet site, has a section devoted to designing star systems with many habitable planets - tens, hundreds, or thousands - that would have to be created by super advanced civilizations instead of coming into existence naturally.

Wow! He's up to a million planets now!

You could have a few gas giants located within the habitable zone orbited by habitable large moons. A much smaller star with habitable planets of it's own is also in a Trojan orbit around the main star. 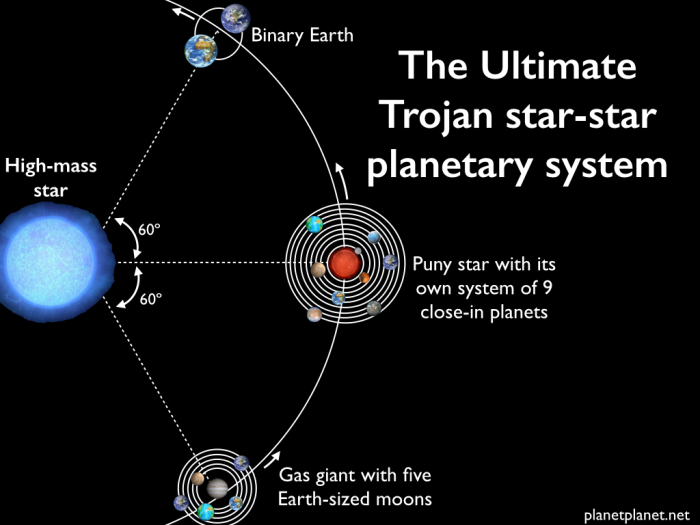 You could also have two habitable planets in a binary system orbiting each other as they orbit the main star.

Gas giant planets do have a problem: They are extremely radioactive. Any earth-sized planet able to host life orbiting around said planet should have one heck of a magnetosphere and a very thick atmosphere to filter those nasty particles. Life there is conceivable deep in the oceans, under a thick layer of ice, but humanoid? Hmmm....

You'd be luckier coming up with a relatively healthier magnetosphere for a planet orbiting a red dwarf. Only thing: the Goldilock zone, there, would be too narrow. You'd need a binary earth, or two planets with very close orbits.

High mass star have a very short life and emit a LOT more radiation. The habitable zone should be way cooler if the planet needed to host life without being cooked. So the inhabitants would live a relatively primitive life on an ice-barren world. they'd look more like yetis

Not the answer you're looking for? Browse other questions tagged science-based space earth-like stars or ask your own question.

21
What kind of star should I use for my world?
6
Celestial arrangement for the Cube World
10
What would be the most-optimal location for the Lunar Radiotelescope?
3
a habitable planet orbiting a Neutron Star that moves through galaxies
12
Choosing axial tilt for human habitable planet for largest temperature variations
1
Optimal wavelength for an interstellar communication laser
7
Optimal shape for hypervelocity kinetic projectiles from space
13
Are these climate zones somewhat realistic?
3
Which Stars Would Best Suit For the Habitable Zone of The Nine Norse Earths?