Feasability of having a voice modulator bioengineered into vocal chords?

I'm writing a story and I was wondering on the feasibilty of having a set of bio-engineered vocal chords that would have a voice modulator built in to help disguise the characters voice, would it be possible for someone to find out what the character really sounds like?

To my knowledge the way this is done normally is because when an external voice modulator is used, there is still the normal voice before it gets modulated, and you just run it through a program that allows you to modulate it back to a normal sounding voice. If there is no normal voice in the first place is this still possible?

You Want A Syrinx Instead of A Larynx

Parrots can modulate their voices and produce a far wider range of sound because instead of a one-way Larynx they posses a Syrinx. With humans our voices are produced by the air running through a single passageway in our throat. A Birds Syrinx is an inverted Y shape with an expandable air sac that allows air from both lungs to be used at the same time like ours, or only air from one lung at a time. Additionally instead of vocal chords they have a vibrating membrane attached to this air sac. By expanding and contracting this air sac they can not only more accurately control the airflow across this membrane than we can, but also change the resonance of their voices as well. Something one can only kind of do with expandable/contractible vocal chords within a larynx.

This means that a person who had been somehow bio engineered to posses a functioning Syrinx could cover a far wider range of sounds and frequencies than a normal human. Here's a highly simplified picture of how a Syrinx works. 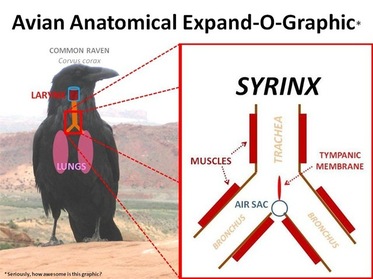 Keep in mind that when a person is caught by police who happens to have exactly the wrong body part needed to say that they were capable of making the voice in the phone call then they are as good as caught anyways. Unless having a Syrinx installed is all the rage and everyone has them then if your person gets connected to the call by other evidence its as good as a smoking gun that they made the call. Kind of like how burning your finger-prints off would make you pretty much the only guy who leaves blank fingerprints at a crime scene and thus wouldn't make you any harder to connect to the crime or any less reliant on wearing gloves to avoid leaving prints.

Not the answer you're looking for? Browse other questions tagged biology bio-mechanics .

7
How would having two pairs of vocal cords affect the voice of a humanoid?
8
What is the earliest age an actual baby can use his vocal chords to speak?
10
Creating a scientifically semi-valid super-soldier, part 8: Communication
13
Nanomachines exist that enable Axolotl-levels of regeneration - So how can crippling injuries exist as well?
5
How to survive a fall from a skyscraper by having super powers to turn yourself into mushrooms?
4
Why does my anti-aging process stop maturation?