How large could my sea serpents be?

EDIT: (Important) M. A. Golding commented that the regalecid method of locomotion would be unfit for a constricting predator, so I have completely redone the taxonomy of the sea serpent. They are now eels, closely related to moray eels. The sea serpent taxon has been upgraded to family Serpentimaridae, as opposed to the old subfamily Serpentimaria. I don't have time to draw up a dendogram right now, but they're in the suborder Muraenoidei, in a clade with moray eels.

I think that the current lack of answers is because I have not alluded much information as to the physiology of these animals. Here is a rough sketch I made in Paint (Originally a preparatory draft for a real illustration of sea serpent anatomy): 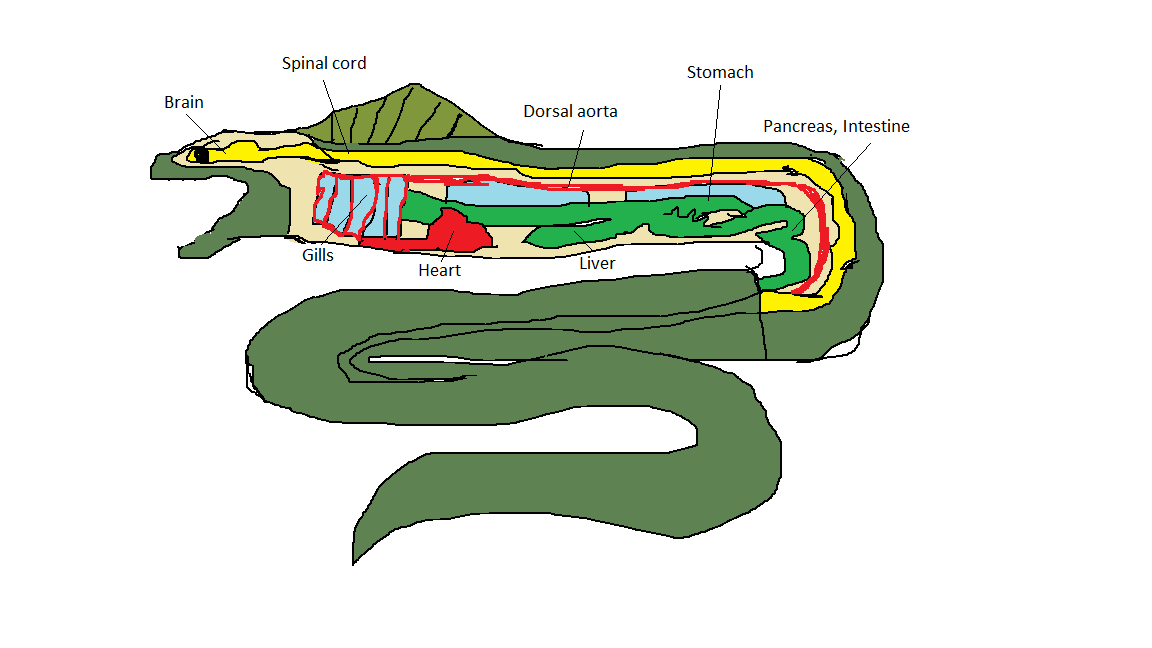 Note: the reproductive and excretory systems are not shown here, but do not affect their potential size anyway so it shouldn't matter.

So, if the heart needs enlarging, or I should have a bundle of ganglia towards the back as an extension of the CNS, or any other amendment, please let me know. Hopefully, I'll get some answers now that I have clarified a bit more.

This is currently the sixth question about my ongoing worldbuilding project on viable fantasy creatures. I'm too lazy to link all of them here, but the last two were: What kind of animals are my trolls? and How can I explain the evolution of my giants?. You can find links for the rest at the latter.

Now, from giants and trolls we progress to the largest creature in my project, the sea serpent (Subfamily Serpentimaridae). These beasts are not serpents but fish, in the suborder Muraenoidei.

I want these serpents to be massive, at least the length of a blue whale - and upwards from there. Seriously, if the answer is "600 metres", then I'll take that. But, I rather doubt that a fish could grow to a length of 600 metres (Feel free to prove me wrong), so I'll have to find out what's rational and what's not.

Sea serpents are constricting predators, like boas, and use their musculature to crush whales - and, on occasion - ships. They also have pharyngeal jaws, like their close relatives the muraenids, which allow them to swallow a rowboat whole.

I haven't figured out what oceanic zone they'll inhabit, but any is fine for me really. Deeper zones would be convenient as an explanation for why they've remained undiscovered, except for reports by sailors throughout history. They need to be large enough to be able to create waves with lashes of their tail, as well.

To summarise: How big could Muraenoideian sea serpents be?

To answer your question, consider how thick would be the body of the largest animal you intend your sea serpent to prey on by constriction.

If, for example, the prey has a thickness of 1 foot and is perfectly cylindrical, it will have a circumference of 3.14 feet. If the sea serpent wraps around the victim three times and has length left over, it must more than 9.4 feet long. And the giant snakes known to science would usually be 10 to 20 feet long if they attacked prey a foot thick.

If, for example, the prey has a thickness of 10 feet and is perfectly cylindrical, it will have a circumference of 31.4 feet. If the sea serpent wraps around the victim three times and has length left over, it must more than 94 feet long. It could easily be 150 to 200 feet long accounting for the extra neck and tail lengths.

I point out that the longest prehistoric or contemporary animals known to science had or have lengths in the region of 100 to 200 feet. And some scientists find such lengths amazing because of various factors including the time it takes for signals to travel the length of the body along nerves which sometimes are single immensely long cells. Some scientists would claim the longest animal proven to have existed must have been the longest animal possible, while others would say that longer animals might be possible.

Or, if you decide that your sea constrictor should have a certain width, you can calculate what its body mass would be at various lengths. If it is carnivorous it shouldn't be much more massive than the largest known present day or prehistoric sea carnivores or it probably won't be able to feed itself.

I think that a combination of those methods should enable you to decide what size your sea constrictors usually are, though of course there could be freak exceptionally small (boring) or large (terrifying) specimens.

I can't help thinking that even the smallest monster you might decide upon would be horrifyingly large.

11
What kind of animals are my trolls?
8
How can I explain the evolution of my giants?
11
Viability of Scansoriopterygid wyverns
5
What theoretically is the limit or max size and length for a serpent/worm before they get crushed by their own body?
5
What would be the physiological/anatomical adaptations of a 50 metre sea serpent?

8
How can I explain the evolution of my giants?
5
What would be the physiological/anatomical adaptations of a 50 metre sea serpent?
6
Eating one whale every three thousand days?
10
What attributes and how big would a sea creature(s) need to be to tow a ship?
3
How large could sea creatures grow on a terraformed Ganymede?
5
How large could an aquatic humanoid get?
2
How and why would the sea-scorpion wound those who hold it?
9
Why would water-serpents have multi-arched bodies?
1
Could whale-sized creatures propel themselves through the sea by expelling water like a cephalopod?
8
How might barnacles be made into giant sessile sea creatures?