This one’s a bit of a stretch, so bear with me. The classic monster in table top games and video games alike: a monster that can imitate the shape of things (mostly treasure chests) to lure in people to eat.

For those who are unfamiliar with mimics, their classic natural form is an opaque brown amoeba that secrets a super-glue like substance. In feet (hah), it's 5 by 5 by 6... which makes treasure chests convenient for them to imitate, since they're of similar dimensions. When adventurers approach the "treasure chest," the mimic reaches out with a gluey pseudopod and grapples the adventurer, eventually consuming their victim.

So, is it possible for these to exist?

There's and entire genre of monsters like this in D&D. The following video is a great intro to them.

In theory it could evolve... however, it would take a long long time.

It's possible that a somewhat chest shaped (but not looking creature) hiding in a darkened room could be mistaken at first glance by a human, and this trait is what evolution picked to continue forward and over a few thousand years those traits continued to succeed. Thus it became more chest looking, but it would still probably only work in a darkish room, where the mistaken identity would be easier.

But there are a few other options:

Does it have to be natural?

If magic was the answer then this would be easy, but even without magic, selective breeding can yield the required results a lot lot faster than conventional evolution. Maybe some organisation wanted a treasure guard, and so over a hundred or few hundred years selectively bred a creature to look more and more like a treasure chest. This has been done with racing pigeons a long time ago I admit, but a pigeon breeder (can't find the article now) over a hundred years ago said he could give you a new breed of pigeons in 25 years.

Now these would still be pigeons, but they would look different enough to be classed as a new breed, same thing here. But it is only so quick with pigeons because they have such a fast reproductive cycle.

You need the organisation to want to create this crature and to spend the time selecting the correct traits to breed them and hope that those traits as passed down. And then once they look close enough, breed the aggression into them...

Does the chest have to be alive?

It's a stretch from you original concept but have you considered creatures such as hermit crabs? They find existing items and turn them into their homes, they'll find suitable sized shells that are naturally around the world and then get inside and walk around. It has been documented on a few occasions that they will climb inside empty food cans. It's possible that another creature could have evolved that needed the space of a treasure chest, i know this is not exactly the same thing as the chest itself actually being a live creature, but it's a possible workaround...

Octopuses shape shift, and could squeeze into a form resembling a chest. Chameleons and octopuses control their coloring. Make them intelligent enough to identify human-crafted objects and imitate them.

An issue you'll face is its hard to walk around without solid bones. So your creature doesn't move a lot. It evolved by imitating fruit trees that different animals were drawn too. It can also likely emit scents. It camouflages itself like a rock, and striking like an alligator when a foolish deer comes too close.

As a result of humans hunting to kill it and trying to in turn prey on humans, it grew intelligent enough to notice human-crafted items such as chests and imitate those. It grabs nearby sticks to prop itself up to a square-like shape. The idea that a competent adventurer knows these exist, sees one, and doesn't realize is a bit of a stretch, but should pass in a book as long as the creature doesn't use the same shape every time. In reality, it would probably imitate rocks, or cover itself in leaves and mud instead.

As for the glue, that's easy. Spiders create glue. Your beast could easily make a gluey saliva, or one with neuro-toxins as well, and spit it on its prey.

For a creature to evolve specifically to fool humans by disguising itself as furniture would imply that it had spent millions of years lurking within human settlements evolving along side us. It might make for a fantastical fantasy device, but I just cant see any plausible scientific explanations for a creature that looks like a manufactured human item. I can see stuff like an inviting pool that is really a colony of neurotoxic ameoba functioning like a super-organism or something. I just cant figure out how to explain something that looks enough like a wardrobe or a chest or something to fool a human.

The only semi-plausible way I could explain such a thing without a lot of hand waving and "magic" would be a nanite swarm, but now were talking robotics instead of anatomy.

They don't mimic, they appropriate.

the manga Delicious in Dungeon has a great take on mimics. They are basically giant terrestrial hermit crabs, they appropriate larger and larger objects to hide in as they age. in dungeons or cities large ones often use furniture like chests or cabinets. They are ambush predators waiting until darkness or something disturbs the to move. They always match the environment because they use things from the environment.

Honestly the series is a great take on how to make dungeons and monsters functional and plausible.

You don't have to use hermit crabs but a similar behavior where the creature uses existing furniture as a shell the same way hermit crabs do will be the most believable way to have them look like different man made objects. WHat the exact anatomy of the creature is is more open and depends on how you want them to attack, long tentacles and a sharp beak for biting could come from some kind of terrestrial mollusk a "hermit octopus", or something like an "Hermit Otyugh" might work even better. 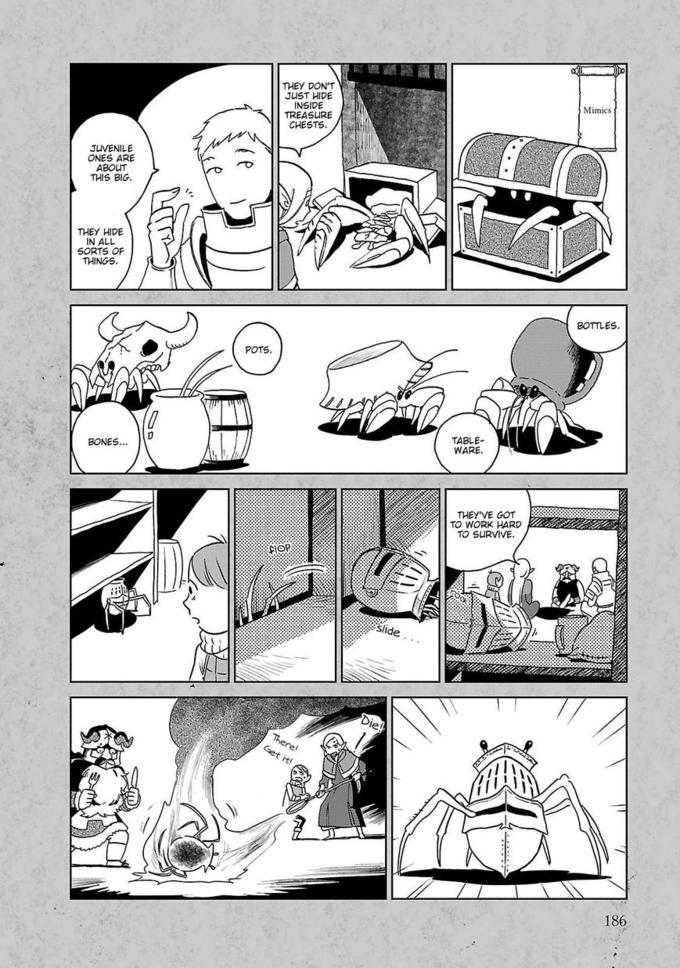 I don't see the amoeba part working in real life. I could see the mimic evolving out of an alligator snapping turtle or an oyster...

...or maybe a plant. It would use bark to imitate the wood of the chest, and could snap and secrete a gluey substance like a Venus flytrap.

I like the idea of using hermit crab tenancies with the described "natural state" as being an amorphous blob, (imagine Gastropod such as a giant slug), or perhaps an octopus like body, as the basis for a mimic. As others stated, it could simply obtain a new "shell" as it grew in size. I imagine it breaking apart a container in order to empty it, and then use its adhesive pseudo-pod limbs to collect the pieces into a protective and/or camouflaging shell, much like an octopus collecting coconut shells to hide in. A large mimic may find a room in a dungeon and take residence there, thus the door mimic. A VERY large mimic might find an abandoned cottage for its shell, becoming the House Hunter.

Not the answer you're looking for? Browse other questions tagged reality-check creature-design mythical-creatures urban-fantasy .