Could there be a planet bigger than Earth, but with less gravity?

Is it possible to have a planet that is both bigger than Earth and weaker in terms of gravity? I've got an idea about it being less dense, but I don't know what to do about its magnetic field. I need to know this because I desperately want to write a short story involving human-powered flight with artificial wings. To clarify, what would the requirements be to have a planet larger than Earth, with weaker gravity, and a magnetic field strong enough so that people don't need extra protection from solar radiation?

Bigger planets don't always have greater masses. Remember, mass and volume are related by $$M=\rho \frac{4}{3} \pi R^3$$ where $\rho$ is density. Make $\rho$ small enough and the gravity and be as weak as you like. So the answer to the title question is a firm "yes." I did some playing around with this based on mass-radius relations by Seager et al. 2008 and created a modified plot of mass and radius based on several different compositions: 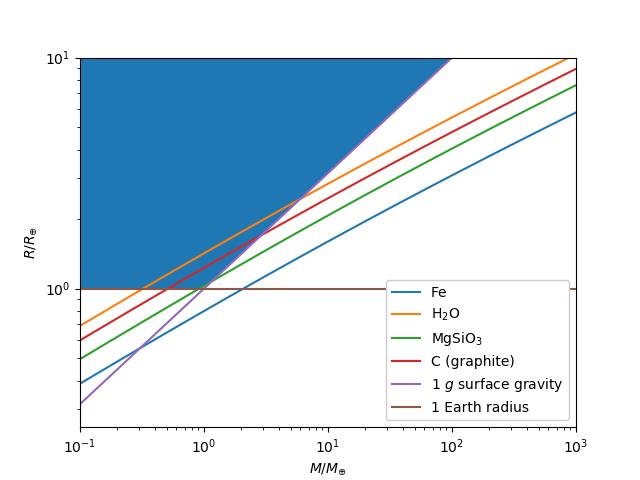 The blue shaded region is the allowed subset of parameter space with planets satisfying $R>R_{\oplus}$ that have surface gravities less than Earth's - the properties you want. Very few terrestrial planets occupy this area, and few are primarily silicates, like Earth. Your planet is likely to have significant quantities of water and may be an ocean world.

with weaker gravity, and a magnetic field strong enough so that people don't need extra protection from sun radiation?

This is trickier. According to the dynamo theory, the magnetic field is governed by the induction equation $$\frac{\partial \mathbf{B}}{\partial t}=\eta\nabla^2\mathbf{B}+\nabla \times (\mathbf{u} \times \mathbf{B})$$ where $\mathbf{B}$ is the magnetic field, $\mathbf{u}$ is velocity, $t$ is time and $\eta=1/\sigma\mu$, where $\sigma$ is the electrical conductivity and $\mu$ is the permeability. Note that nowhere in there is a term involving the radius of the core. In the nonlinear theory, density does come into it. But that's the density of the material in the core. The planet could have a large mantle that contributes significantly to its radius. So the magnetic field can be any (reasonable) strength you want; it might not be impacted by planetary radius.

The tricky thing is that while the magnetic field protects us from the solar wind, we also have to worry about UV radiation. That's why the ozone layer is our saving grace, so to speak, and why its depletion by chlorofluorocarbons is such a big deal. I bring this up because a planet with certain characteristics (i.e. much bigger and yet less massive) will have a weaker gravitational pull on its atmosphere (with the strength depending on radius and mass).

Lighter gases escape easier from a given planet than do heavy gases. That's why the Earth lost any primordial hydrogen and helium envelope it might have had. Make this planet too big and you risk losing ozone. Sure, the planet would have to be pretty big (while staying at the same mass), but it could happen. A stronger magnetic field might solve this, but its contributions might not be too great.

A strong magnetic field comes with a heavy iron core, so a significantly lower density than Earth is probably out.

Fortunately, a magnetic field isn't the only way to get protection from radiation. A thicker atmosphere will block a lot, with the added bonus of making it easier to fly.

You also have the option of accepting a certain amount of radiation, especially if you limit the time spent outside. Sleep underground, and you can handle twice as much radiation when you are out flying around.

The low gravity and solar wind exposure may make it hard for the planet to hold on to an atmosphere, but that would happen over millions of years. Native life may not have time to evolve, but it wouldn't be a problem for humans visiting or for life introduced from elsewhere.

If you want terrestrial planet I strongly suggest to take a look at this video The Trouble with Terrestrials that explain what are the bound of the terrestrial planet it is based on this paper check chart on page 19 on what are your choices regarding planet size and composition.

Uranus has a gravity of 8.69 m/s2 at the surface, compared to Earth's 9.81, and if I recall correctly it is somewhat larger than Earth. (I just happened to see your question and looked this up - you didn't technically rule out that the planet is a gas giant, though it's probably not what you had in mind.)

Just a bit belated on the answer, but assuming that human-powered winged flight is your primary goal, and not the planet's size or gravity, then a thicker atmosphere may be the way to go. It's been speculated that the atmosphere on Titan could easily sustain human-powered flight.

-1
how to build a planet larger than earth, but has the same gravity?
25
What's the biggest reasonable natural planet or moon with Earth-like surface gravity?

10
What are the requirements for an atmosphere retaining moon with a stable orbit around an Earth-like planet with non-destructive tidal forces?
6
Antimatter planet on normal matter star
7
Could a planet larger than earth with half the gravity have a denser atmosphere?
4
Relative size of Alien beings on another planet
2
How similar or different can an exoplanet be, that supports a convergent evolved ''human'' species?
25
What's the biggest reasonable natural planet or moon with Earth-like surface gravity?
29
5km artificial planet, with same gravity as on Earth
3
Could black hole civilizations even exist?
7
How do I give my planet a stronger magnetic field? Playing with variables