How can I explain the evolution of my giants?

Note: this is not a duplicate of Anatomically correct Giants or What would be the tallest possible height for humanlike creatures in earthlike conditions? because my giants are far from humanoid. Anyway, the main question here is why they would evolve rather than how they would evolve.

This question is one about my ongoing worldbuilding project about viable mythical creatures and how they fit into the modern ecosystem. The last three were: Is petrifying vision plausible in an animal?, Hydras as parasitic-mating, polyandrous amphibians? and Are wing-walking griffins viable?

This question will be about another important creature in the project, the giant. Most fantasy depictions of giants show them as massive humans, but I'd rather shake things up a bit. In my project, giants belong to the clade Tethytheria, with their closest relatives being the rhinoceros-like Embrithopods.

Here is a rough dendrogram of giant phylogeny I made (The taxon at the end of each lineage represents a Linnaean order): 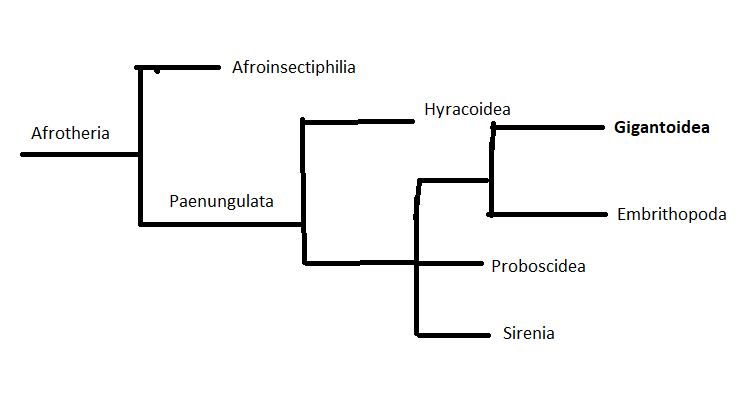 The giants are the order shown in bold, Gigantoidea. Edit: I forgot to include the clade Tethytheria when annotating the dendrogram, it should be above the line that leads to elephants, manatees, embrithopods and giants.

But why would very large quadrupedal browsers evolve bipedalism?

The ancestors of my giants would have looked something like this, but not necessarily horned: 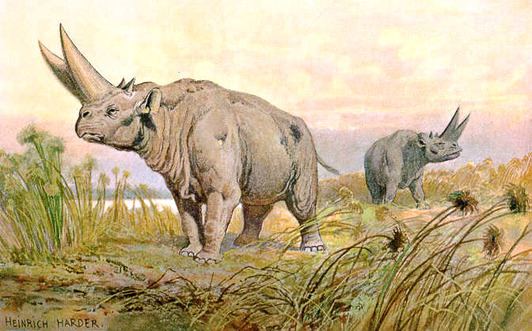 And now, they are bipedal and 10-18 metres tall. What evolutionary reason would cause this to happen? Why would heavy, quadrupedal herbivores end up as bipeds?

At the moment, that question is a bit broad, so I'll give you some information about the giants I have in mind.

Giants spend most of their adult life dormant, hibernating half-submerged in the earth. During this time, plants will often grow on their backs. The giants absorb nutrients from these and the surrounding soil to sustain them in their sleep. However, they require nutrient-rich soil to survive. Thus, they rise every 200 years to predate the hydras (Their mass births occur at the same time, and they emanate poisonous gases that, in large quantities, have a very negative effect on the soil's nutrient content).

They also reproduce at this time, and baby giants spend about 20 years roaming and growing before their first 200-year hibernation. Their longevity is because of their size and inactive stages.

So, with that information in mind, consider this: What would cause quadrupedal Embrithopods to take on a bipedal posture? I suggest reading up a bit on Embrithopod ecology, anatomy and physiology should you require further information.

If you find this question broad, missing details or having errors, please let me know and I will amend the question as soon as possible.

Your hydras are already a threat to the giants. I'm not sure if you've explained their poison yet, but it sounds like a great way to kill off some nearby giants for a quick calorie boost during mating season, either for energy to mate or to provide easy food for the young. The giants, when they were quadrupeds, were pretty helpless against the hydras. Charging isn't a great tactic against serpentine, multi-headed creatures. Hands, on the other hand (pun intended) are quite useful for grabbing those snaky necks. They also make it much easier to "un-dig" oneself after being awoken from hibernation by a hydra bite. Larger size makes for thicker skin, which means the first bite is a lot less likely to maim or kill.

Side note - I know I said I was focusing on threats, but large size also means more surface area for absorbing nutrients, especially if they have long limbs and digits that can act like roots.

I know your world is filled with other myth-inspired beasts, so I'm guessing there's probably at least 1 aerial predator to deal with, too. A bipedal strategy allows a lot more options for fighting off an attack from above, and large size makes the giants much harder to carry off. The adults would have been plenty large already, but perhaps the young were small enough to be carried away? As the species grew larger, even the young were too heavy to be taken. The thicker skin is helpful here, too, for surviving talons and bites.

I have one more rather unconventional idea for explaining size. Camouflage. Usually, smaller is better for this, but the giants are using plant life to hide themselves while buried, and a conventional size doesn't allow much to grow, and certainly nothing large could grow without growing roots into or around the giant, killing or trapping it. If that doesn't happen, it's hidden by the moss, but that large area where nothing but moss is growing is a bit suspicious... Once large enough, though, the giant could have a very thick hide that is quite effective at holding roots, allowing bushes and small trees to grow, which hide it a lot better. When out of the ground, it may even be able to pass for a tree at a distance, if it's gathered enough growth and is thin enough.

That's all I've got for now. I hope it helps!

Trees, in a world that goes from prairie to forest due to climatic changes the bipedal form becomes advantageous to herbivores of all sizes. Wide grasslands that shift through scrub and into climax closed canopy forest cover as the climate warms and rainfall increases over geological time. This would probably be because of continental drift rather than a post-glacial warming event, but either is technically possible. The grazers on those glasslands have to evolve new strategies to feed as the height of feed stock rises or they die out, the shifts are gradual but culminate in a bipedal giant cropping acorns right out of the tops of old growth oak forests in a similar way to Giraffes feeding on the top leaves of Acacias.

Well in nature a lot of excessive and often counter survival characteristics can emerge from sexual selection. A good example are birds, huge colorful feathers that makes you visible for all the predators are not exactly a good survival strategy, but when mating the most visible male birds have an edge over those who aren't that colourful. Because of this sexual dimorphism in those species its usually very noticeable. In your story it could be that the female giants preferred those who could stand higher in a mating dance, eventually this lead to bipedalism in males and that trait got passed on to the females of the species. In that case the females would usually be a lot smaller than the males and a lot more agile.

Not the answer you're looking for? Browse other questions tagged creature-design evolution fauna .

20
What would be the tallest possible height for humanlike creatures in earthlike conditions?
8
Is petrifying vision plausible in an animal?
11
What kind of animals are my trolls?
9
Anatomically correct Giants
13
Hydras as parasitic-mating, polyandrous amphibians?
11
Viability of Scansoriopterygid wyverns
10
How large could my sea serpents be?
8
Are my wing-walking griffins viable?

6
Non-predatory evolution
3
What evolutionary pressures could turn a group of divergent hominids into matriarchal giants?
5
What would be the ideal terrain for promoting the evolution of blade feet that sink into the ground?
13
Hydras as parasitic-mating, polyandrous amphibians?
8
Are my wing-walking griffins viable?
10
How large could my sea serpents be?
11
Viability of Scansoriopterygid wyverns
6
Alternate paths to orthostasis
2
How two-limbed creatures could evolve powered flight? ("wingless" bird)