Watching TV series The 100 reminded me of one huge flaw of Fallout shelters.

(Spoiler ahead, I think?)

Most of the bunkers depicted in popular works have one huge design flaw:
There is only one entrance to the fallout bunker

Examples: Games Fallout 1 and Fallout 2 show atomic bunkers with only one exit. (I haven't played any other Fallout game, shame on me.)

Most of the bunkers shown in the TV series The 100 also have just only one exit.

I understand, that if you want to have a bunker strong enough to survive an atomic blast, you have to seal it as much as possible, therefore having only one exit from the bunker is a reasonable idea.

However, having just one exit from the bunker creates a huge design flaw. For instance, if a bunker is under a building, such a building can collapse on such an exit, literally trapping you inside.

Yes, it creates nice plot ideas, however it feeels pretty dumb. Because, you just survived a freaking atomic blast, just to be killed by not having the possibility to go out and therefore starving to death.

To clarify: I am designing "both in one." I want to have a bunker, possibly under a building. This bunker has to survive a nuclear blast, which results such building collapsing on it. Then, such bunker should be able to keep 1200 people alive for about 5 years. After that people should be able to go out and seek for food.

Plausibility of the rest in the specification is solved. Assume the bunker is capable to do all of above, when answering, focus on the exits and possible drawbacks.

Please keep in mind, that I want to have reality in check. So the design does not to count with possibility of building collapsing. Say the bunker itself is on the outskirts and you do not actually expect direct hit.

And now for something completely different...

If you can afford to build a shelter for 1200 people for 5 years - food, water, energy, medical supplies & facilities, etc. then you can afford a tunnel boring machine: 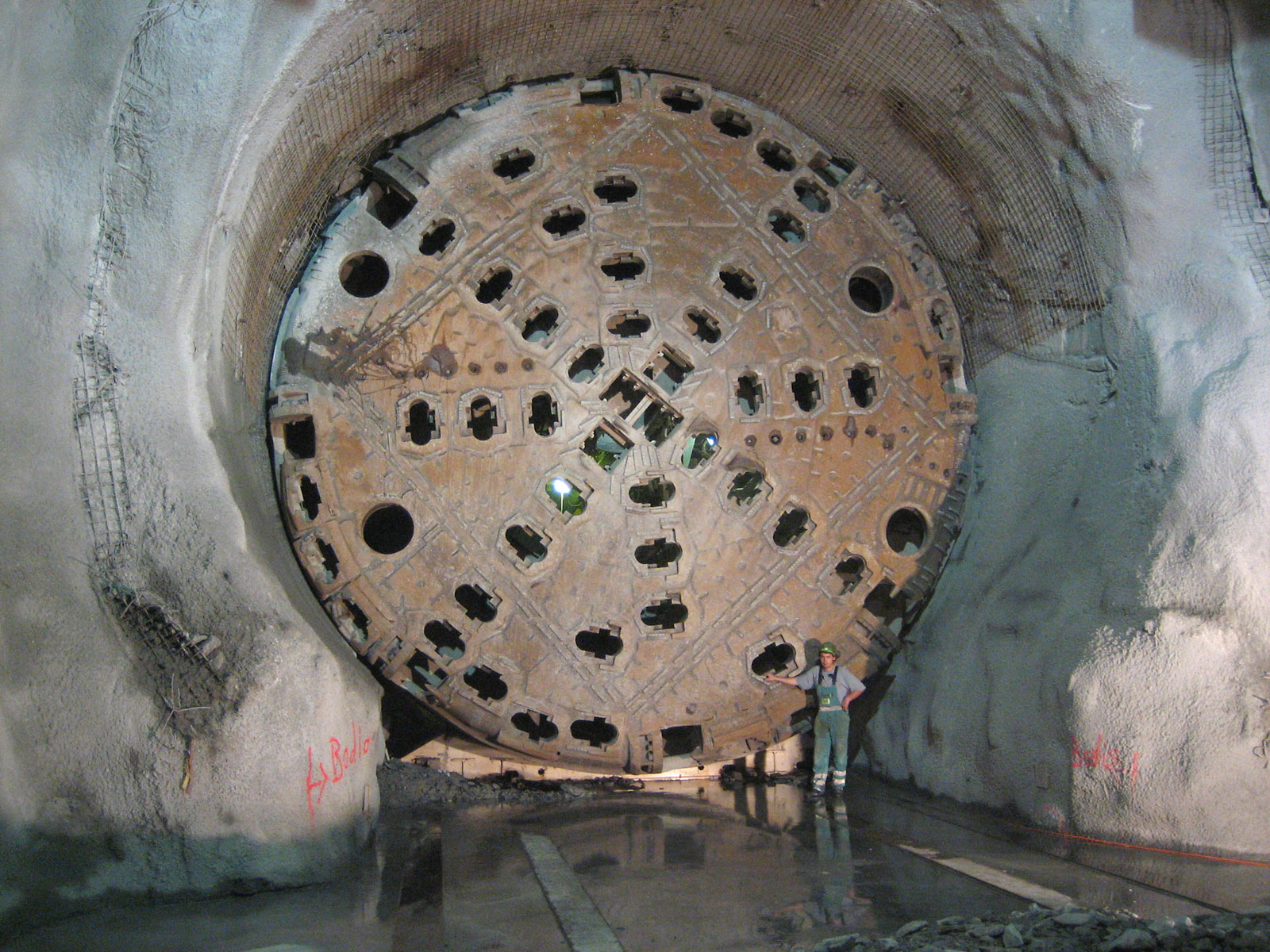 Actually, you don't need a really BIG boring machine. Something designed to dig an 8' diameter tunnel would be sufficient. You map out possibilities before you go in, and when you are ready to dig out, you just start boring!

You have a small tunnel that leads to a hatch which opens inwards. This hatch has been buried by 4 feet of loose sand. This way the emergency exit is hidden, and since the hatch opens inwards it cant be blocked by putting something heavy on top of it. Thats what all the actual nuclear silos use. You bury the escape hatch under sand, then make the top foot or so regular topsoil and get grass to grow over it. My neighbor's job was manning nuclear silos and he talked about how theyd actually forgotten where one was and paved over it. He said the guys manning the silo werent too happy to discover that should they need to escape theyd dig through all the sand just to hit concrete.

Multiplying the access points you multiply the points of potential failure in containing the radiation out. Therefore, as you state, it is pretty logic to have just one entrance/exit.

There is no point in worrying about exiting a shelter if you will die of radiation poisoning in that shelter.

To deal with the situation you mention it's way better what it's done in the shelter design:

With the radio communication you can:

You might object: what if no living person is around and I still want to exit?

Well, if no living person is around you can safely bet on high radiation levels. Therefore you are just asking for a different way of achieving death. I think a pistol with a single shot would be the best option at this point.

Not the answer you're looking for? Browse other questions tagged reality-check post-apocalypse apocalypse or ask your own question.

3
Long-term ecological effects of a global (but strategic) thermonuclear war
19
Anatomically Correct Sleipnir
5
Apocalypse design help. Is there any life-sustaining atmosphere which an atomic blast could ignite?
25
Is it safe to grow and eat food on post-nuclear-war land?
6
How long could we preserve technology post-apocalypse?
18
Designing a river which does not overflow
4
Could there be a situation where a plane would be certain to be destroyed by dropping an atomic bomb?
5
After a major nuclear war/disaster, how much radiation would remain after ~300 years?