How many tectonic plates should my planet have? And why?

While constructing a planet, with the same mass, volume and overall composition as Earth, how do I know how many tectonic plates should it have? And what does having more or fewer tectonic plates change?

Obviously there are lots of unknowns here, but you can make some good guesses just by reasoning through the details (kind of like how, even if you'd never seen a planet, you could work out that all planets have at least one cyclone, due to the hairy ball theorem). 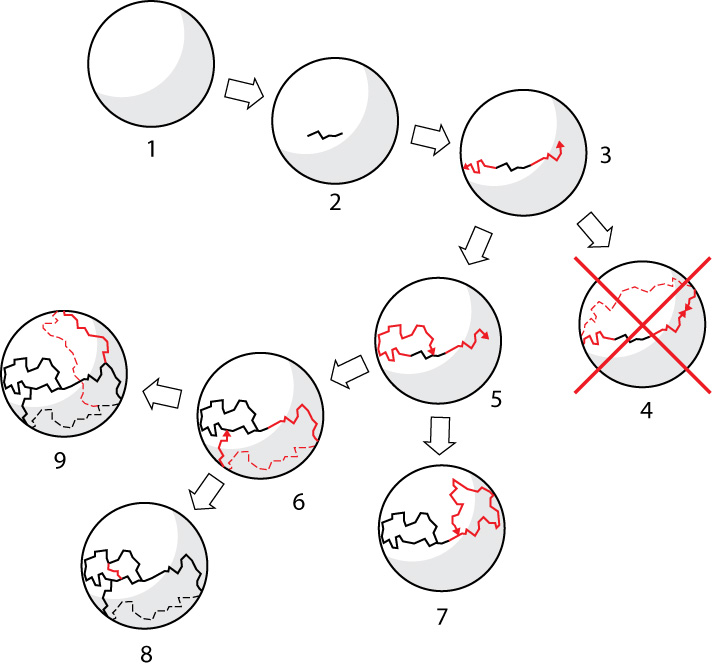 So just from this topological reasoning, we can assume that your planet will have at least three plates. That's not nothing!

We also know that the larger a plate is, the more stress it experiences. Also, that relationship is non-linear (because of the nature of the forces involved combined with the square-cube law). That suggests two further ways to get more information.

If nothing else, I think I have convinced myself here that an Earth-like planet could be expected to have an Earth-like number of tectonic plates (perhaps 5-10 major ones).

There may not be a formula for that, but if all the parameters are similar to earth, having a similar number of plates seems a reasonable guess.

More or less plates would mean more or less mountain ranges, fissures, and faults. Mountain ranges are formed as plates press against each other and the earth is heaved upward, fissures and trenches as one slides under the other. Faults are cracks on the plates formed by pressure - occasionally they shift...well, I'll let Superman explain...

it's the joining together of two land masses. The fault line is unstable and shifting, which is why you get earthquakes in California from time to time.

Less plates might also mean the geography of the planet might not change as much over time. Less plates mean less movement of the land masses.

First, since you are comparing this planet to Earth, having the same mass, volume and composition, it helps to know what earths tectonic plates look like. 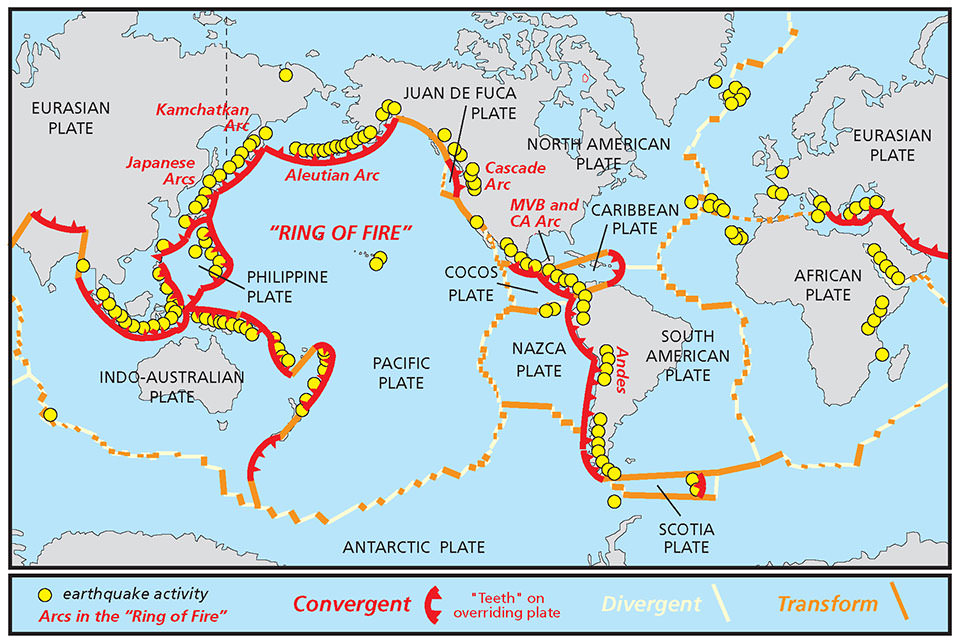 Earth has seven major plates and ten minor plates, as well as many micro-plates. To answer your second question, what does having more or fewer plate tectonics change?, it would mainly change what your planet looks like. These tectonic plates create volcanoes and mountains, depending on how the plates are merging. This means that along plate boundaries, there are usually either islands in the oceanic places and mountains along the inland areas (this is all dependent on the tectonic plate interactions, which I talk about below).

Other than how violent your planet is, a significant reason for our atmosphere is from these plates with volcanoes spewing carbon into the atmosphere. Having more plates and thus more plate tectonics would likely result in a more robust atmosphere. Or, at least, it would take less time for your planet to have a habitable atmosphere, and likely produce life quicker than Earth.

How many plates you should have is totally up to you. However, I would recommend you at least have a couple if you want your new planet to be similar to earth.

Roughly speaking, because I started to write "a deep time approach to worldbuilding" outlining my preferred technique then realised I'd be here all week, decide how many continents you want to have, on Earth there are 7 and how many active mountain ranges you want in the continental interiors, on Earth we have 2, the Himalaya, and the Southern Alps (most of the "continent" around New Zealand under the South Pacific but it's there).

The total is roughly how many major plates you need, Earth has 7 major and 6 minor plates; active mountain ranges, like the Alps (both European and Southern), Andes, Cascades, Himalaya, Japan and the Sierras mark plate boundaries as do major ocean basins, the Mid Atlantic Ridge, East Pacific Rise, Southern Ocean spreading ring. How these boundaries migrate and change over deep time is governed by plate tectonics which we still don't understand all the driving forces of yet but we do have a good working model of.

The different plate boundaries give rise to different characteristics at the margins of the continents that they hold, active margins are highly geographically dynamic and occur at convergent boundaries like subduction zones and along transforms like the Alpine Fault. They're characterised by elevated terrain, regular seismic activity, volcanism, mountain building and high average erosion rates. Passive margins occur at continental edges proximate to divergent boundaries, here river mouth deposition and coastal erosion are the primary forces in landscape dynamism and the pace of change is much slower. Passive margins are characterised by gently sloped or rolling terrain, slow meandering rivers often with wide deltas, salt marsh, barrier islands and low average erosion rates.

Having more plates means the continents are smaller, there are more coasts, more active boundaries. This means more nutrient turn over due to higher overall average erosion rates, and richer oceans, more shallow water for reefs more coastal wetlands for fish nurseries, less farming land but of a higher quality where it does occur due to higher erosive nutrient input rates.

Fewer plates means larger continents, fewer coasts less, active boundaries, a lower overall nutrient turnover from erosive processes so farmland is poorer but there's more of it. The issue that could be really critical is that evidence from the late Permian suggests that if there aren't enough separate continental landmasses ocean circulation is greatly impeded and this can kill sea-life.

Elaborations of any unclear points are available on request, let me know what you want me to focus on and I'll edit accordingly.

One thing I should have made clear and I don't think I have is that only the areas of plates with continental crust are anything like stable over geological time, we call those areas cratons, oceanic crust is always being created at rifts and consumed at subduction zones. That's what creates supercontinents and drives up mountains.

This is somewhat circumstantial, because I am not an expert on plate tectonics. But I do work with quite a few people who are experts on that topic, and I have asked them in the past the question "why does Earth have the number of tectonic plates that it does?" Their answer was a very strong "we don't know."

Moreover, we don't know what parameters it depends on. People would like to know this, because it would allow us to predict whether there will be plate tectonics on exoplanets, and if so what form it will take. There are many competing theories about how plate tectonics gets started (and why it happened on Earth but not on Venus), but unfortunately it just isn't something that science has a good understanding of yet. We can understand how the Earth's plates move and why, but we can't understand how the process gets started and what it might be like on other planets. This is partly because so far we only have one example of a planet with tectonic plates.

Therefore an honest answer to your first question should probably also be "we don't know."

On the positive side, this means you're pretty much free to choose whatever number of plates you like, and it will be consistent with modern scientific knowledge :)

A few other back-story factors will impact your answer, but again, they'll be largely within your control.

As best we know, the engine behind plate tectonics is convection in the Earth's mantle. As a quick demonstration, sprinkle a dime-thick layer of wheat germ over a pot of slowly boiling water (or for more cogent illustration, slowly boiling molasses). The planetary case is affected by some very large departures from this simple case...

1) Your planet may not even have a fluid, semi-fluid, or plastic mantle. (Subsequent questions assume you've got a little something to work with.) 2) A spherical planet surface complicates the geometry of upwellings and subduction zones. 3) Planetary rotation will affect both this geometry and the distribution of heat transfer to and from the mantle. 4) Chemical composition of the mantle and heat transfer from the planetary core will affect the violence of convection within the mantle. (Compare the pots of water and molasses, and then turn up the heat under the molasses to see how more violent convection tends to result in a greater number of smaller plates.)

If you're free to ignore or freely specify the history of your solar or planetary system, none of this will have any significance. Even if cosmological history has an important impact on your story, you can easily take it into reasonable account and still have a lot of wiggle room.

Not the answer you're looking for? Browse other questions tagged planets earth-like geology or ask your own question.

7
Can a planet with no tectonic plates technically exist and be habitable?
8
Would it be possible to have a planet with no land masses larger than Australia?
4
Planet with Titanic tectonic plate
12
How small in diameter a planet can be while retaining most of Earth's properties?
5
Starting with a map of current landforms, how can I write the geographic history of my planet?
7
Given the mass and composition of a planet, can one determine what the radius should be?
11
What factors affect how many moons a planet can have?
3
Plausibility of (large) continents on a world with hundreds of tectonic plates
6
How big would the ice ball have to be to deliver all the water at once?
4
How would different factors increase the speed of tectonic plate movement