Boots of Speed - How fast can they go?

Alice is in a rush! Luckily, she recently divined the location of a pair of boots of speed ®. How far can she get in 10 hours?

Well, upon closer inspection, a slightly disappointed Alice will tell you they're more like "the long-limbed exoskeleton of speed", but here are the basics:

We got some options. Let's start with low-tech and work our way up. Also, as a baseline, we're taking Usain Bolt's records, who did the 100 m dash in 9.58s, which is about 23 mph. Obviously, most people do not come even close to this speed. Marathon runners have covered 1 marathon (26 mi and 385 yards) in 2 hours, 45 minutes, and 46-ish seconds. That's 9-ish miles per hour.

Your boots/exoskeleton of speed can be made of a some springy material which allows them to hop like a kangaroo. The nice thing about hopping is that your previous hop can contribute to the energy needed for the next hop. This makes it potentially more energy efficient compared to other forms of locomotion. A "comfortable" speed for a red kangaroo appears to be around 15 mph, with a maximum of 44 mph.

Your boots of speed could just provide better traction over rough terrain. As Lindybiege hilariously relates here, hobnails and cleats improve your grip, which in turn can improve your speed. Not exactly an exoskeleton, but you can take more direct routes and therefore move more quickly than normal.

As seen on the records, stilts do not actually help people move faster, despite the increase in stride length you can get from them. Worse still, stilts are powered by the people using them. (For instance, the 7'13" world record for running a mile? Not impressive.) No, stilts will not help you move faster unless they're powered by something.

There are some design issues with powered exoskeletons. It seems most of them are designed for either heavy lifting, or to help the disabled. Most products out there are not designed for speed. If you would, you would find they are:

I would go with a solid state battery, which stores electrical energy really well compared to many other batteries, and could be potentially recharged by solar arrays. Some simple linear actuators or hydraulics could help get some speed in those legs, but both of those are relatively slow.

I think she needs some heavily tech modified version of Bamboo Boogie Boots. 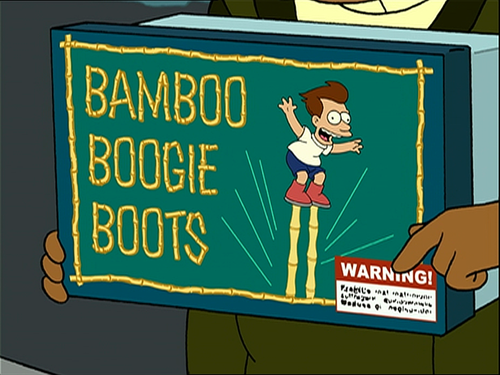 With a warning label this big, you know they gotta be fun!

The boots provide adjustable extensions. To make walking easier, the extensions should retract with each step, this reduces the moment of inertia required to take a step. Think adjustable length powerbocks. The adjustable length allows Alice to choose a comfortable walking/running pace that keeps her level while walking over uneven terrain. Users of regular passive powerbocks have been clocked running at 20mph. 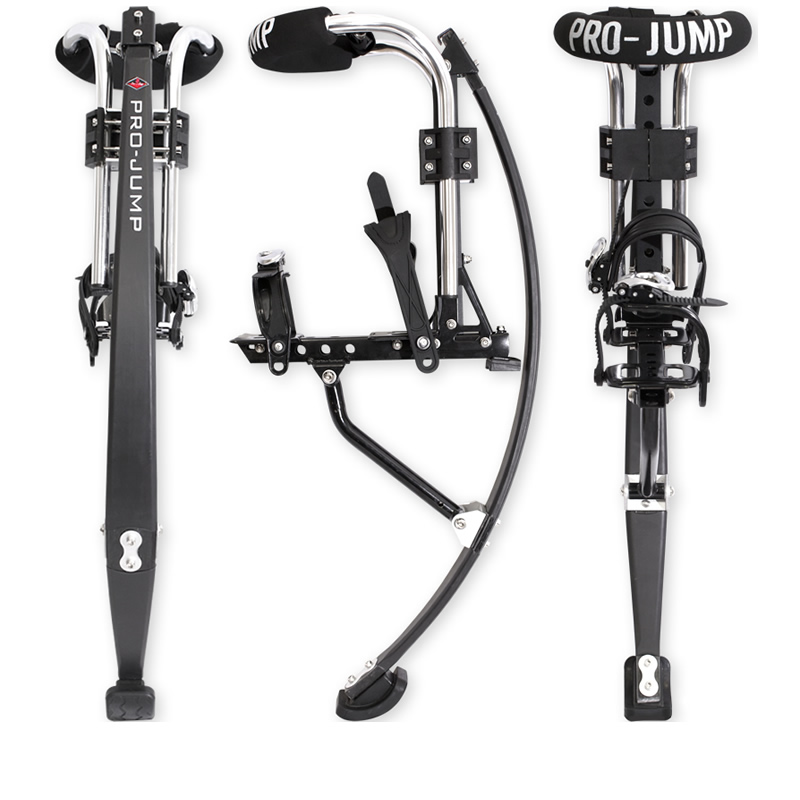 But Alice's boots are not spring powered passive affairs, they're nano-tech-fusion-fuel-cell powered. They literally eat ground with every step. The boots assist with the pushing, allowing for significantly larger steps.

Comfortably striding at 30mph will allow Alice to travel 300 miles in 10 hours. Maybe a little faster than 30mph if she has some goggles, squints really well, or likes the taste of bugs.

So I think the killer factor you're going to run into here is air resistance. Since it increases by the square of your speed, going faster didn't seem viable - it will take more and more effort on Alice's part. At first I didn't have any ideas on how to bypass it, but then I thought of divers - someone stretched out, limbs together, designed to minimize water resistance. I think we can use the same concept for your "boots" here.

So starting with the diver position as the basis, the problem becomes the landing. Rotating in air is possible but hurts air resistance. But what about having the arms and hands also be capable of handling the landing/springing?

So then our technique becomes:

An interesting side effect is that this method uses more of Alice's body - in addition to her legs, she utilizes her arms for half of her movement. This should help with endurance. I will try to dig up some math to support this later, but my WAG is this method of travel would yield speeds in the 30-50 MPH range with approximately the same effort as a light jog, depending on the user's ability and the exact properties of the suit materials. So she could go 300-500 miles in your time frame.

She could go faster for short bursts if she's willing to put in more effort and accept additional environmental/body damage, probably up to 100-150 MPH.

Not the answer you're looking for? Browse other questions tagged internal-consistency travel .

29
How to Catch a Dream Thief?
21
Effects of a human moving faster than sound
9
Effects of a warp field based super-speed power

8
How fast did the news travel at the height of the Mongol Empire?
3
Average Speed when Caving
1
Near spherical alien species - How can they move?
5
How fast could a Byzantine messenger travel circa 300AD?
1
How can a large creature be deceptively fast?
4
At what speed would my modified WW-I biplane break apart?
2
How fast might technical knowledge & culture spread in the pre-colonial Americas?