Getting energy in the oceans

We know that as a planet increases in size, its surface gets covered by oceans (more water is captured by gravity and shape is more spherical). Therefore, a planet larger than Earth can not have a large or significant landmass.

For Earth, oceans were very important for the origin of life. However, because most of the ocean seabed does not get sunlight and there are not enough nutrients in the surface of the oceans, life is not as dense in water as it is on land. This drastically reduces the ability for a larger planet to host civilization.

My question is this: What are potential realistic ways life can evolve to get energy and nutrients simultaneously (like plants) while living in an ocean? Such life must be able to proliferate enough to make dense ecosystems like forests and grasslands that gave rise to civilization.

I have read that potentially, volcanic systems could host life. But I do not believe that would be enough energy for large amounts of life especially considering that large planets have less activity afaik.

P.S: I am assuming that dense ecosystems are necessary for civilization. Is that true?

Sunlight is not a problem. You can have as much sunlight as you want your star to provide.

If nutrients settle down the bottom of the sea, there are 2 options. 1: Bring in more nutrients from elsewhere. 2: Stir them up from the bottom

1: From elsewhere. In this question I proposed a world with a constant meteor bombardment. What is a plausible way to fuel highly active volcanism and seismic activity on my planet?. Your world could have a rain of meteors which fertilizer the sea and keep the sky looking awesome at night.

2: Stir it up. You could have volcanism and eruptions at the sea floor. No doubt you are aware of the deep sea ecosystems fueled entirely by such eruptions and working without any energy input from the suns. http://wwf.panda.org/our_work/oceans/deep_sea/vents_seeps/ If you have lots of plate tectonic action you will probably have lots of volcanism. You can have a huge molten core with magnetodynamic motion fueling this.

Or you could have a massive planet sized moon orbiting close. The tidal forces exerted by this moon will flex and stretch the crust of your world - and also the waters. Tidal forces might be enough to keep the water moving and reduce settling of suspended nutrients. 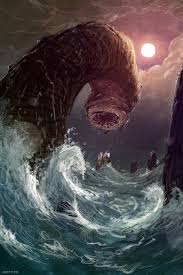 Of extra planetary origin, these colossal worms plow slowly through the sea bed, stirring up clouds of sediment in their wake much as earth worms plow and turn the dirt, moving nutrients in the process. The sea worms are chemoautotrophic and process great quantities of minerals to get the energy they need.

First to speak to your assumption about civilisation; populations need rich life supporting habitats but civilisation seems to advance better in harsher environments where societies are challenged by factors including but not limited to scarcity of food and water. When you look at where and how human techno-civilisation has advanced it's been drought, deserts and the cold of temperate climates that has pushed us forward not the lush forgiving tropics.

Now for a plant-based ecology on a world without land something surface dwelling and free-floating like Sargasso Weed would be the basic requirement, not the special tolerances of Sargassum just it's ocean going habits and the fact that it's photosynthetic that's pretty important too. You'd need some form of upwellings that bring mineral rich waters up from depth, these can be either geological, caused by heat from rifting, or thermohaline, caused by evaporation and density shifts, in nature. That gets the basic nutrient and gas cycles going from which primary consumers can start to feed and evolve. After that it's a crap shoot because evolution is not a clearly understood process.

Not the answer you're looking for? Browse other questions tagged planets evolution origin-of-life or ask your own question.

4
What is a plausible way to fuel highly active volcanism and seismic activity on my planet?

5
How would a species evolve in a world exclusively made of water?
9
How could non-photosynthetic non-chemotrophic autotrophs create usable energy?
6
Climatic consequences of two Polar Oceans and a Circumspecting Landmass
24
What effect would liquid sulfur oceans, sulfur dioxide in the atmosphere have on visibility, sound propagation and other environmental information?
16
A planet with all of its water underground
1
How would a colossal explosion affect an ocean-based planet?
6
Terraformed Venus and Mars
6
Would storms on an ocean world harm the marine life?
25
How could a planet have most of its water in the atmosphere?
12
How big can Europan fish get?