The feasibility of a robot with a chest-mounted missile launcher

I have a humanoid 6-7 foot tall combat robot that can let loose a barrage of small homing missiles via a series of missile launchers built into the chest. I do realise that it would require a great deal of internal space to store said missiles in the robot's torso and some sort of mechanism to deal with the backblast.

How would one properly design this robot to effectively use a chest-mounted missile launcher?

Missiles Were my Prior Job

I spent 4 years as an Anti Tank Gunner, I have utilized missiles extensively. Back-blast is a major issue. The way missiles manage to not have recoil is that they utilize an explosive charge to propel the missile from the launch tube which is vented out of the back of the launcher. Forget the swooshing missiles of Hollywood, when a real missile launcher is fired it sounds like a cannon going off. In fact the SMAW Rocket Launcher is so loud that one can only fire it a few times per week without risking retina detachment. The Javelin is considered a "soft launch" system and it is not safe to be standing anywhere within a 75 meter cone behind the launcher when is is fired. If you are within 30 meters of the back-blast cone you will die. The engines on shoulder fired missiles are propelling the missile at speeds approaching that of a handgun bullet. To give perspective, the TOW 2BA missile covers 4.5 kilometers of range within 27 seconds. This means it is moving at a velocity of 167 meters per second, or 547 feet per-second. All of this acceleration occurs within the first 200 meters of launch. That is a HUGE amount of power in play.

To give perspective on back-blast we were once in a building in Afghanistan when the room above us exploded and the ceiling collapsed. We thought we'd been hit by a rocket or something, turns out one of the Afghan National Police had fired an RPG from the window upstairs. Rockets cannot be fired from within a building, that explosion that partially collapsed the structure was the back-blast from the RPG, and the RPG is one of the smallest shoulder fired rocket launchers there is.

If your robot is firing missiles or rockets from its chest it will need the launch tubes to extend all the way through it's torso so that launch gasses can be vented to the rear. If your robot fires a modern rocket or missile without doing so the recoil would be about like having a hand grenade go off in its own face. It is possible, it just has to be done correctly. As long as there is a tube extending all the way through the back it will work. As far as storage, your robot has arms right? It can carry them clipped to it's chest and shoulders and reload the launcher as it moves around wreaking havoc on your 1960's comic book character heroes.

Launch the missile before firing it.

You still have to account with the exhaust gases, and particularly be sure that it does not cook other missiles or the robot own electronics. Maybe the missile tube "door" covers the other missiles, and is ejected after use because it is too hot.

It depends on what your homing missiles are homing in on: Iron Man and others seem to mostly destroy/hit real estate or swooping (=bird-speed) targets hundreds of meters away. If your target is of that ilk, the launch is no big problem, a burst of compressed air forcing the missiles out and up, where the missiles then fire their puny main drive to accelerate to/stay at the new-year's-rocket-speeds (~100m/s = 1/3 Mach) that are the still-visible-but-blurred mainstay of cinematic combat. Missile reaches their target at 100m distance after a leisurely second or two. Neither the initial launch, nor the main thruster will output reactive forces that endanger anything nearby - 100g rocket, pencil size, accelerated to 100m/s over the depth of a chest cavity (25cm): v²/2l = 2000G, or in other words, 200kg sitting (not hitting!, just sitting) on the chest of your war robot. That should be within war-robot specs. This all is dependent on the missiles not being very fast - but if the homing mechanism is good, they do not need to be, for quasi-static targets.

To intercept missiles that themselves race at 1000-5000 m/s or similar tasks, the involved accelerations need to be far more drastic, of course. Also, for far-away targets it might pay to be a bit more swift, as the traveltime of the missile may be used by the target to seek cover. Short duration-to-target also means high velocity (aerodynamic drag is dependent on velocity squared, so that is bad), which in turn begs high acceleration, which needs bigger distance to main engine firing (for safety), which needs high initial acceleration, which means explosives, lots of kickback, etc.

Most mini seeker missiles in movies are displayed at low(missile-wise) speeds, though: Running typically makes a real difference in when and how they hit, which means that their speed is not many orders of magnitude above that of a runner, so i guess as long as you play tho the cineastically mided, you are fine with a honeycomb of missile silos in the chest.

Scaling down a missile alters several key dependencies: Smaller size means lower Reynolds numbers, which is bad for aerodynamics (at same speed as big missile). Smaller size means less volume (=propellant) per unit surface (drag), meaning worse long-distance performance (a 1/10th size missile has 1/1000th of the propellant but still only 1/100th of the aspect area of the 1/1 missile, thus it will not go 1/10th of the way of the 1/1 missile, but much less.). At the same time, most engineering-relevant values for performance of structural materials go up when scaling down, so you'll get away with relativly thinner structures (this does not make up for the propellant-problem, though). Surface-to-volume also rules the interactions of any lifting/steering surfaces, so you may get better dodging and weaving as long as you handwave the performance of the neccessary servos.

Your chest fired homing missiles will probably be cool gadgets. Keep in mind that the payload of a missile is about 5-10% of the whole missile's mass, so keep your expectations of efficacy low. 5grams of ONC still can deliver about 10kJ, but while that can easily kill an unarmored human, it will just tickle armored targets. Possibly better to go for more specific goals, i.e. deliver trackers, disable optics/radar.

(1) will also be interesting for the other aspect of homing missiles: Say the missile is travelling at 100m/s down a hallway, and now has a t-junction of 2 meters width coming up. It has to go right. This means that it's forward velocity will need to be reduced to 0, while it's sideways velocity will need to go up, all in the space of 2 meters (otherwise it will hit the wall). So (just the breaking, not counting the re-acceleration) will be done with (100m/s)²/2*2m = 2500m/s² (= 250G, i.e. 250 times earths gravitational acceleration). For a 50g rocket (it already lost some of it's original 100g mass in flight) this means the application of 0.05kg*2500m/s = 125Newton force, over 2 meters, meaning 125N*2m = 250Joule energy. Rocket Fuel has about 1MJ/kg, so that would be only 1/4gram expended (+1/4 gram for re-acceleration). Good hunting!

This problem has been already faced by the most famous robot designer: 70es Japanese anime creators, in particular Go Nagai.

A side character of Mazinger, Hikaru Makiba, also known as Venusia or Aphrodite, was a robot which peculiar feature was to launch rockets from the chest. (the Wikipedia pages about it are only in italian or french, sorry)

However, keeping in mind the kink intrinsic in the japanese animation, the result may not appeal all tastes: 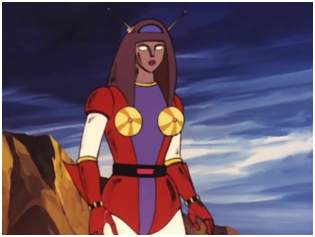 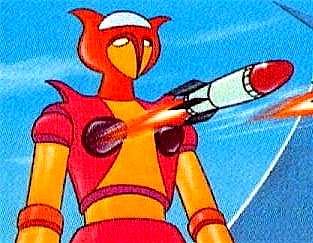 Not the answer you're looking for? Browse other questions tagged warfare weapons military robots or ask your own question.

9
Deposing the new Robot Overlord
3
With what precision & timing can we send a missile to strike the moon?
75
What is the fastest way for a robot with superhuman capabilities to make money?
18
Mounted Cavalry in the Modern Era
8
Android vs. Biped/Humanoid Robot in the Military
3
could a robot fly with powerful enough electromagnets?