Would a wheeled creature be a plausible development of evolution? [duplicate]

So, as I understand it, wheels are almost completely absent in nature, in terms of a method of mobility. Would it be possible, or reasonable for such a creature to be made along the lines of evolution? If so, how? Could such a creature achieve such size as to be big or fast enough to be a mount?

I hypothesized that an insect like creature with feet that formed a circular set of smaller legs could then use them as spokes, moving the outer rim of a wheel in a circular motion. Where they'd get the wheel is anyones guess, but it was a start, I suppose.

The problem, as I understand it, is axles. There's no way for a living creature to have an axle as part of its body - it would need blood vessels and nerves, both of which would be twisted by spinning. And if the axle is nonliving (say some kind of secretion, or keratinous growth) it wouldn't be able to form complex shapes, and would be rather brittle. To say nothing of how painful the spinning would be, with all the creature's weight on it.

Your point about finding a wheel is an interesting twist - you could imagine a creature that runs around the inside of a free wheel, like one of those hamster balls. You might even posit that the wheels are picked up, hermit-crab-like, from another species (presumably molluscoid) that happens to grow in that shape. The problem there would be coasting - if the creature stopped running, they'd be carried back along the wheel until they fell off or their weight brought it to a halt.

In theory, you could have a wheel in two sections, an inner and outer ring, linked by ratchets - it would spin freely in one direction but not the other, so you could run around the inner ring to get the outer one up to speed, then sit back and let it ratchet down. I have to imagine it wouldn't be all that efficient, mechanically, and it would be very fragile because of all the fine teeth.

There's always the hoop snake, of course, which (mythically - it's not a real beast) curls itself into a loop and rolls downhill. But one feels that's cheating somehow... and it wouldn't work, of course.

Sadly, I think in terms of pure efficiency, walking has rolling beat for animals.

If you want to have a wheel-like subsystem, you need to solve a major problem: how to isolate the rotation of the sub-system from the remaining elements.

On a car or a chariot this is achieved by bearings, but this is not feasible in living organisms, where the need of having "cabling", normally called blood circulation system and nervous system, going through every part of the body necessarily limits the degree of relative motion between adjacent parts.

This doesn't mean evolution didn't discover the wheel. We have examples of animals which use the sphere as configuration, partially also to enable quick escape. But that is used at system level (the entire body), not a sub-system (one or more limbs). 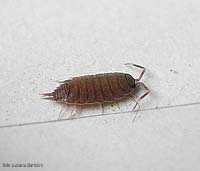 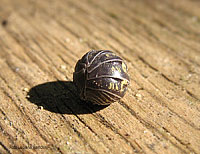 In extremely complicated theory its ofcourse possible. In practice not. Evolution happens because a genetic trait gives a teeny tiny advantage which causes more with that mutation to survive and eventually spread the mutation to everyone.

The golden wheeled spider can form a sort of Ball with his body and limbs and then roll off of sand-dunes to safety. (near the end of the video) https://youtu.be/ltvLo2vNls0

The thing is, his rolling capacity wasnt an advantage until he could well and truly roll. Any creature that has wheels for limbs needed to go through an evolutionary period where his wheels arent complete and need to offer an advantage without being able to roll. It has happened a lot that first one trait of an evolution was handy, and that this managed to develop most of another evolution that wouldnt have worked otherwise. But what evolution would favor the dangling half-wheels to form far enough to go to full wheels?

Theres also the complicated matter of getting blood and nerve-connections into the spinning wheel. Its fully possible to create something like that, but not easy and probably impossible for evolution to create. You also need a bunch of mini-limbs that push the wheel to roll, or break the wheel when the creature needs to walk.

Not the answer you're looking for? Browse other questions tagged creature-design xenobiology anatomy or ask your own question.

18
Naturally occurring wheels - do the 'mech' vs. 'tank' comparison apply to organics?
7
Species evolved to use a wheel-like object

8
Plausible reasons for evolution of humanoids with multiple pairs of eyes
4
My generation ship aliens: Plausible development?
4
Dragon development
1
Intelligence development: Plausible?
6
How would this super-earth world be? (Creature evolution)
9
What is a plausible reason why the creature keeps its victims alive in this stomach?
3
Is this Martian creature plausible?
6
Could a creature use both infrasound and ultrasound?
6
How plausible is my creature?
3
Why would this creature have a head?