This species of humanoids has a peculiar way of reproducing.

Instead of the usual physical intercourse between a male and a female, followed by the sperm cell merging with the egg cell to generate the embryo, they reproduce following something similar to what sponges, corals or some anemophile trees like pines do.

The males periodically diffuse in the air a cloud of "pollen", which then is carried by the wind until it lands on a surface. If the surface is the suitable appendix of a female, fecundation takes place.

I have the following constrains: 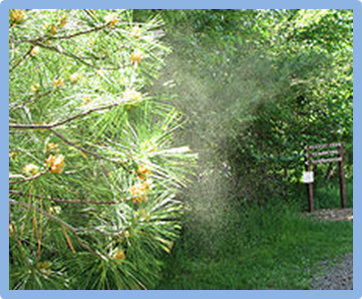 The problem I have is that I am not finding a way to reconcile this way of reproduction with physical pleasure for both sexes. In homo sapiens the nerves form before the sexual differentiation, so the basic sensitivity is already present in the areas which will become either a penis or a clitoris. But for these humanoids the female seems to have no use for sensitivity in the sexual organs. Simultaneity of the pleasure is not in scope.

What mechanism can I use to have both sexes experience physical pleasure which can be coherent with the embryo's development?

It is the gathering that confers pleasure.

There is physical pleasure associated with humans sex. Also pleasurable and sometimes the main source of pleasure is the intimacy and closeness between two conspecific beings, regardless of the acts involved, genders involved, or resulting procreation.

So too your anemophiles. They are social creatures, and the gathering in groups to emit or receive pollen is a special kind of gathering, and extra pleasurable for those involved. The difference between these creatures and humans is that the pleasurable intimacy is not between the male and female parent, but between a group of same sex individuals all involved in the emitting, or all involved in the receiving of pollen.

In humans the pleasure is from the right combination of electrical and chemical signals getting to the right parts of the brain.

In these beings it could be essentially the same thing. Males releasing their pollen might not be to different from masterbation in humans, where the pollen glands are stimulated to release pollen, and create a pleasure signal.

I think to answer your question you need to think about the development of these processes from an evolutionary perspective. What purpose does pleasure serve in your humanoids’ reproductive cycle? In humans and other mammals sexual pleasure encourages participation in elaborate courtship rituals. If we didn’t derive pleasure from sex we would behave very differently. In a species with this form of reproduction what need is there for a reward or incentive to release or receive spores? Potentially these actions could be driven by the same urges that cause us to drink or sneeze so why would evolution instead choose to make them pleasurable acts? Answering this question will in turn provide the answer for how the pleasure is achieved.

For males pleasure could drive them to release spores only when they have the best chance of fertilizing a female. This might mean they derive pleasure from strong winds carrying away their spores.

For females pleasure might reward the act of fertilization. When spores land they initiate a chemical reaction that produces pleasure.

Both sexes require stimulation of the relevant area and resulting orgasm before they can reproduce. The males 'ejaculate' a cloud of spores into the air and the female also require orgasm to fully expose their appendix.

Depending on the amount of pollen produced this might be a biologically very expensive reproduction strategy. In that case I wouldn't be surprised if the males of the species evolve a specific 'breeding season' and are incapable of being aroused otherwise.

Not the answer you're looking for? Browse other questions tagged science-based biology humanoid sex .

5
How will interspecies lovers overcome different body plans?
1
Could an intelligent alien species reproduce via pollen?

3
A rapidly reproducing, lithotrophic slime mold
7
Sexual reproduction without biological sex
7
A World without Sexual Desire
16
Bound for life humanoids
5
Preventing inter-species breeding in humanoids?
8
Would humanity go extinct if pleasure ceases?
5
What biologically would cause enforced sexual monogamy, and what could reverse it?
3
Would lack of sexual dimorphism negatively impact a brutish humanoid species