How to differentiate between demonic possession and mental illness?

It turns out that all of the deities and various demons, angels, and spirits are real. The super natural world took a hiatus since the dark ages for reasons not relevant to this question and for equally obscure reasons just all decided to come back out of the blue. So now you have divine and semi divine beings in modern society. My story takes place in a small town where police and jail staff are struggling to handle the influx of paranormal related criminal activity. One of the issues they face is that minor demonic possession presents similarly to paranoid schizophrenia.

So when they get a guy in their exorcism wing what would be some ways to determine supernatural symptoms from regular old crazy? (For minor demon possession obvious things like speaking ancient Aramaic, turning their head backwards, and crawling across the ceiling don't happen.)

Mental illness such as schizophrenia is diagnosed based on symptoms. If something is causing symptoms truly identical to schizophrenia, it's going to be very difficult to figure out that the underlying cause is different.

So something will have to be different.

One possibility is that the symptoms are different in some subtle way. For instance, the most famous symptom of schizophrenia is hallucinations. But these hallucinations are usually auditory (hearing things that aren't there), less often visual (seeing things) or tactile (feeling sensations that aren't there, like bugs crawling on your skin). They almost never manifest as smells or tastes. Perhaps demonic possession tends to include hallucinating the smell of brimstone or a bitter taste, along with its other effects.

Another possibility is that the underlying cause of demonic possession is easier to test for. Someone who's possessed might react to the touch of holy water or consecrated Host even while unconscious, which a schizophrenic wouldn't, even if they believed they were possessed or had a paranoia of Catholicism.

The key to this is that you don't need to tell the difference until later. If you can't identify which condition your patient has from symptoms alone, the easiest way to deal with it is to treat from quickest and most likely to rarest or most complex.

Since you're in a highly occult environment, basic precautions should be taken.

Then you can proceed with treatment as usual for any remaining conditions.

demons, angels, and spirits are real...

If you are having trouble with the first of these, recruit one of the second or third on the list to help. If demons can possess a person, angels should be able to also. The angels, though, are austere and haughty - sort of the equivalent of calling in the feds.

A very anime-like option is for a person possessed by a demon to act as the finder. The demon performing this role would be a sort of demon cop; there are rules demons are supposed to obey and this demon acts as an enforcer. Usually it has one particular host but when pressed can jump to a different one. The weapons and methods useful against possession work on the demon cop too. The angels do not like working with this demon cop.

Spirits are a wild card and good material for the second season of this show. They can be mistaken for demons, or even angels and for their own reasons might masquerade as one or the other but they are neither. Some are spirits of dead people. Some are the spirits of nature forces not allied with heaven or hell. One might be an unnatural Outer forces older than heaven or hell - it is one of these that might induce the angelic and demonic forces to cooperate.

If there isn't some expert who can come in (likely having the knowledge of the truth before the rest of the world) and give them the answer, it would be this; the same way a medical doctor can tell if you have one sickness over any other.

What separates possession from any other sickness? Surely someone would figure that out pretty quickly (at least as quickly as a small town building an exorcism wing in a hospital/jail).

If you were asking what sort of tests the only bit about schizophrenia that I can remember that is useful is that there is a very specific age range that it tends to happen in so if it happens to someone outside of that age range that would be a good first indicator for more tests.

In real life, doctors usually have to deal with infections in a similar way. A patient might come in with a set of symptons that will match a number of different diseases which are all common in the area where they work.

For example: in a tropical country, a patient may present headaches, fever, shivering and vomiting. A doctor will not know at first sight whether that patient has got Malaria, Flu or Dengue. Might even be something else, other than those three. So they start by treating the symptoms first, in a palliative manner. They will deal with the disease more specifically later once lab tests have been performed.

If you can't figure out demonic possession from schizophrenia, you may as well have to follow a similar route. In either case, you will want to isolate the patient and provide them a safe environment (i.e.: a padded room where they won't try to kill themselves or other people). That might give you enough time to find an occultist who can diagnose demonic possession, or a psychiatrist to find out whether it is schizophrenia.

If neither type is available in short notice and you don't have some padded rooms available... Then you will have to resort to good old fashioned frontier medicine. Apply the exorcism first, and ask questions later.

One way to exorcise ghosts and demons is to pick up a holy object, such as a bible, and transfering energy from them to the possessed person. Such transfer may be kinetical in nature, given by the formula $e = \frac{mv^2}{2}$ - that is, a one kilogram bible hitting a minion at one meter per second will impart them with half a joule of redemption. You may a few dozens of joules of applied grace for the exorcism to be effective.

If you lack holy objects, you can channel sacred light by chanting. See how Dr. McNinja uses this technique to fight a host of ghosts: 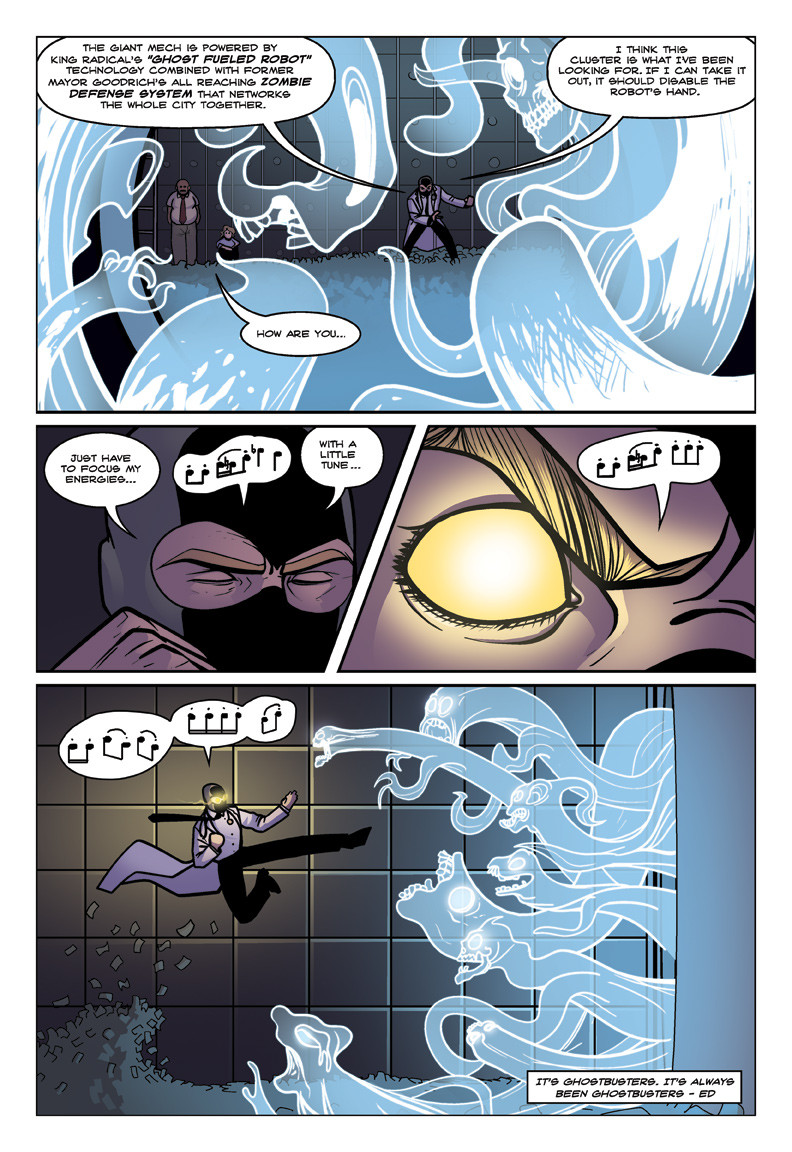 The advantage of this approach is the prognosis. If it was really a case of possession, then you have solved it. If it was not... Well, at least the patient has been pacified. It should be easier for the shrimps to handle them from that point on.

It would be possible to create an area or tools for diagnosis. A pentagram made for protection in a room would suffice. If the subject was unable to pass through the room to the other side they would be possessed by a paranormal entity. Similarly a worn pentacle could be used as a diagnostic tool. Both are supposed to provide protection from magical attacks, spirits and demons. Another approach would be a spot test with holy water.

IDK if someone already said this but aside from the good ideas above such as hallucinating the smell of brimstone (because tactile/olfactory hallucinations are so rare), using holy water or crosses or the like that only possessed ppl react to, if you'd like it to be more subtle perhaps an MRI or CatScan would show the difference for whatever reasons and you could get really sciency with it w a lot of jargon. This could pose problems for your small town dept. as they don't have such resources hand must resort to less certain methods.

Not the answer you're looking for? Browse other questions tagged magic urban-fantasy paranormal demons .

46
Would a demon be afforded civil rights?
31
Would a weaponized priesthood violate separation of church and state?
4
Realistic Demonic Possession
10
How can demonic patrons be made to value quality over quantity?
3
How can an inter-dimensional rift between worlds prevent passengers from crossing back over?
1
How could making a soul more demonically compatible lead to a reversal in demonic possession?
4
How can I make animal teeth look MUCH more demonic?