What change in history would cause the Dutch to speak German?

What single change(s) in history would cause the Dutch people to be speaking German instead of Dutch?

I understand that German and Dutch are both Germanic languages and share a common ancestry, as German has dialect continuum from the border with Poland all the way to the Netherlands.

I'm looking for a change that would prevent the drastic, but gradual diversion that happened between the two, so that someone from Berlin could understand a Dutchman just as well as he would someone from Munster or Austria.

I do know that people from different parts of Germany and Austria can have difficulties understanding each other, but overall it's still the same language.

As the famous quip goes, a language is a dialect with an army and a navy. 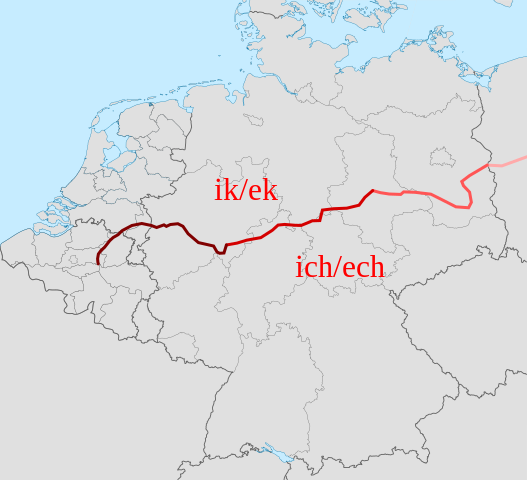 The Uerdingen line (the Ik/Ich isogloss), one of the isoglosses separating Low German (to the north and west) and High German (to the east and south). Map by Slomox, available on Wikimedia under the CC BY-SA 3.0 Unported license.

Low German and High German differ principally in that High German dialects participated to the second Germanic consonant shift, which is the reason why in Modern German "ship" is "Schiff", "apple" is "Apfel", "out" is "aus", "two" is "Zwei", "wife" is "Weib" and "day" is "Tag". (The corresponding Dutch words, as a Low German standardized dialect, are much more similar to the English words: "schip", "appel", "uit", "twee", "wijf" and "dag".)

Berlin is firmly in Low German territory: so how come that today Berliners speak a High German variety and can no longer understand their Dutch Low German close relatives?

The answer is complicated, like most answers having to do with European history. The basic reasons are:

A simple small change in history

While I cannot imagine a "simple" change which would have resulted in only one standardized form of continental west Germanic, I can easily imagine a relatively simple change which would have preserved the Low Germanicity of Saxony and Brandenburg and Prussia and Pomerania: Gustavus Adolphus does not die in the battle of Lützen; instead, he continues to lead the northern Protestant side in the Thirty Years' War and establishes the Corpus Evangelicorum as a polity separate from the mostly Catholic Empire. A political boundary between the northern and western Low Germanic dialects and the southern and eastern High Germanic dialects would have preserved the linguistic separation, which would have, in time, resulted in two standard languages.

And who knows? Maybe the Dutch would have adopted the Low German standard of their Deutsch neighbors...

Well. I have little knowledge on the history of the Netherlands, but judging according to this Wikipedia page:

I think that the changes have to go back to the early middle ages: Maybe the Frisians (who were Saxons, theoretically related to both Anglo-Saxons and the inhabitants of the German region Sachsen) win the Battle of Boarn.

If they continue to repulse the West Franks but are instead only defeated by Otto I, who for some reason happens to be less occupied with Italy and puts the focus of the Holy Roman Empire more to the North, keeping local nobles more under control and the ties to other German peoples stronger...

It can become complicated in the ethnic chaos of the migration period (the Franks were for example were no single germanic tribe, but rather a confederation of tribes) or in the feudal anarchy of the later times, but I think it's doable with so much explanation. Of course if this is a major plot device, then you are going to need much more research.

Just to be clear, the current differences between Dutch and German is far bigger than outsiders would think at first sight. Their vocabulary shares many similarities, but a Dutch person cannot go to Berlin and instantly switch to German - Dutch high schoolers study German as part of its middle school curriculum, but even then they'll need to go to university or immerse themselves in the German culture before being considered fluent. You cannot literally translate a Dutch sentence into a German one without sounding like a fool. It will sound like the German version of Dunglish.

It's hard to pinpoint a definite change that will make the Dutch speak German since the concept of a politically unified Germany is 'relatively' recent. I'd go back far in time for that. Another problem is Belgium (the northern, Dutch-speaking part) which I presume you'll also want to speak German. Historically speaking, the Low Countries were one entity until 1648, at which point the Spanish gained possession of what would later become Belgium. That'll require some butterflying.

Just make the Netherlands be part of Germany, and they can keep speaking the exact same language, but it will be called a dialect of German. It’s no more different from “standard” German than the Scots dialect is from standard English, and if Scotland was an independent country then Scots would be a language rather than a dialect.

As you correctly point out, even among Germans there are quite some variation is the pronunciation, and Hochdeutsch is about as "fictional" language for Germans as much as ABN is for Dutch: they learn it at school, but there is nobody talking it as family learned language.

I have personally heard some Dutchies (rather non conformist ones, I'd say) admitting that Dutch is nothing more than a German dialect.

The only way to prevent the divergence between the two modern languages would be to force the common living between the populations and preventing the foreign influxes that moved Dutch away from German. So, to cut it short, have German kingdoms expanding in the low lands until the North sea.

Supposed that Ferdinand I and his successors divide their time more or less evenly between their wealthy and powerful possessions in the Netherlands and in Austria/Bohemia/Hungary. Then it will be possible that the elites in both regions will start to speak an new dialect that combines features of both regional dialects. And by the time that universal schooling starts, the idea may be that the new dialect is the only proper one and that only country bumpkins would speak regional dialects and thus only the new dialect should be taught in schools. Thus the new dialect becomes the universal versions of German.

This has the added advantage that it may be a much more peaceful history than ours. Perhaps millions of people will be killed in European wars from 1500-2000, but that might still total over a hundred million fewer lives lost than in our history.

Martin Luther’s translation of the bible could have been a pivotal point in history. To address a larger audience, he intentionally picked a south German dialect as opposed to his own, which would have been understandable by his contemporary Dutch. Northern Germans have, to read the Luther Bible, effectively given up their own dialect, while the Dutch have had their own translation. Luther’s attempt was a failure, since the addressed south Germans remained mostly catholic after the 30 year war. If he stuck to his own dialect, maybe the Netherlands would today border on Bavaria and Austria or would have never left the Holy Roman Empire.

Not the answer you're looking for? Browse other questions tagged society alternate-history language medieval-europe .

31
What event would cause a huge, dominant nation to adopt the language of a smaller, inferior one?

5
Language problems for time travelers
47
Is this alternate history plausible? (Hard Sci-Fi, Realistic History)
5
What single change in history would allow to make the German city of Munich be in modern France?
20
What could cause a culture to change their writing style?
8
The language of Duckburg: Calisota German
2
What events caused the formation of the 18th century Dutch-Scandinavian Republic?
6
What change in China's history after the Korean War is needed to made the Democratic movement in 1989 a success?