How long would it take to discover a large Island appearing in the ocean?

(This is part of a game I'm making, with a bit of backstory here.)

Size/Shape: Roughly oblong and quite large. Length of 15 miles, and a greatest width of 8 miles.

Environmental effect: Due to handwavium reasons, the appearance wouldn't significantly effect the surrounding environment. It can be seen, landed on, all that. However, it won't effect sea levels or anything. It will be sensed by all modern technology and biological functions (of humans AND animals).

Land: It will be covered in a temperate rainforest, in case that helps anything.

Method of appearance: A thick fog rolls out of the ocean, and over the course of 6 hours, the topmost edges of it seem to solidify into a real island. From below it looks like fog that you can't see through. From the top, like any other island.

So, how and when would an island this size, in that position be discovered?

Days, if not hours

200 nautical miles is the exclusive maritime territory, which translates to about 370 km. Any Navy ship patrolling that region will spot it at the edge of its range and investigate.
EDIT: I would expect a routine patrol would pick up a large unidentified object at extreme range and call it in. Wouldn't do to let an invading armada pass by, just because they had to go out of their normal patrol route. HQ will probably inform any satellites passing by to take a closer look. If satellites aren't available within a few hours, they'd send a couple of jets to fly by at high speed. "Island? What do you mean, just an island? There's no island there!"

At first I was agreeing with nzaman (who just got my upvote) but then I hesitated because of the explanation and decided to write my own answer.

It could take a very long time

Sandy Island is a phantom island that was added to maps in 1876. There are also mentions of a "Sandy I." as early as 1774, but it's unclear if it was the same island. It was about 1,000 km north-east of Brisbane.

Now, we do have lots of satellite imagery being taken every day, mostly weather and environmental stuff, but also mapping. However, unless somebody is actually continuously running image comparisons on all of them, they are useless for finding new islands. Especially one that's 300 km2.

I would guess that there are some very smart image comparison algorithms out there running on very localized, high-value targets around the world, but terrorism and fuel enrichment plants are rare in the south-eastern parts of the Indian Ocean.

This is a screenshot from MarineTraffic right now where I added an orange dot 500 miles south of Perth: 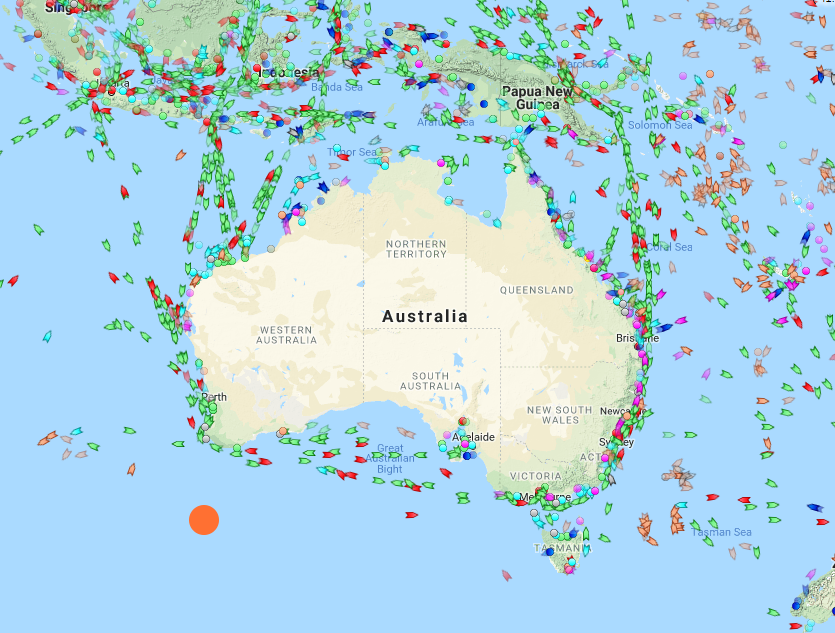 The shipping traffic in the area seems negligible. Since you seem to have explicitly disallowed ways other than visual to spot the island (such as seismic events), unless you put the island smack in the middle of a busy lane and have ships bump into it, you could stay undetected for a long time.

How: most likely by commercial shipping traffic departing from South Africa or Fremantle to New Zealand or South America.

When: probably within three weeks to a couple of months. This section of ocean is very lightly trafficked and patrolled.

Three business days. That would be the most likely time, 50% chance it's sooner and 50% later. Takes two days to get the first images, one business day to process the discovery.

This amounts to 120,000 km^2 or 1/3,000 of the surface scanned per minute, or 1/50 per hour. There is a lot of overlap between scan areas, hence the 50% qualifier in the beginning of the answer - can be sooner, can be later. Still, in four days, it's all but impossible for the island to stay undiscovered.

While earlier discovery by shipping or aircraft is possible, it's highly likely to go unreported due to simple assumption one is mistaken and the "someone else's business" effect.

Not the answer you're looking for? Browse other questions tagged technology modern-age .

4
How much metal could a humanoid safely have in its skin and bones and be functional?