Determining climate and biomes in a non-planetary setting

I'm currently playing with a geographical setting that's flat rather than round and thus doesn't follow a lot of the same rules as one modeled as a planet. I've found resources concerning climate in Earth-like or planetary environments, such as: Creating a realistic world map - Currents, Precipitation and Climate.

However, these mostly refer to features that don't exist in my world, like latitudinal bands or pressure systems resulting from the rotation of the planet (eg. Coriolis effect). I'm trying to come up with a reasonably grounded scientific approach to determine climate around some constant features. I'm also open to adding elements and systems that would add complexity or influence it in an interesting way.

Here is some additional information and a map for reference:

Height map of the northern region - 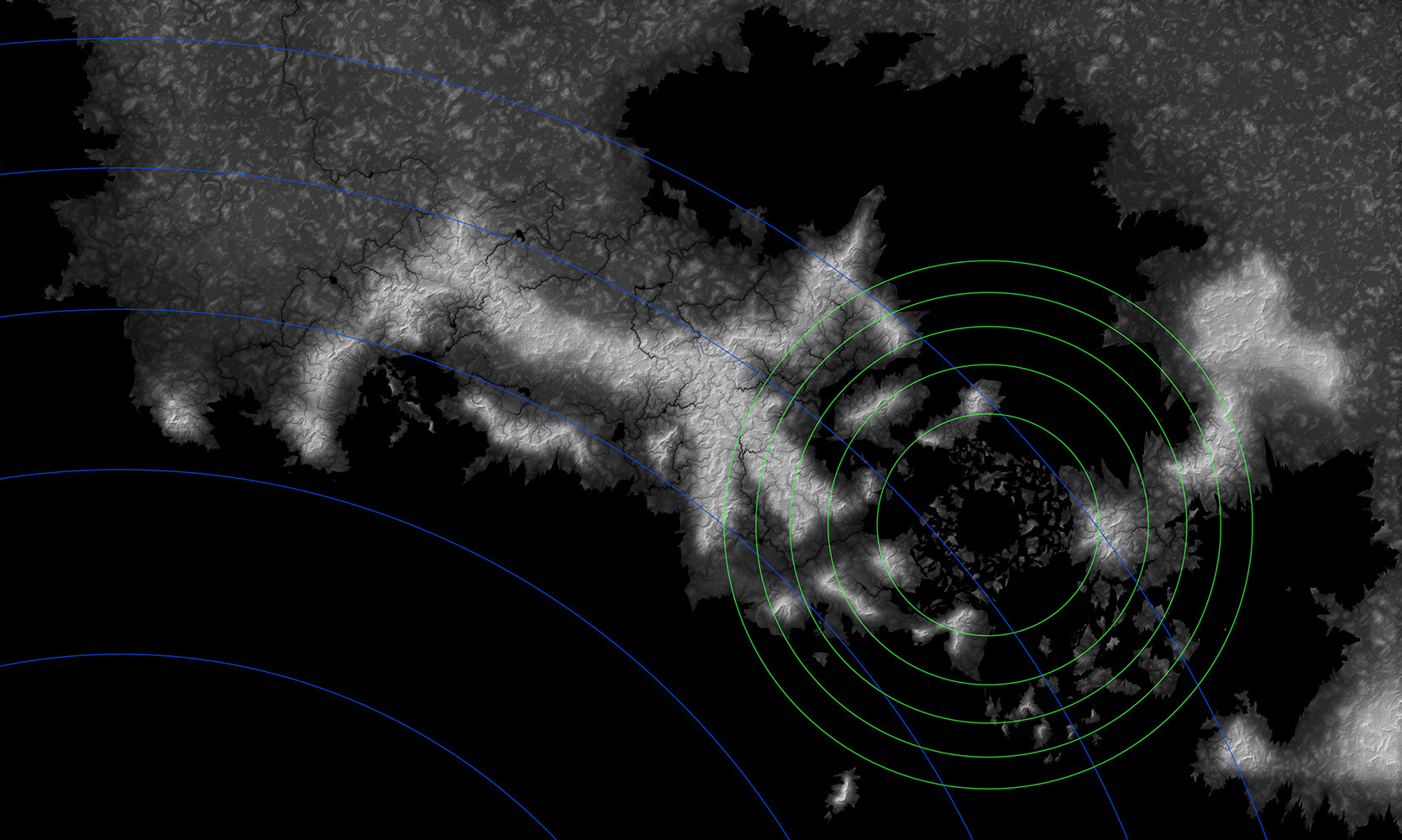 Full world map, although most is WIP and doesn't have as much detail; may refer to it for a better sense of the general geography - 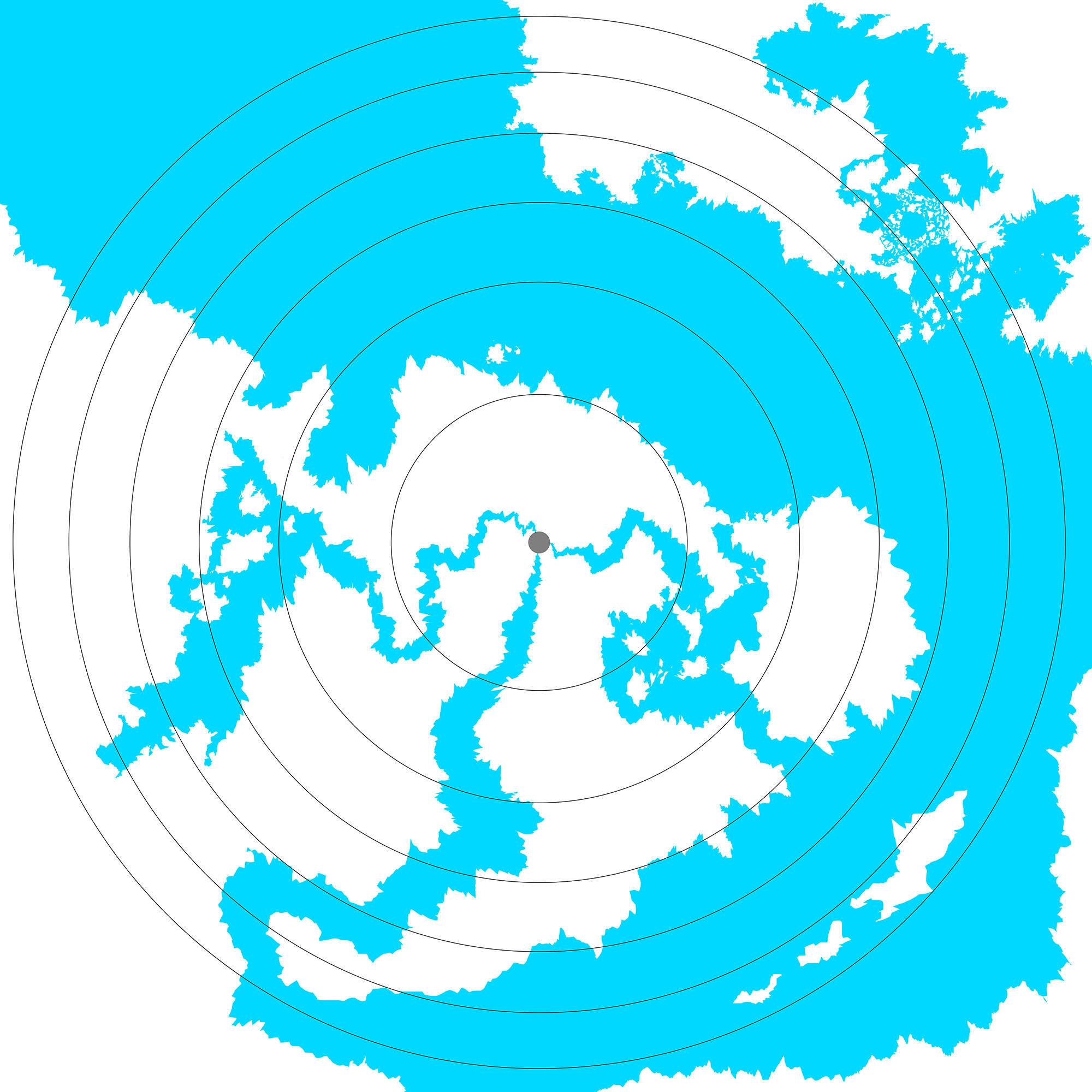 This is all the relevant information I can think of now but will add more if it occurs to me.

Given these conditions, what are considerations that could guide the creation of a scientifically-based climate/biome distribution in the region?

Edit: Posted my own answer with information from my own research and understanding to supplement the helpful posts by others.

Answers with more details as to practical application of the concepts to a map would be very welcome.

As with any climate system, start with the energy sources and sinks. On earth, that’s the equator and the poles, respectively, and on your planet, that’s near the lights and distant from the lights, respectively.

Areas near the lights will be warm, and thus air found nearby will be less dense and will rise to be displaced by cooler air flowing in. This will stabilize into a toroidal circulation cell centered around the lights. As you point out, from the surface this would feel like a radial flow towards the light source. The velocity would depend on a lot of factors, including temperature, uninterrupted distance, and turbidity measurements.

Assuming the atmosphere is also earthlike, as the air moves towards the lights and warms, it’ll also pick up water and becom moister. This water will then precipitate out into clouds and rain as it rises, making the areas near your lights cloudy, wet, and warm - a perfect rainforest setting. Moving away radially, you’d likely have wet temperate rainforest, drier forests, savannah/grasslands, tundra, and then icy desert in all the areas most distant from either light source. The light source in the south looks much larger than the one centered in this map- it’s possible you’d actually end up with a scorched area nearby if it’s of sufficient temperature, but I’d need to know more about the land/ocean nearby to give a decent estimate.

You may get some cool interactions between the two lamps- it’s likely a jet stream will form as the two toroids (toruses?) collide and have descending branches in approximately the same area.

More locally, you’d still have sea breezes and Mediterranean climates on the coasts because the sea breezes are powered by the day-night cycle and the differential heat capacity of the ocean relative to land.

I like the idea of a drainage point in the ocean. It’s a fun way to play with the non-planetary dynamics and it adds a lot of character to your world. Depending on the flow through this drainage point, the ocean might still be dominated by oceanic circulation and overturning based on temperature and salinity gradients. There might even be some mix of net flow and overturning circulation, which could create some cool helicoidal effects.

The idea of a freshwater ocean is an interesting one. The ocean is currently salty because it’s the result of millennia of weathering salt-containing rocks that are washed into the ocean and not removed. To make a freshwater ocean, you could either have minimal uplift and thus minimal erosion but would lose a lot of the topography, or you could have some sequestering agent. You’ve already got a drainage point in the ocean- that’s a great start. As long as the input into the system is also freshwater, you’ll probably be fine. Otherwise, I’d look into salt-based biological shells (like diatoms or coccolithophores, but that build their shells out of salt instead of silica/carbonate) as an easy way to sequester any salt present in the water and keep it fresh.

I think we can say a few things about it beyond what @Dubukay said in his good answer.

First, there would be "seasons", but they'd be arrayed in space rather than in time. The warmer areas would be summer all the time, and further away from the brightest area it would be cooler and then you'd get to an area where it frosted each night, then to where it froze at night and finally to perpetual winter.

Any area where it didn't frost at night would be tropical, which might well produce some interesting adaptations. Perhaps even more interesting would be the areas which freeze at night, but never undergo a true winter. I suspect you'd get an interesting new kind of plant with some sort of anti-freeze system!

One other, subtle, effect you'd see: The leaves on plants are governed by two things: The competition between plants for light, and the necessity that a leaf get some light at least some of the time. With a source that continually moves, leaves grow semi-randomly, even on a single plant. But on your world the position of the lights would be fixed and plants could now evolve to optimize the placement of their leaves. You'd doubtless see leaves all rowing in the same orientation facing one or the other light or facing some average of the two. (It's hard to tell in advance what would yield the best results.) You plants would look really, really strange to Earth-eyes!

Here's my answer based on the research I've done and my own rudimentary understanding of the subject.

To begin with, I'll refer to Geoff's Climate Cookbook, which lists the following as the basic physical principles from which 'virtually everything important about climates can be deduced.'

From this, we can surmise that given a uniform surface (eg. all water), the wind will blow from the cold outer regions (high pressure) inwards toward the light source (low pressure). If I'm not mistaken, the temperature gradient would be steeper the further away you get from the light source due to the inverse-square law, so the winds would be stronger. These would be the prevailing winds somewhat equivalent to the ITCZ/STHZ/PFs on a planetary body.

Land masses should affect the pressure distribution in the same way as on Earth according to principles 2, 3 and 4. Most guides usually refer to the pressure belts on Earth at this point, so what I have to say on this topic is my personal conjecture. Feel free to correct me if I'm mistaken.

In the winter, land on Earth creates high pressure areas on the land and low pressure areas over the surrounding ocean, with the opposite being true in summer. Since there are no seasons in this setting, the land should constantly create either low or high pressure zones, presumably depending on the climate in that region and therefore how far it is from the light source. Central regions would create pressure distributions equivalent to Summer on Earth, whilst outer regions would be more similar to Winter. The larger the land mass, the more intense the effect. I don't think the East/West distinction applies in the absence of Earth's pressure belts.

Sea breezes should still occur owing to the day-night cycle, but my understanding is that these would be stronger in the warmer inner regions where the temperature gradient would be higher. In the colder regions further from the light source, they would be less pronounced or non-existent if they oppose the prevailing winds that flow inwards to the centre. Might also be worth considering mountain/valley breezes, but most sources I've consulted never mention it so I'm not sure it's significant on a macro scale.

Warm winds blowing over the oceans will pick up moisture. It will then rain over land as a result of convection causing the air to rise, or orographic lifting if it encounters a mountain range. Mountains should still experience rain on the windward side and rain shadow on the leeward side.

It should rain more towards the warm centres, assuming the winds have had a chance to pick up moisture. If it's wind from a dry inland region, there should be little rain. The mountain ranges in the map provided should make the southern coast dry (a problem for me because I drew the map without thinking about it and plotted the rivers assuming it would be the opposite). The distance inland from the ocean should also be considered; the longer it has to travel over land, the more moisture it will lose on the way.

Cold winds blowing over the ocean in outer regions will pick up less moisture than warm regions.

The circles on the map represent intensity of sunlight, with the outermost circle being 0 deg Celsius, local conditions notwithstanding. Winds blowing hot or cold air from other regions will affect this, as will large bodies of water that regulate temperature fluctuations from day/night. I imagine precipitation would have a cooling effect as well. Last factor I can think of would be altitude, with temperatures decreasing the higher above sea level the land gets.

Geoff's Cookbook includes a table based on the The Köppen–Geiger climate classification that might be useful as a reference: 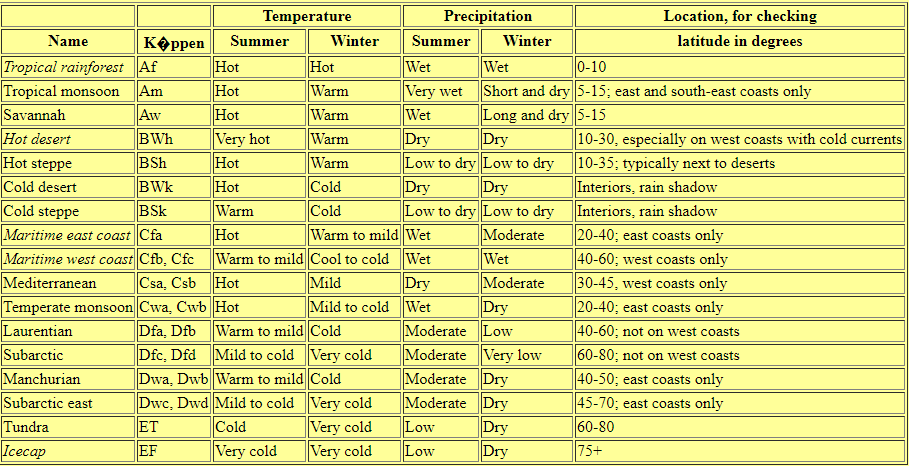 Biome should depend mostly on the temperature and precipitation; the latitude in this setting is irrelevant. As there is no seasonal variation, it's impossible to have exact matches for everything in the Köppen system, but the ones where Summer/Winter remain relatively similar should be most instructive.

Higher altitude usually leads to lower temperatures that will affect biomes. Areas of higher rainfall are more likely to have forests as opposed to grasslands/steppes.

Not the answer you're looking for? Browse other questions tagged science-based environment geography weather or ask your own question.

3
What would be the major weather patterns on this map?
20
How to create the eternal storm?
3
How realistic is the placement of the cities and borders on my map?
9
How realistic is the geography of my map?
6
Can a planet have warm or temperate climates within its polar regions?
3
How can I explain the geography and climate of my planet?
2
What effects would a higher gravity have on my world's geography and climate?
10
Weather with extreme seasons