Would this biological cooling system work?

I'm working on a class of tetrapods similar to mammals with warm blood. I am planning for their metabolisms to be quite high on average, among the carnivores especially. They range in size from two grams to twenty tonnes.

In reality, birds are some of the warmest animals with body temperatures around 40.5 degrees Celsius, or 105 degrees Fahrenheit. Ideally, I planned for them to at least have a body temperature around that of birds. Similarly to birds, they use a large amount of energy to maintain fast reaction times and movement, as those traits are what gave them an ecological advantage. They also have four airsacs in their unidirectional respiratory system.

They cannot sweat. They have never evolved the ability to sweat because of humid and tropical environments.

Due to the risk of their proteins denaturing, I have come up with some sort of biological cooling system to prevent them from overheating. If you have any different ideas from this, I would love to know. Next is mostly a long explanation of my idea.(TL;DR at the end)

After inhalation, the posterior airsacs will be filled with air first, then push air into the small lungs. After deoxygenation, the air will enter the smaller anterior airsacs. There is a system of air vessels throughout the body, mostly present in the abdomen, head, and larger parts of limbs. These are connected to the anterior airsacs. The anterior airsacs are bidirectional, as they push air both out of and into the vessels, or out during exhalation. A one way valve prevents waste air from traveling back into the lungs. The air brought into the body passes by a membrane that allows acetone from an acetone filled vessel to evaporate. I chose acetone because it is volatile and biologically attainable. The then acetone vapor filled air will be exhaled or recirculated for more evaporation. When not in need of cooling, the opening between the anterior airsacs and the body can close.

I made a diagram to better represent the original idea. There is a color key for many of the lines on it, and it is of course simplified. The arrows with a gradient represent evaporation of acetone. 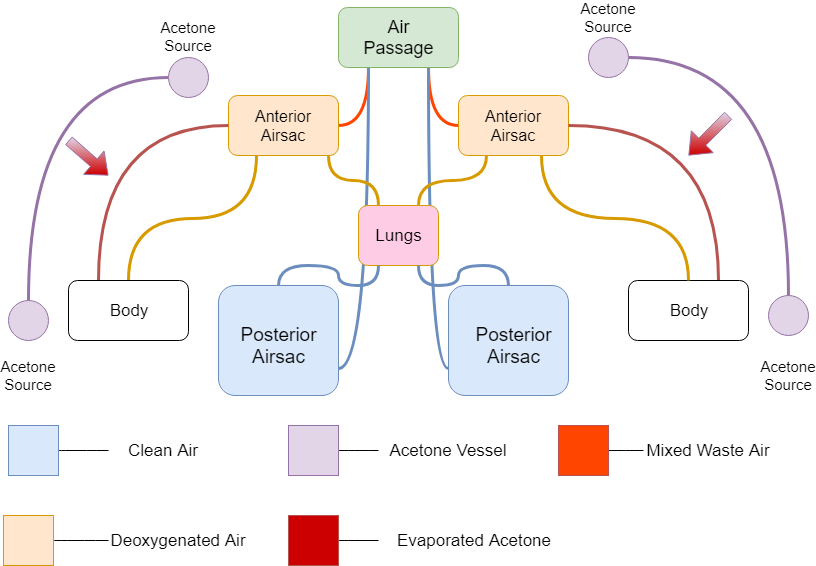 A step by step breakdown:

TL;DR: I'm using acetone to cool a creature by evaporating it into exhaled air.

If there are any suggestions on what I should do to improve it or make it more realistic, they would be appreciated. Even if this would never work, please let me know why. I probably over thought it, but thanks for looking at it.

You can use this system without the acetone and it will work just fine. The acetone really offers no benefit.

The avian breathing system is identical to your system minus the acetone, and it works just fine for a size range from sauropods (35 tons+) to hummingbirds (1.5 grams), none of which can sweat, sweating is a mammal thing.

the acetone is an unnecessary addition, which will require calories and thus the production of heat to produce. Water can be easily replaced from the environment whereas acetone cannot meaning if your creatures are overheating and short on acetone they have to heat themselves up even further making acetone, which is extremely counterproductive. 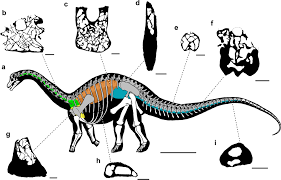 I am so digging this because of the hard biology and also the use of acetone!

As I understand it, you start with the bird air system of air sacs, and have added "air vessels throughout the body" and acetone.

Here is the bird system of air sacs for reference. http://slideplayer.com/slide/6985021/ 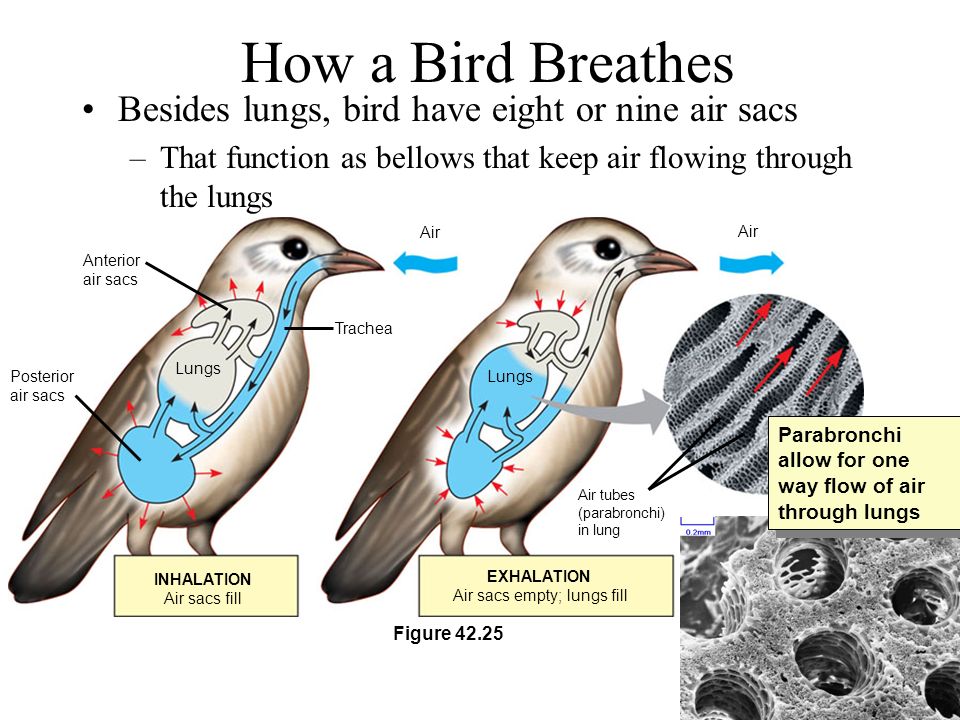 I am a big fan of acetone and like the idea of using it for cooling. Water is also good for cooling and also contributes to evaporative cooling through respiration - this is how panting works. Acetone would be better than water for cooling as it is more volatile but also more energetically costly - you need to make acetone from food but water you can drink or make metabolically. When you exhale the acetone you are throwing away calories to get cool.

I am not sure how the air vessels help. Water (blood) has a much higher thermal mass than air and so is better suited to transport heat through the body. Probably best to have heat travel with the blood, have the acetone organ in the forward (waste air) air sacs, drop the pressure in the waste air sac on preparing for exhalation to facilitate acetone evaporation and then vent / exhale the acetone vapor and waste air.

Last thing about acetone: unless these things had tissue capabilities we do not, they would sweat acetone. The body is one big lake to acetone - it moves easily across all tissue barriers and equilibrates in the tissue. Acetone would traverse the skin and evaporate off. In people with high acetone levels you can smell it on the breath and on the skin both.

Seems possible at least, though a tough way to stay cool.

Compare to human cooling via sweat.

Thus water is over 4 times as effective as acetone on the basis of cooling per gram of fluid.

An active human sweats about 1 liter / hour, so 80 kg bird would have to use 4 liters/hr of acetone for cooling when active. Remember that we can just drink water to replenish coolant, but your birds would have to generate their acetone, an additional resource drain.

Seems like a large amount of effort to spend on cooling, but perhaps not an impossible biologic burden (better than burning up). It would help if food sources were abundant to make the energy requirements easier to manage. Flying is also more expensive that typical human excessive, so the actual cooling requirements are actually somewhat worse.

The smaller the bird, the worse the numbers get though. I suspect birds in the 2 gram range are impossible. The smallest bird on Earth is about 1.6 grams, which is thought to be near the lower limit of viable designs. Throw in a noticeably more expensive cooling system and I doubt the design is viable. Without a bit of dodgy math, I could not expect to come up with a better lower estimate.

Using an internal cooler instead of sweating acetone seems like a bad design, thermodynamics and scalability are working against internal cooling.

Sorry, meant to add that 20 tons is one huge bird, the largest bird ever was supposed to be less than 0.1 tons, so this seems like a stretch too -- easier to believe if surface gravity was lower than Earth.

As many people have mentioned,the activity required to create acetone in the body will likely counteract any benefits from using it for cooling.

Taking out the acetone step, you have essentially replicated an air cooling system for your creature. Since the various air sacks are part of the respiratory system, they should be full of alveoli, in order to have sufficient surface area for oxygen exchange through the capillaries. This is similar to why radiators in cars have fins, to increase the surface area for heat exchange. 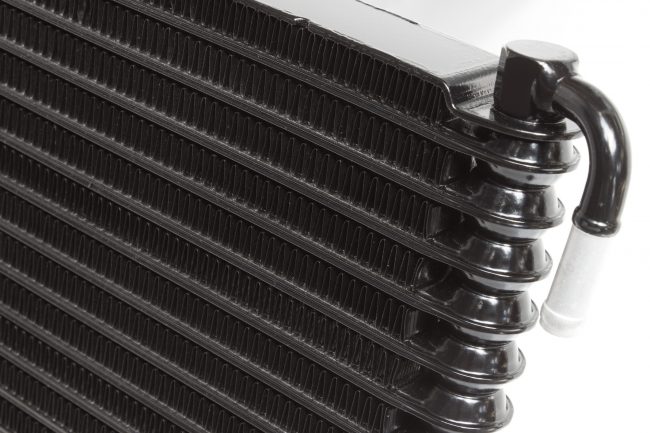 So the huge amount of surface area and the flow of blood through the alveoli essentially replicates a radiator, and the creature can essentially regulate the heat exchange through control of breathing, and via automatic processes that regulate the flow of blood thought the lungs and air sacks depending on temperature and need (for example, the creature might start reducing blood flow through secondary air sacks as the exterior temperature cools and there is less need for the body to shed waste heat, while in active pursuit of prey, all the air vents or nostril equivalents are wide open, the body if rapidly pumping air through the system and the flow of blood is maximized). Piston engined aircraft had a series of vents and controls to modulate the flow of air over the radiators for the same effect 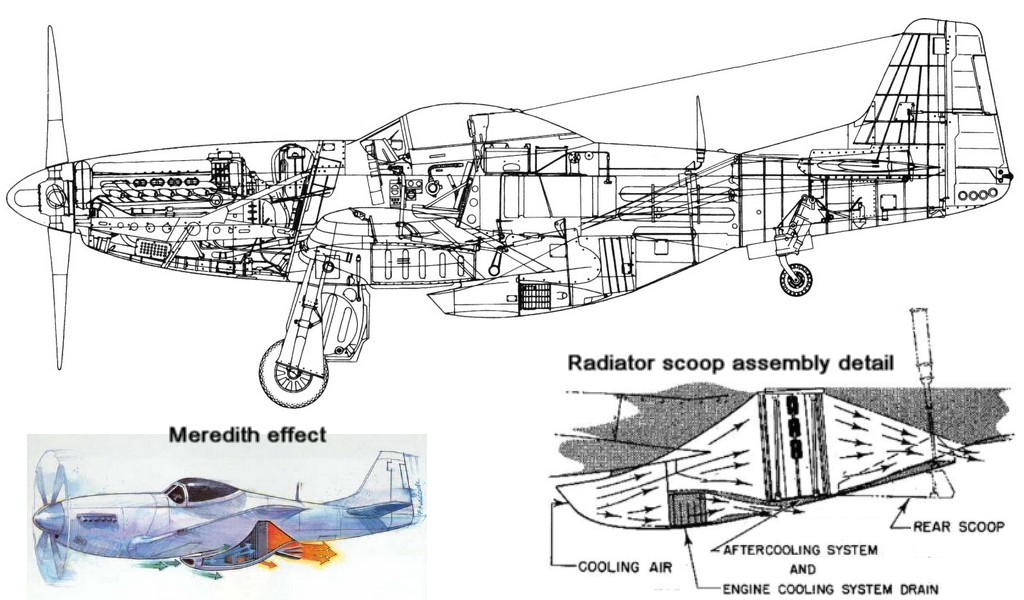 Cooling system on a P-51 Mustang fighter, with details on the venting system

So all the creature really needs to evolve is an efficient system to regulate air and blood flow through the lungs and airlocks in response to temperature changes.

16
Is a four armed arboreal reptile as described viable?

11
Could a deep ocean creature use some kind of bacteria in its body as a way to generate oxygen?
1
Alternative origins for the lungs
5
Weaponising Implosion instead of Explosion
8
Are these atmosphere compositions for habitation in space plausible/do they cause problems I don´t see?
9
Would this system work to purify water?
7
Are Air-Breathing Merfolk Viable?
8
Improved lungs?
1
What needs to be changed in the structure of human lungs to be able to filter the inhaled air from heavy particles and toxic gases?