Speaking of which, here is the cycle which starts at 14 years old and continues to death:

There is 1 year of cycles before menstruation happens. At this point in time, LH and FSH are the only hormones secreted. These both spike around ovulation. Breast development hasn't occurred yet, nor has estrogen or progesterone spiked up. This is simply pre-menstrual ovulation. But without the spike in female hormones or breast development, the eggs simply die after ovulation so even if a 14 year old female has sex when she ovulates, she can't get pregnant.

These amenorrheic cycles let the female know the signs of ovulation before she gets her period. 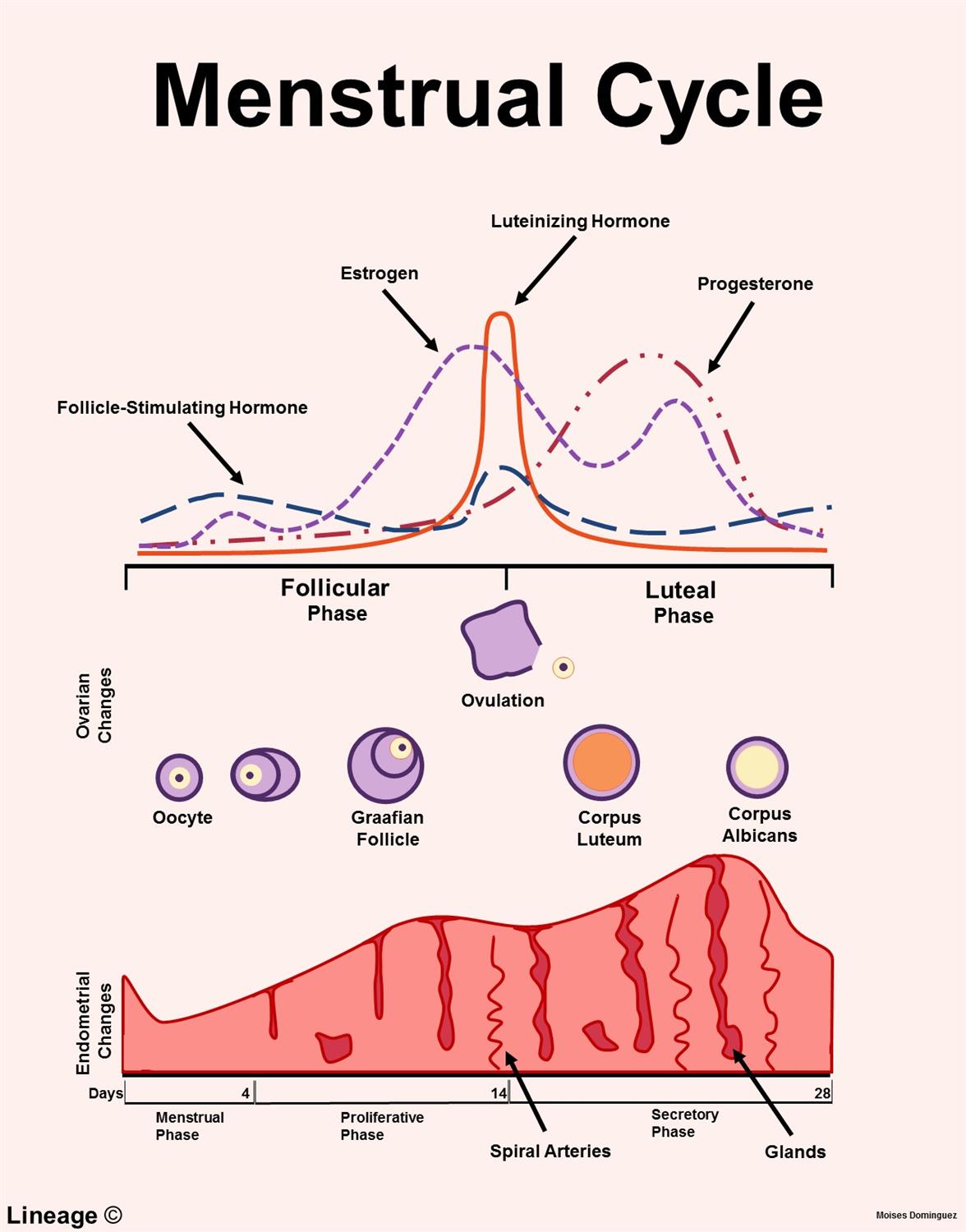 Hormones spike up and a few days later breasts start developing. A few days after that the menstrual cycle starts at the point where an egg cell is forming. The primary Oocyte, just a few hours after the oogonium goes through mitosis passes through tubes. Follicular cells are shed in these tubes and adhere to the primary Oocyte. So yes, the follicle starts forming in between ovaries.

There is no meiotic arrest. 2 days later the follicle is fully formed and meiosis starts. Over the next 3 days, meiosis is completed. After the last cytokinesis, ovulation occurs. The egg, regardless of whether it is fertilized or unfertilized, goes to the uterus and after 4 days, lodges itself in the endometrium. 18 days go by with nothing happening. Then the period starts and lasts 9 days on average. Over the 9 days after the period ends, the oogonium develops more before it goes through mitosis and the cycle starts again.

In the case that a Keplerian becomes pregnant, she could have no menstrual cycle at all for months or even years but once again, it starts at mitosis.

These typically go hand in hand in adults. In adolescents, this isn't always the case. Anovulatory periods(menstruation without having ovulated in that cycle) do happen and likewise amenorrheic ovulation also happens, especially near the beginning of adolescence. 25 years old is when having several of these anovulatory periods in a row becomes abnormal. Having more than 25% of the cycles within a year be anovulatory periods is also considered abnormal, regardless of how many normal cycles, missed cycles, or amenorrheic ovulations are in between these unusual cycles. From 26 years onwards, having even just 1 anovulatory period is abnormal and usually means something along the lines of an ovarian infection or other ovarian issues preventing ovulation. The only exception to this is up to several years after giving birth or several months after miscarriage when irregularity is expected.

So, is it plausible for ovulation to be so strongly correlated with menstruation that not ovulating typically means not menstruating? What would prevent this from being plausible?

This is actually more common than the human system, humans are one of the few organisms with a "hidden" ovulation cycle that is an ovulation and "menstrual" cycle that are not completely correlated. It is believed this is to make it harder for human men to tell when a female is ovulating thus making them stick around. basically it is an adaptation to encourage pair bonding.

You may want to look up estrus in animals.

Not the answer you're looking for? Browse other questions tagged creature-design xenobiology humanoid or ask your own question.

7
Is this reptilian race realistic?
4
How could the alien hybrids from the “Species” movies be approximated under real physics?
5
Oogenesis similar to spermatogenesis
3
Childhood versions of sex hormones, Plausible?
13
What would be the psychological differences between a human and an intelligent detrivore?
4
Keplerian Life Cycle: Old age
4
Bleeding as the bodily equivalent of a positive pregnancy test, Plausible?
4
How can a creature evolve to have two separate food cycles?