So, in my story the United States Army created a large amount of new weaponry and armor to protect its troops while they marched into the resource rich countries of South America. They invented powered armor, warrior robots, and energy powered weapons. The most devastating weapon of theirs was the DC defender 16 portable nuclear warhead launcher. It gives a load of 100 tons and is supposed to be lightweight enough for an average soldier to carry. How could you make a weapon to do these tasks?

It looks pretty difficult. According to a chart I found, lightest nuclear bombs the US has built weighed about 20 Kg and had a yield of around 0.1 Kt -- ten thousand times smaller than what you want. The lightest 1 Mt bomb built seems to be in the neighborhood of 200 Kg -- so just the bomb itself is not man portable, never mind the launcher.

It's hard to imagine a launcher which weighs markedly less than what it launches. Again, not man portable!

I'd also note that it's considered good practice to lob hand grenades far enough that the lobber is not injured. Likewise nukes. So for a 1 Mt bomb, you need to lob it 5-10 miles, at least.

I don't think that there is a possible man-portable, real-world, 1 Mt bomb and launcher. (At least as long as you're only talking one or two men.)

In the 1950's, as part of the "New Look" reorganization of the US Army, small nuclear weapons were devised to provide tactical nuclear firepower at very low levels to make up for the lack of numbers between deployed US forces in Europe (and presumably anywhere they would be deployed) and Soviet forces. In addition to nuclear artillery (see the "Atomic Annie" nuclear howitzer), the Army devised the M28/M29 Davy Crockett Nuclear Weapon System. 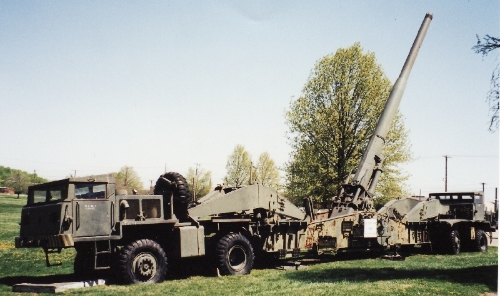 M-65 nuclear artillery piece. While self propelled, not very portable 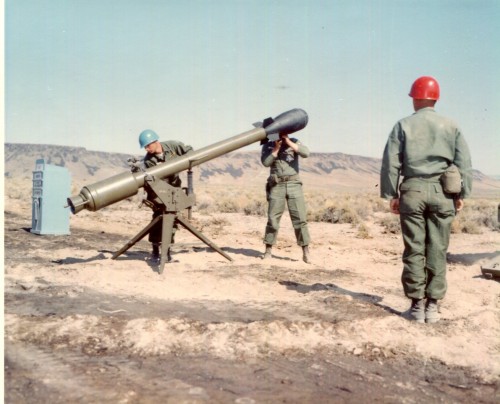 Setting up the Davy Crockett for firing

If the rather complicated firing sequence wasn't enough to dissuade people from using it, the fact that the small projector barely put the firing crew out of the blast radius of the weapon probably inspired some second thoughts about actually using the thing....

The power of atomic weapons actually makes them largely unsuitable for tactical missions on the ground. The launching crew will pretty much be in harms way, the nuclear devastation and radioactive fallout will make crossing the ground difficult post blast and there are generally few high value targets that even require nuclear ordinance on the front line (ships are almost by definition high value targets, so using small nuclear warheads on torpedoes makes much more sense). Attacking targets with sledgehammers really doesn't work well except for a very limited number of targets.

For the sorts of targets which actually do justify nuclear servicing, sending a long range strike via aircraft or missiles works far better, and the deeper in the rear the target is in relation to your forces, the better for your troops.

Let your Warrior Robots carry it, instead of the human soldiers. As a bonus, they can also deliver on foot and detonate the device - eliminating the need for a separate delivery system.

Since your robots' weight capacity and cleverness is whatever you decide, you can pack whatever warhead size you need without worrying about human stamina, danger-close friendlies, and misdelivered ordnance...except to further your plot, of course.

Look at the chart showing what we've built. The only warhead that matches your edited requirement is about 100 kilograms. That's not something a soldier carries around.

Note that the absolute minimum is 11 pounds of U-235 plus the weight of the detonator and such a weapon will be unreliable. By the time you add a rocket to deliver it you're beyond what a solider can carry into battle.

The closest anyone has come to what you're after are nuclear demolition charges meant for special forces use--and they're carried as two pieces and the delivery system is by hand--infiltrate and place the bomb on what you want to destroy. The nature of nuclear physics makes it unlikely there will be any substantial improvement in such weapons.

5
Process for creating cultural weapons
6
Man-portable 5-20 MJ railgun?
6
Could we build and deploy a multi-gigaton nuclear bomb with today's technology?
1
How to construct a loud sonic bomb?
9
The feasibility of a robot with a chest-mounted missile launcher
7
Man-portable weapons for post-disaster Arkansan troll hunters
11
Man-portable anti-satellite weapon
4
Use bomb to detonate a white dwarf?
1
Feasibility of making a imploding bomb