A world inhabitable for half the time [closed]

How feasibly could a planet's orbit create this?

Maybe this could be done with an extremely elliptical orbit. https://en.wikipedia.org/wiki/Elliptic_orbit

Here is how I envision it. 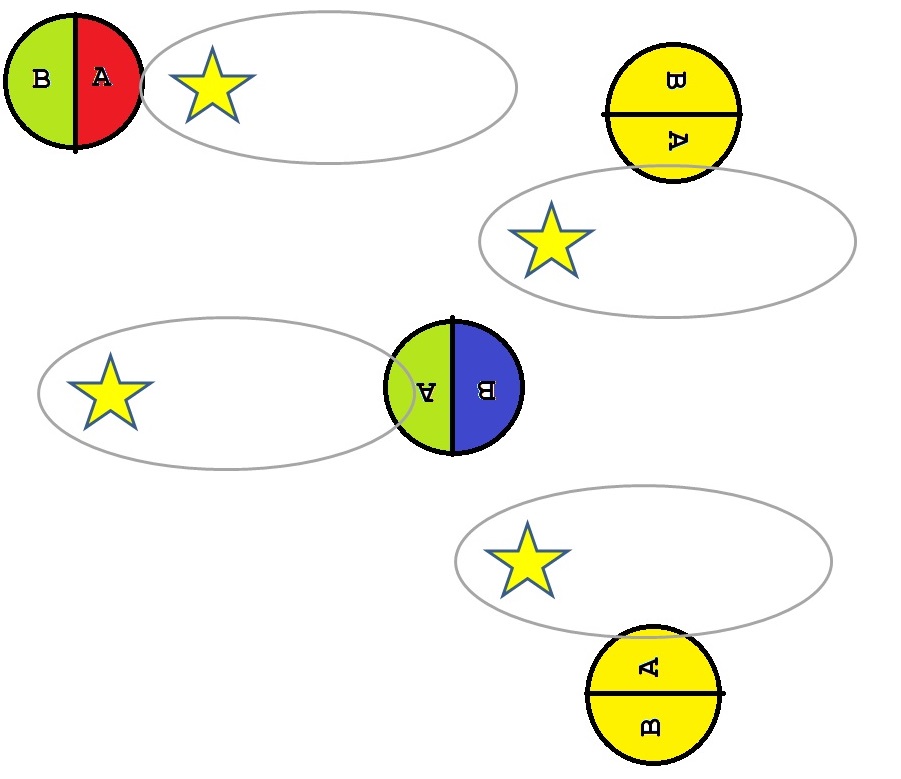 In this planet, the day is equal to the year - the planet turns on its axis once for every trip around its star. A is always day. B is always night.

The orbit is simple it's one with no sidereal rotation, it's also impossible because stellar gravity will supply sidereal rotational energy at least sufficient to create tidal lock, this will be debited from the planet's orbital momentum and degrade said orbit rapidly.

No idea what it would do to a population because like I said it can't happen, not for long anyway.

whilst Hemisphere B has pleasant Earth like conditions(temperature from 0-100F).

If your planet has an atmosphere this will not happen like this. The atmosphere will tend to move heat from the cold region to the hot one and the larger the temperature difference the stronger the winds.

As a result your planet's temperate ("nice") side will actually get quite a lot of heat and complex weather which will make it just as unpleasant.

(possibly due to coming close to its sun during its orbit)

You have a misconception about this.

There's a very approximate quantity known as the effective temperature which is a rough estimate of planetary temperature (ignoring atmosphere and rotation effects) which tells us that :

where $T_{eff}$ is temperature and $R$ is distance from the star.

Now $R$ is very large compared to the size of a planet ( if you want an inhabited planet ) and this means the difference between $R$ at the near side and $R$ at the far side is minute. You won't gain any temperature difference like this, it's too small an effect.

As it orbits,it rotates so Hemisphere A becomes pleasant and Earth-like whilst Hemisphere B becomes uninhabitable due to extreme cold.

Well heat won't just change instantly. You've heated up one side and as it rotates it distributes the heat via the atmosphere and also stores heat in the ground. Simply rotating won't change anything instantly as e.g. Earth's day and night show.

Now the vegetation, animals and insects and the water or liquids in the hot atmosphere won't just suddenly become part of a pleasant temperate climate. Instead the atmosphere will continue to act like a greenhouse (a bit like Venus maybe) and you'll still have a pressure cooker.

The effective temperature (our rough theory estimate) says Venus should be about 312 K compared to a theory value of about 275 K for Earth.

The huge difference for Venus is because of it's atmosphere. Get too hot and your atmosphere becomes a runaway Greenhouse atmosphere.

There is practically no difference between day and night temperatures on Venus.

This is the direction your planet would head for - very quickly. Once you start putting a lot of water vapor into the atmosphere you have this problem.

How feasibly could a planet's orbit create this?

Impossible under any circumstances with an atmosphere.

Consider a binary planet situation. The pair orbits around the sun just like Earth does, and the pair spins around a point between them such that, on each planet, one side gets sunlight and night and the other side is permanent night because it is shaded by the other planet. Over time, the planet also turns on its axis, changing which side is in shadow. Put the pair close enough to the star so that the shadow side is the habitable side.

Tidal locking may slow your rotations — I’m not able to model this system... it may not be stable. But if I were modeling, something like this is where I’d start.

If we say that the orbit is possible, here's how the planet's general atmospheric circulation might look (first looking from the side, then from the sun's perspective): 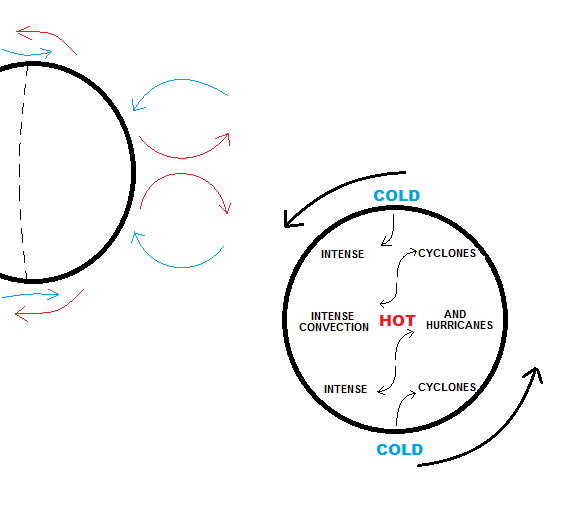 Here, side A is shown along with the circulation and phenomena one might expect to find at different latitudes.

27
How does a migratory species farm?

36
How extensive could a habitable twilight zone be on a tidally locked planet?
3
Moving people from a dying planet onto the moons of a gas giant
6
Two orbits, Four habitable planets in the goldilocks zone?
10
The (Alternative) Reason for the Seasons, Part 2: Variable Star
1
Conditions for human life in a Jupiter-like system
9
Is this planetary moon's calendar possible?
2
How do I figure out temperatures and amount of sunlight for a world?
6
In what ways would the earth's orbit/atmosphere/ocean currents have to be different in order to create summer with long nights?