Would a lack of landmasses at the equator change climates closer to the poles?

I'm imagining an Earth-like world with a single large continent centered on the north pole, and not reaching entirely to the equator. As ocean currents play a large role in shaping weather, I'm curious how the lack of landmass at the equator might change climate zones on my planet. Would we still find tropical, subtropical, temperate, and tundra climates at similar latitudes as we would on Earth?

As noted I'm leaving my original answer to the rather vague original question right where it is because I think it's the right answer for that question; what you're asking now is a very different question.

What you're talking about is the weather and ocean cycles around a polar "super-continent" I don't have the expertise to give a truly comprehensive answer to this, I don't think anyone does, but there's a few things that we do know from the fossil record of Pangaea:

Some notes: the term "Tropical" is latitude defined and changes depending on rotation axis tilt, it's the latitude at the which the noon sun is directly overhead at mid summer, any farther from the equator the sun is never directly overhead at noon but further down the sky as your latitude increases. I've assumed you were still going with the southern coast around the 45 degrees latitude mark of the original question when looking at the land biomes you would and wouldn't see.

To answer that last question, you'd see the tropical and polar average temperature/climate bands expand due to the relative lack of heat circulation with the subtropical and temperate zones getting squeezed thin between them, all the temperature zones would be more linear in their distribution since you don't have the warming or cooling of say the Gulf Stream in Europe or the Humboldt Current along the Chilean coast. The driving force in vegetation cover types and distribution will be water availability rather than temperature and I would expect that to be in direct relation to the distance from the sea rather than governed by higher atmospheric circulation. If I'm right about that then you wouldn't see subtropical deserts down to the water's edge like we have today even if there was land at those latitudes.

Hit me up in comments if there's something else specific you want me to speak to.

Short answer, yes and yes to-a-point. Lets consider Earth, we have a pole centred continent, we call it Antartica, but it only extends to about 60 degrees south at the northern limit of one small peninsula, a third of the way to the equator. To get halfway we need to go to 45 degrees south. Such a continent is going to consist largely of ice fields and tundra but 45 degrees south is just north of New Zealand's Stewart Island so you'll also have some cold temperate biomes and cold deserts caused by either altitude or rain shadow. Biomes that won't exist; anything with "tropical" in the name and the hot subtropical deserts. Anything in high latitude temperate forests and steppe/glassland is possible.

Major note don't live on the coast, such a world is going to have some truly catastrophic storms since cyclonic systems can put in literally thousands of miles of travel over hot tropical waters gaining strength before they're forced north or south by blocking pressure cells near the equator.

Sure you could. Earth was like this once. Here is Earth in the middle Triassic. 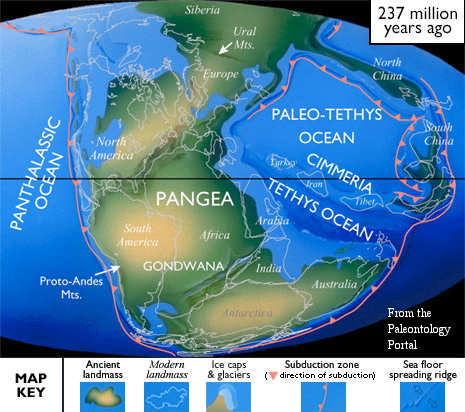 At this point the single land mass is called Pangaea and the single ocean the Tethys. What will become the continent of Laurasia straddles the north pole and Gondwanaland the South Pole. You can walk from pole to pole.

Not the answer you're looking for? Browse other questions tagged climate geology or ask your own question.

4
What would happen if there was no Antarctic Landmass?
5
How would the ocean currents of earth be altered if there was no Central America?
5
How would a large arctic mountain range affect the weather?
4
What would pressure belts look like on a world with continuous land?
3
What would the geology and climate of a supposed landmass near the pole be like, assuming a thoroughly warmer planet?
3
What would the climate on a planet with 85% or more of the surface area covered in water be like?
2
Does my climate map work?
3
Are the ocean currents and climate zones of my world plausible?
5
Is The Climate Map for My Alternate Earth Accurate?