How can my creature use explosives to get the maximum bite force/speed?

I have a creature in which its main feature are its alligator-like jaws. It's carnivorous, incredibly aggressive, and is a reptile. Let's call them boom-agators.

Now reading through many different alligator and crocodile bite forces, they have a bite force of 3,700 pounds per square inch, or 16,460 newtons (saltwater crocodile).

I'm looking to get much more explosive with my reptilian bites the only way I know how...adding explosives to the mix. The idea is that in the jaw of my reptile, a small chemical explosive (think airbags) would combine and react in a small piston-like cavity in the jaw, propelling the jaw closed with the force of the reaction.

Now obviously, having explosives in your mouth seems like a Bad IdeaTM, however for my story to be plausible1, I need for these to be explosive based. There's a few problems that I think I've addressed, but have I missed anything that might cause issues for this animal.

I also just saw this question about a crab that needs to escape my predator, however I'm looking for the other side of the equation.

So with that out of the way How can my creature use explosives to get the maximum bite force/speed?

1 Guy gets stranded in a Bayou environment in which these live, and must harvest these chemicals and glands to get revenge on those who wronged him.

You basically gave the answer yourself: airbags in the jaws. Your animal's teeth rest on a semi-flexible bag containing the explosive chemical. Two layers of bone in the jaw: a larger one, the regular jaw, attached to the skull, plus another extra adamantium-bone layer attached to the teeth, and the membranous airbag conecting them.

In normal conditions, the animal is able to open and close its full mouth at regular speed. The airbag is shut down, thanks to the sticky explosive liquid. But when it is Bite'o Clock$^{TM}$, a nerve signal triggers the explosion and the bag immediately inflates, sending the bone-with-teeth upwards and away from the regular jaw. The connexion with the upper set of teeth is almost instant and catastrophic to anything that is in the middle. After the event, the gas deflates relatively slowly through the small pores in the bag, while a new batch of sticky explosive liquid is secreted by specialized glands, much like if it were saliva.

As for the explosive chemical, we could work with a something chemically related to nitroguanidine, which presents a molecular structure close enough to what is easily biologically available and a good explosive, see Explosive behavior of nitroguanidine. And it is used, with other stuff, on actual airbags, so one could work some force numbers from there...

Basically what you will want is a concrete nailgun. 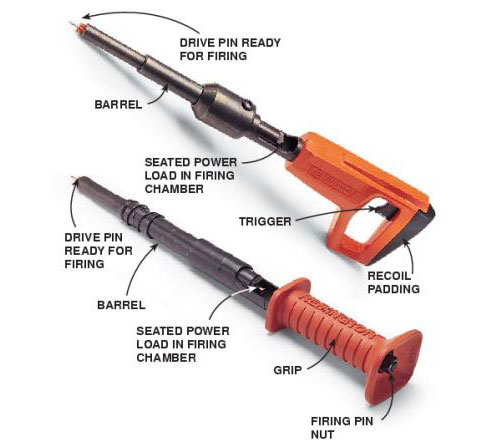 Concrete nailguns like these use a small firearm charge (such as a .22 blank) to generate pressure to drive a nail into difficult materials like concrete. It's designed to move the nail fast enough to limit the concrete's ability to distribute the shock outward (which would lead to chipping). This is perfect for you because it lets you avoid one of the banes of any firearm setting: momentum. If you tried to drive a giant object forward, like, say, a 20mm bullet, it drives back with comparable force. This is less than ideal in the middle of your skull. Even with adamantium bones, you still have to carefully construct the bones to transfer that momentum into the adamantium joints properly. This will likely limit the mobility of the jaws. Also, as a general principle, momentum is bad in the head. If mismanaged, it tends to lead to concussions as the squishy brain impacts the hard bones. If you fire small nail like objects into the prey, they have less momentum and focus all of their penetrating energy on very small points.

You obviously wouldn't want to leave a nail in the body of the enemy. That's inefficient. So you probably want it to be more like a captive bolt pistol used in the slaughter of cattle. The nail would fire forward and then be retracted.

Retracting could also be an issue. After all, this technology is designed to fire nails into concrete so that they stick there well enough to hold up the frames of houses. Obviously you'd want muscles with a lot of mechanical advantage, like the muscles which pull back on the mantis shrimp's hammers. However, to play it safe, I'd also have a second explosive charge ready to explosively retract the nail if it does indeed get stuck in something horrible like concrete. One would not have to worry about it getting stuck in reverse because, unlike the attacking case, we get to craft precisely how the nail will impact at the point of maximum retraction.

If you're doing all of this, you probably also want to maximize lethality. You might as well also make the nail slightly hollow, and have an explosively generated gas charge ready to inject like the Wasp Knife does.

Thus, the full process would be:

I think I could believe a story with this set up, since mother nature pulls some bullcrap similar to your creatures. Bombardier beetles utilize chemical explosives as a defense mechanism and woodpeckers deal with freakish amount of force being self applied to their bodies, so truth might be as strange as your fiction. Heck, mantis shrimp punches have a snap that can probably rival the most overpowered mousetraps on the market.

Keep in mind that the fish that make up their diet might have to be durable, as well as fast, to justify this evolved specialization. Otherwise it would be smarter to evolve something to spear the fish, like a crane's beak or a preying mantis' claw-things.

A magic weed that produces explosive chemicals would probably be a good addition to this story as a way to make your boom-agators seem more plausible. Not only that, but you could have your character try and make weapons out of the weeds, only to realize he can't get the purity he needs. "I'll have to take it from the gators. **** me."

Oh, and peat moss is a plant that utilizes explosive force to launch its seeds, so your magic weed can be justified as well.

(Huh. That is the first time I have used the term magic weed and actually ment a weed that has supernatural properties.)

18
Armor for Giant Crabs to Defeat Explosive Bites from Predators

5
How would a Dumbo-like creature filter noise?
35
Why would the mouth of a creature evolve to be away from the head?
9
How could intelligence be balanced with a large muzzle?
11
is it possible for creature to have loose jaw like snake but also has enough bite strength to bit off big chunk like most predator or human do?
6
Having a split lower jaw while maintaining a strong bite force
5
Can the dunkleosteus jaw model work on a land predator?