In this Earth-like world, a multi-billion dollar privately owned aerospace/defense corporation is devising a secret plan to manufacture a fleet of nano-bots. These nano-bot have swarm intelligence and appear as a silver metallic tempest once fully deployed and airborne. After years of simulations and prototyping, a final design was settled upon that will be best suited for their intended mission. The defense corporation has reached the following specifications below by design, and thus should be considered unalterable:

The hangar must be chosen carefully because the nano-bots are in a vulnerable state when they are recharging. They are vulnerable not only because they are immobilized, but also the nano-bots will lose longevity if they recharge in a place that has high ambient entropy. This is a weakness of the design that could not be avoided. The aim is that with the proper hangar, this flaw can be mitigated.

Although it's not a perfect analogy, I want to make a quick comparison to how the US military uses hangars in the desert for its aircraft. In the desert there is less moisture in the air, meaning less corrosion and maintenance. Here is one such base: 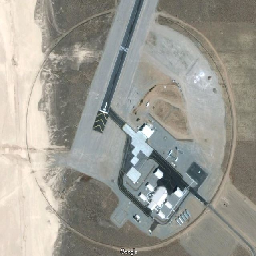 At first glance it would seem that the desert has lower entropy than somewhere else, say if the military decided to keep the planes on the beach. (corrosion is mostly governed by kinetics, not so much thermodynamics, but just humor me here) However, holding a few things constant (volume of sand, type of sand, ect) the desert would actually have a higher entropy than the beach. This is because the desert has a hotter average temperature, and ceteris paribus, entropy for a simple system increases with temperature. One way to get the intuition behind this is:

Where $H$ is enthalpy, $T$ is temperature, and $S$ is entropy. So while it's not a perfect analogy, we can see that the defense corporation as well as real life military both need to choose a hangar location that is best suited for their respective crafts.

Main Point: So instead of conventional planes and corrosion, we are instead dealing with nano-bots and entropy.

What is the best natural location for a secret hangar for the nano-bots given that the defense corporation needs the hangar to be installed in a place with the lowest possible entropy: $S$?

Note: This natural site location is in addition to an artificial enclosure for the nano-bots. The defense corporation wants to minimize the entropy of the surrounding natural environment as a precautionary measure to protect their investment.

Reminder: We are only interested in a natural environment with low entropy. We cannot use equipment to manipulate the area around the hangar. The stipulation is for the mission, the outside natural environment must be natural. (you can rationalize this as staying clandestine or related issue)

Sharp mountain peaks are the key.

The total entropy of a system is dominated by Gibbs energy of its atoms, unless one spends a great deal of time creating structure. Since we are talking about natural patterns, we will assume that if any structure exists, it is well below the effects of free energy.

Since Gibbs free energy's units are units of energy per mole of matter, decreasing the number of moles of matter in the specified volume is key. Best case is to launch it into space. Second best case is to have it flying in the air. In both cases, we minimize the number of atoms in the specified volume. However, both of these fail the secrecy goal.

A sharp mountain peak would permit one to install the hangar in a way which minimizes the amount of solid matter that must be in the volume by ensuring there is open-air all around it. The sharper the peak, the less solid matter is in the volume, and the lower our total entropy is.

Of course, I do have to point out that this answer is specific to the question being asked, and abusing loopholes as such. However, this is also a convenient answer for trying to explore real solutions. When one looks at the exchange of entropy between the system and hangar via interactions, then it turns out being embedded in cold granite is a highly ideal solution. Granite is very stable.

As an added perk, if the nanobots are willing to relax the no-modification rule, it would be easy to begin drilling out underneath the hangar and replacing the granite with a very low entropy material, such as a single uniform crystalline structure. If one left the outer shell of the granite alone, these changes would be undetectable.

Thus, the mountain peaks work well for the question as worded, and are effective if one desires to use more typical practical considerations for building a highly stable hangar.

I'm aiming for the cheapest thing I can think of that presents as few degrees of freedom as possible, thus: low entropy. My ideas are heavily influenced by my professional background: trying to minimize quantum decoherence in (nanoscopic-sized) molecular spin qubits, but my background in thermodynamics is just that of a Chemistry graduate.

I'd go for a clean hole in the ground, in a naturally cold place (to save in refrigeration noise). I'd go for low pressure (so no ultrahigh vacuum needed, again to save in pump noise) and low temperature. All in all, as little machinery as possible. Ideally, a clean, insulating & diamagnetic box, surrounded by a faraday mesh.

The hangar would essentially a box of a material that is insulating (or at least not a good metal) and capable of presenting clean surfaces. Silicon is maybe a good choice because there is already an incredibly good industry in place to produce it in clean conditions. For an extra price bump, you can get fairly isotopically pure $^{28}$Si.

Afte the bots get in, (most of) the air gets pumped out, and we shut down the pump. Electricity comes through the cables, but the box is otherwise insulated from external electric fields by the faraday mesh. A few cold gas molecules in a box that is in any case essentially empty. A thick layer of a rather clean and rather cold material. The faraday mesh (metallic) can double as mechanical protection for the silicon box.

For details on the location, think something like the Svalbard Global Seed Vault, which was less clean but had more requirements and was built using real technology with a 10% of the budget you have in mind.

What you're looking for is a volume that can be successfully refrigerated and evacuated. This means it must be braced against pressure, and supplied with special airlocks. You also want some fierce radio shielding.

Converting an abandoned missile silo looks like your best bet. Once removed the launcher struts, the silo itself has more than enough volume and is already armored and braced. You only need to cool it down and pump the air out of it. Electromagnetic shielding is already in.

In the end, local entropy will be as low as possible while remaining on Earth; by rights it ought to be very near zero, as regards the vacuum. The microbots will be near the entropy of one another, but they'll be cold and can be kept not in direct contact of one another, on low-entropy silicon, graphene or very thin gold micro-mesh. Possibly, some of that budget could go into the design of even lower entropy nano-mesh.

You could do somewhat better by building the same vacuum chamber in the middle of a crystalline iceberg in the Antarctic, but that has a series of logistic problems all of its own.

Space, the ultimate cold and empty place. Send them up the cheapest way possible, and let them do their nanite thing up there. The temperature of the nano-huddle will sadly never get down to Universe-background-radiation levels, because in cheap orbits, the earth still is a major heat radiator, but still, with a heat shield plenty cold - about 180°K (= - 90°C, = - 135°F). Also, get them a soot colored blanket and radar damper if they are not able to assume the necessary surface themselves (but as nanobots, being smaller than visible light, they should) for added invisibility, and non-heating.

The orbit being, say, 500km up also saves lots of fuel, and therefore money. The usual sunsynchronous orbit will go over the poles, because it's ideal for imaging purposes, but we'll stay over the equator, wich saves fuel again. With about 2500\$ per kg, your 100M\$ will lift about 40 tons, which may or may not be enough, depending on the size of your swarm. (Though even if they are mostly lead (~10g/cm³) and with (100nm)³ just at the edge of not being nanobots but microbots, 40tons are 4*10^19 units... IPv4 wouldn't cut it, you'd need IPv6 to even adress them.

When the time comes, they assume their reentry form, manipulate their magnetism to break orbit by interacting with the earths magnetic field, and come over us like a swarm of very small locusts.

With the constraint of 25m of low-entropy in every direction, space is the best option by far - Standard molar entropy for substances differs, but it's still higher than for no matter at all. Even a ground based hangar has one half of its periphery as solid matter, which at ~40 J/(molK) is much better than water (70 J/(molK)) but a hemisphere of 25km radius contains a f**kton (technical term) of moles, so there goes the neighborhood.

Not the answer you're looking for? Browse other questions tagged technology warfare physics hard-science or ask your own question.

23
How big a black hole is needed for this story?
7
What conditions would be needed for Spartacus to defeat Rome?
9
Details needed for day cycle of lunar world orbiting a gas giant