What would be an actual real life mechanisms of an accelerated healing factor?

I'm writing a rough sketch for a book about a world where people sorta violently and suddenly get barely working superpowers. That is every time each person uses their power they run the risk of killing themselves. (I already almost set up the world with powers like invisibility, intangibility, super speed, their drawbacks and all.)

Now I'm struggling to flesh out a mad psycho character with an accelerated healing factor. This world is very much grounded in reality. Points to keep in mind:

Really need help, 'cause I have this whole world setup and he's the guy that makes the readers realize how dangerous everyday life in this world can be.

EDIT Form the answers I got,the character is a man of average build. When he is injured his body uses every resource it has at hand and heals him but leaves him frail and at the point of starvation. The newly healed parts carry the risk of potentially becoming cancerous. The speed at which the repair is done causes a lot of discharge in the form of heat,requiring him to cool down himself.

(For reference,in my world the one of the lead characters with superspeed has a well developed and more branched circulatory system concentrated in and around his legs. The muscle cells in his legs have a new type of protein that causes them to contract way more faster in response to a signal. This only pertains to his legs. He can only run at about 101m/hr or 180km/s and that too for barely a 1 minute. But he only only run in one direction,he cannot change directions while running and he only has a normal human level perception of time. Running at high speeds causes his bones to have multiple severe micro fractures and he can't breathe properly while running. His whole body is hurt from the air resistance as well,he also has to build up speed and constantly hits into thing injuring him. And he suffers from the effects of inertia. He constantly has to see his doctor and running at high speeds for even once in a day leaves him sore and unable to walk for 2-3 days. He also has to eat a lot for the required energy and running leaves him on the brink of death )

The mad psycho character needs to heal bullet wounds,cuts and broken or dislocated bones in under a minute. The healing does not have to proper as well. And no stem cells and definitely no nanobots. The power is a mix of torture,stress,trauma and mutation

Healing takes a ton of energy and materials to kill off damaged cells and replace all the damaged/lost cells with fresh new one's. Healing factors like those of Wolverine should kill him within a few bullets as his body uses up all it's reserves and can't sustain the remaining cells. The mad psycho character would become extremely tired and probably metabolize a portion of his fatcells into energy and materials, making him a thin, haunted man quickly after any fight where he gets wounded.

Edit: This should be interesting: https://www.youtube.com/watch?v=CLY-FMxsb2U

Regeneration as seen in comic books and movoes would in the very least require an unrealistic amount of stem cells available in the body.

When we bleed, platelets around the wound site secrete chemical signals which attract more platelets there, and causes them to become modified, so that together they can form a clot: 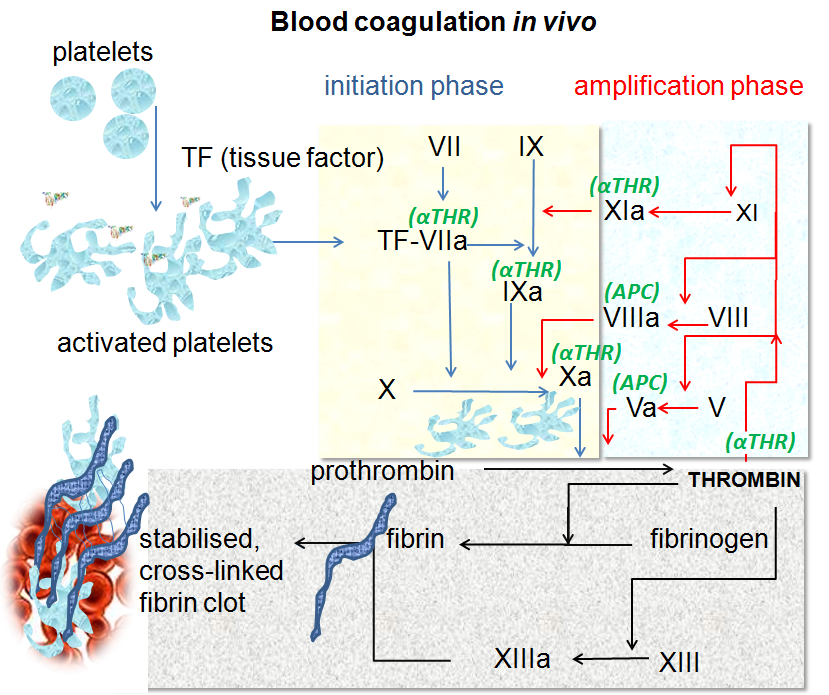 It may be that in the body of a character with super regeneration, platelets go through a process called dedifferentiation:

Dedifferentiation, or integration is a cellular process often seen in more basal life forms such as worms and amphibians in which a partially or terminally differentiated cell reverts to an earlier developmental stage, usually as part of a regenerative process.

But some stem cells migh stick to each other forming huge balls inside the character's vessels. He will be in extreme risk of stem cell thrombosis every time he has even the slightest paper cut. And if the stem cells flow away in the bloodstream and coagulate somewhere other than the wound site, they might obstruct vessels at the heart, lungs or brain. In such cases the character will croak faster than he can say "healing factor".

You're going to be using a LOT of energy to repair all those broken bones and bullet holes. Fat and meat are high-energy-density foods. You could make him MORE fragile by giving him a regular human's metabolic rate. Meaning that every time he used his power, he'd go from healthy to half-starved over the course of a week or a month and he'd be healed.

Or you could go all the way. Give him the metabolic enhancement and healing factor. He can heal all he wants as long as he can consume the calories, calcium, and sugars necessary to keep his body running, but since it's growing back so quickly, it's mostly weak and cancerous.

Look at animals that can regrow limbs and tails and such; mostly amphibians and reptiles that can do this. It is slow, but you could explain it using similar biological mechanisms and just upping the metabolism rate. As another answer stated, this would - realistically - require an insane amount of calories and proteins and calcium and such, so a "realistically" regenerating person would be constantly hungry, especially after any use of the power, and probably need crazy amounts of certain nutritional supplements as you simply cannot get enough of those things from food alone.

Not the answer you're looking for? Browse other questions tagged biology hard-science super-powers biochemistry .

3
Effects of one person needing less sleep?
23
Physical correctness of trolls with high regeneration ability
5
Build a real life Flash - How to create the speedforce in real life?
28
How high can Ludicrous Leg man jump?
5
What sort of claws would be best utilized for melee combat and quickly scaling the walls of a modern day building?
4
Realistic speed for an enhanced healing factor?
7
How would a sole superhero on Earth seek therapy?
2
How can my character transform without losing their powers?
25
How do I stop Bob the gigantic animal from overheating?