So I am building a tidally locked world, but I want the shadow zone to vary a bit. One way to achieve this is through axial tilt. A planet with orbital period = day period, so tidally locked and 0 degree axial tilt will have the same area illuminated at all times. But a planet with the same parameters and say, 22.5 degrees axial tilt will have the shadow zone move by 22.5 degrees from the poles in both directions every year.

If we want to introduce another type of movement we can play with the eccentricity of the orbit. Look up libration of the moon to learn more. My question is this: given the orbital parameters of any planet, how can I calculate the libration in the east/west direction? 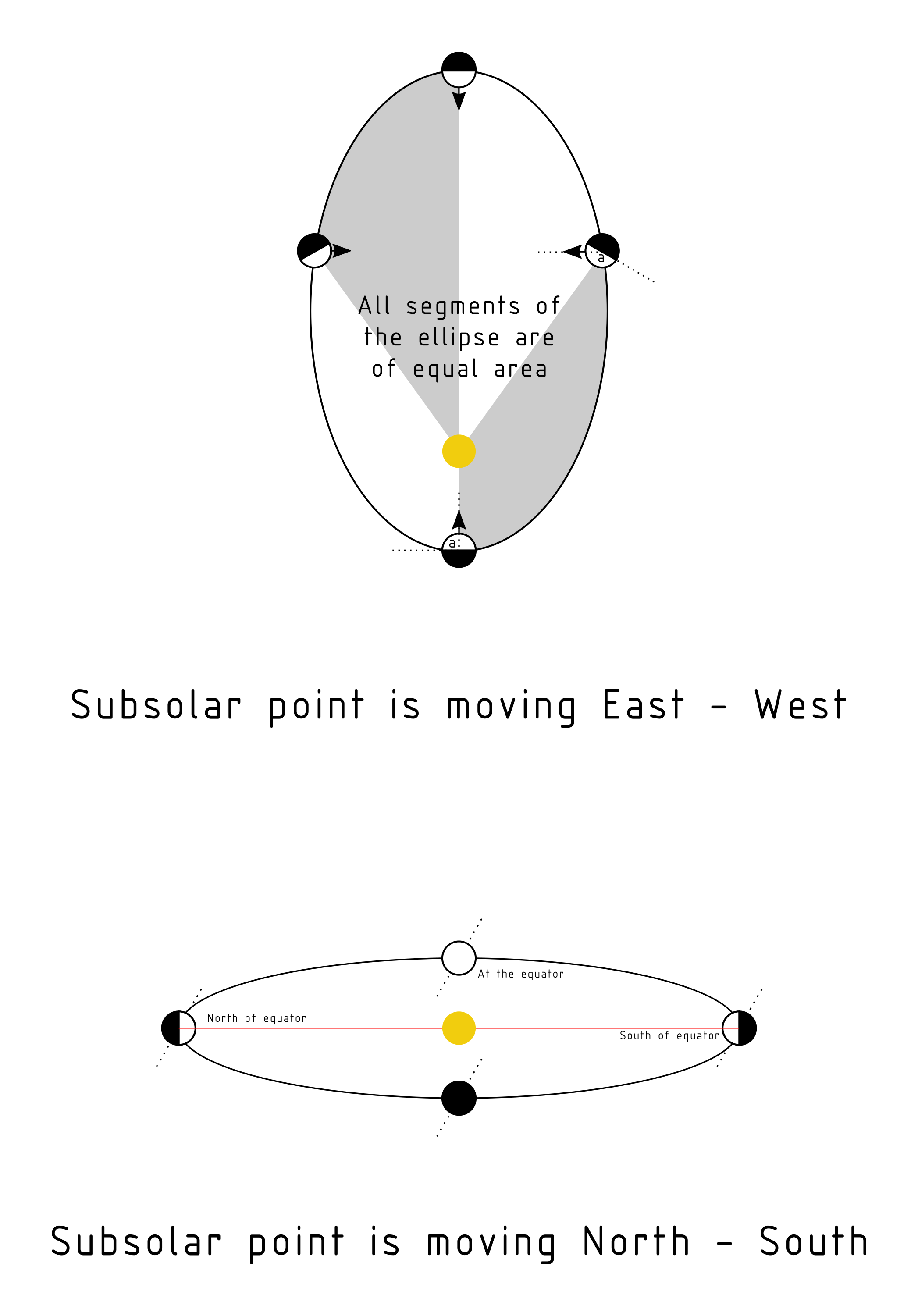 Starting at the bottom of the elliptical orbit, east and west are illuminated equally. A point on the globe just behind the terminator, so in the dark will experience a sunrise at some point between the bottom position and the right hand position. Then a sunset between right and top. Then this point will stay in the shade until the planet is at the bottom position again, after which a new orbit beings and it will experience another sunrise. So one sunrise and one sunset per orbit. What am I missing?

What you're looking for is called the "Equation of Time". That's the term of art for how much a primary, i.e. the Sun for Earth, is east or west of overhead at local average noon. That in turn is how much (in degrees longitude) your shadow zone would have moved east or west.

Please note that, if you have both eccentricity and tilt, the effects can either add coherently or partially (but not totally) cancel, depending on how the axis of tilt is related to the major axis of the orbit. They can't completely cancel because one is once per orbit and one is twice, so they have different frequencies:

(from Wikipedia, but note that the labels on the top two plots are swapped)

The primary moves north and south once per orbit (per "year"), so that's one "day": It rises and sets once.

The analemma (curve in bottom-right of figure) shows where the Sun appears in the sky at nominal local noon on the equator. For your tide-locked moon, that's where it'll always be, so the "at noon" part isn't needed as it is for the rotating Earth. You can see it move north and south due to the tilt, and east and west due to the eccentricity. When the sun is to the east, the east side will be a little more lit; when it's to the west, ditto for the west.

Note that the primary moves east-and-west twice per orbit (per "year"), so that's two "days" for the east and west pole-dwellers: They'll see it rise, reach a peak, set, and just start to rise again twice per orbit, i.e. per year. The east pole sees primary-rise just after both aphelion and perihelion; for the west pole, those are when two primary-sets happen, but both places will see two rises and two sets per orbit.

There's a (Java-based) calculator and plotter for all this here.