What are the Considerations of a currency backed by a Renewable Commodity?

This question is tangent of this one. While reading about the world-building that went into the Mistborn series I began to reassess my own world-building, specifically the effects of magic on the economy. I realized that the magical material in my setting would be more valuable than gold and oil combined, because it is the only way to produce items endowed with magic, which—unlike the talent for being a mage—can be mass produced.

The magic material is a living material that appears crystalline. grows slowly by leeching nutrients the ground. In addition to being magical this material is a desirable additive in both metal work and ceramics. Because of its light weight, strength and flexibility.

My question is this: The nations in my world base their economies on a rare but renewable commodity. What are some of the effects that it has on their cultures and policies?

My question is this: The nations in my world base their economies on a rare but renewable commodity. What are some of the effects that it has on their cultures and policies?

This is not in fact so very different from what we have today. In the end all economies are based on commodities. Note that is plural. An economy cannot function (for long anyway) if it is based solely on a single commodity. Diversification is very important to domestic long term stability.

It all comes down to wealth and good 'ol supply and demand. An economy based on a single export...oil for example, which makes a good modern example. Nations that rely on a single commodity are in significant trouble should that commodity fall. Oil and the 1980's

If this is the single most valuable thing on the planet and it is always in demand (consider that someone will try to come up with an alternative) then you have to ask some questions:

Depending on your answers to these questions it can impact many things. Mainly you need to think about how it impacts the following:

A system like this can lead to a whole host of differences in the world. Perhaps it has led to the development of an all powerful magocracy (I made that word up) that rules the world with an iron fist. Perhaps the crystals are strictly controlled and used only for public works...I think the sky is the limit for how something like this alters culture and social policies but the impacts to the global marketplace are probably not a big change from how the world developed in reality. People will still need other stuff...you can't eat these crystals...or can you?!

So. Currency. I think I may have skimmed over the currency aspect as the question in your OP and the title differ slightly in context (economy versus currency).

I am going to use sugar as an example of a renewable commodity. This is a chart from 1950 to 2015 prices from Trading Economics 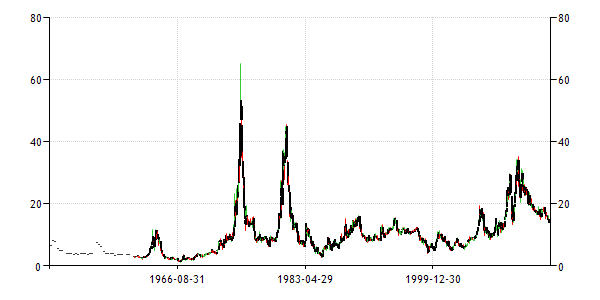 You notice that there are many rapid swings in the value of sugar. This would wreak utter havoc on an economy mainly because it makes gauging the value of things very difficult. I will not claim that the value of gold does not change, it certainly does (see for yourself on the site). But gold is not impacted by weather. Sure it's value changes BUT it is not as susceptible to rapid changes in value.

The impacts would mainly be a greater potential for rapid shifts in the value of your currency. This makes the currency unreliable, meaning many may not even be willing to use it rather going with bartering or unofficial currencies...gold coins maybe ;)

It would probably be closer to an oil based economy than a gold based one. This is because most of it's 'value' is in it's use. if you don't use oil to make things with it, it isn't very valuable. So this magic would be 'collected' for use and trade, but even though it is'renewing' it is also being used (disappearing).

Kind of like the cocoa bean as currency someone else recently mentioned. It is something that would have to be common enough to warrant being used as currency but no so much as to be commonplace. You don't want it as common as sand, but more common than uranium deposits.

It would probably be a fairly reasonable economy, more like a barter system, since the thing being used for currency is the value, it's more 'real' than gold, since gold's primary 'value' is in it's rarity and 'prettiness'.

EDT: One large consideration would be how 'evenly' spread the crystals are. if one providence has a lot and some or most don't then a small minority could be filthy rich and control a lot of the power. It would also likely be the 'power-base' or capital of the country.

There'd be no effect - the government would create fiat money and not "back" it with anything. Much like today's money, which gains its value from the government and its use as a medium of exchange.

Not the answer you're looking for? Browse other questions tagged magic culture economy currency or ask your own question.

5
How to create a world where birth defects are common and where women are still treated equal to men?
6
How to avoid magic from affecting society's technology?
22
Turing incomplete magic, avoiding computers in world where magic is programmable
3
Would a Currency Backed by joules work?
2
How would the economy of currency backed by electricity work?
0
Protections when working with a dangerous supermaterial
9
What are the potential pitfalls when using metals as a currency?
0
How might a multi-backed commodity currency work?