Can visible light be blocked while still allowing for light for plants to survive to pass through?

What I'm thinking for this question is that some kind of filter is put around the sun by aliens that prevents some kinds of solar energy from passing through but allows other types.

Like if it stopped visible light but allowed UV.

Is there any way that the parts of light plants need for photosynthesis can be separated from visible light, allowing the plants to survive but preventing visible light from passing through?

I've tried to do my own research on this, but all I've found is that they require a nonspecific "light", and I'm not sure if this means specifically visible light or all kinds of light, such as UV.

For the question, assume that the barrier around the Earth can sort between different types of light, regardless of whether or not this makes any sense.

EDIT: Close voters, I understand my question may be slightly difficult to understand due to the nature of what I am asking, however reading the answers below should allow you to see what I am looking for, and show that there are others who understood the question even if you didn't.

TL;DR you are looking for this image: 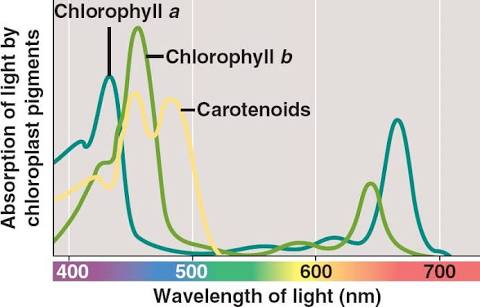 As you can see, plants depend on those frequencies for photosynthesis. They can absorb some UV light (wavelengths close to 400nm), which we naturally can't see (except for some rare people who have no lens in their eyes), but that's not optimal.

Plants living in such a world would evolve different pigments for photosynthesis. Life always finds a way. As for our own plants from Earth, many species might thrive, though I think most wouldn't. There is only one way to know, and I have neither the space, time, seeds, black light lamps, nor the soil to test it out. Food for thought: the ozone layer does not absorb UV light in wavelengths ranging from 315 to 400nm (see the link above), and by the graphic it seems that it is absorbed just as well as red light.

Since blue and violet light supports photosysthesis for many types of planets, some near ultraviolet frequencies probably also support photosynthesis for plants.

I don't know if ultraviolet light alone would enough for plants to flourish if aliens cut off all visible light from Earth.

But on an alien planet that didn't have an ozone layer for some reason, plants might have evolved to use many more ultraviolet frequencies that are blocked by Earth's atmosphere. Thus such a hypothetical alien planet might have plant life that survived having all light except for ultraviolet light blocked much better than Earth plants do.

Plants on earth require visible light. Animals have adapted to use the same light that is available after passing through Earth's atmosphere. On an alien planet, a different atmosphere could potentially have caused the evolution of different plants that utilize different wavelenths. But the aliens would would also have developed sight based on those wavelengths. So they could block out what we consider visible light, but they would be seeing on different spectrums.

If I guess where you are going with this, I should also mention that real Astronomy analyzes radiation at every level. We are looking at visible light, infrared, radio waves, gamma particles, neutrinos, etc. so blocking your sun from one portion of the spectrum would not hide you.

Depending on why you want to block visible light, there is a possible solution, but it lies in the shield, not in the plants:

If your reason is to prevent life from seeing space, your planetary shield could be fluorescent. It blocks visible light, but it absorbs UV light and discharges it (via fluorescence) as a fairly uniform glow of visible light on the inside of the shield. This means that the only evidence of "outside" you can see is when a suitably large shadow is cast on the shield (e.g. during a solar eclipse)

(Quick note: Photosynthesis - and other processes, such as Vitamin D production in animals - required absorbing light. Colour requires reflecting light. So, if you take an RGB colour for your plant's leaves and invert it, then you get the visible colours that it absorbs - of course, not all of these are necessarily used for photosynthesis)

There is already a company in California doing this (soliculture), they are called "smart greenhouses" and use glass tinted magenta. They claim plants grow just as well in their green houses and have the potential to produce solar power as well. Take a look at this article detailing more about the idea.

you can also go to their corporate page. http://www.soliculture.com/

Not the answer you're looking for? Browse other questions tagged biology environment earth light sunlight or ask your own question.

10
What would the eyes of a cave-dwelling race be like?
2
Can a theoretical case be made for "transporting" consciousness via light?
16
What impact is required for a visible (from Earth) ejecta plume on Earth's Moon, and would the Moon survive?
5
A double-bright Moon and plant growth
8
Can fiber optic cables be used to pipe sunlight into an underground bunker for growing plants?
5
How would plants evolve with longer days?
2
If visible light from the sun stopped hitting the earth but the sun still existed, how would this affect the earth?