I am designing a fictional world (no magic, real-world technologies). I have an unexplained anomaly in my world: There is a natural "bold spot" in the jungle (in the thousands of square kilometers), at a latitude of 9°S. The land is very fertile, hence there is intense agriculture.

The technology level is of the 1930's, with requirement for manual labor. My issue is that the number of farm hands per hectare varies widely across the real world. The real world number ranges from 5 to 0.01 workers per hectare in today's times. [I can't find that reference online]

I picked the number of 0.8 workers / ha. (Imagine approximately 2 football fields of crops, with a single permanent worker responsible for it). My farm sizes vary from 200ha to 4000ha. In my initial design, I neglected to "house" these workers. Now, I'm retrofitting the design with farm worker villages. I group the labor from 2 to 5 of these farms into a "village". (Transporting the crop from these farms to the market / storage is an issue, but is beyond the scope of this question)

The issue is, that these villages are of substantial size: On average, they have a population of 7,000. This population also includes services like schools, governance, religion, basic shopping, doctors, entertainment (theaters and libraries). Land is also provided for a cemetery, and a waste water treatment plant. Villages provide no industry or commercial offices. These "villages" are build to urban standards, with each farm worker household having a free-standing house (400m² plot). The villages are usually within 200m to 2km of the farm house. The villages are approximately 250ha in area.

The question is, is my number of 0.8 workers per hectare (100m x 100m) realistic? The issue is that a 1017km² county holds a population of 267,480. That gives me a population density of roughly the UK. http://statisticstimes.com/population/countries-by-population-density.php With about 28 to 30 of these Counties, I'll have an agricultural population in the millions. The grand plan for the map is to iterate through time (5 years at a time) until the year 2020. I will be installing highways and other modern infrastructure when the time is right. Bonus question: As I iterate through the decades, what do I need to look out for?

population alternate-reality agriculture
Share
Improve this question
asked May 13, 2018 at 8:20

Amount of worker per hectare is totally dependant on what you farm. For example: one worker could crop 0,5 hectare of wheat a day. With scythe. While picking strawberries would require much more hands to have same results. In 1930 CLASS introduced first combine. So a machine that not only cut but also pommel.

But that just extra information. What you are really looking at are Sovkhoz in Ukraine, radhósp to be exact. First you have state owned land. Second very fertile land (Ukraine). Third you have whole logistic placement. So for example you will know that state operated bus service to larger centres with doctors, schools and luxury shops while "on site" there's only houses. Food was either made at location or traded with other radhósp. Other usable good were delivered by truck where you could buy stuff. Like the one below 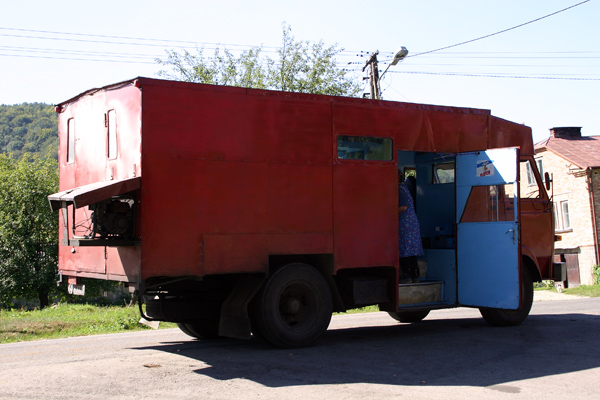 You could find that average size of such farm was around 15k acres while it sustained 200-400 households. With one household of 4 people, 2 adults and usually 2 children. 400 household could easily fit in 10 blocks. Which require less materials, building time, maintenance and so on. Also them having a house would be a waste of space. If the land is fertile it's better not to split that 40 acres in 400 patches. It's better to spend five days on working at once than to have 400 people work alone on their land for 5 days.

What is important - with creation of sovkhoz state rushed industrialization of productions. So tractors, combines, spraying, fertilizers. BUT not education on how and when to use it. That with state forcing production and results, with force grabbing any seeds created Holodomor

Not the answer you're looking for? Browse other questions tagged population alternate-reality agriculture .

11
RPG adventurers - the ultimate migrant workforce?
6
Practicality of lighter-than-air aircraft for temporary agricultural irrigation?
2
How Large could this Optimized Preindustrial Population Get?
6
How large could a population of supernatural beings be and still be plausibly hidden?
15
Population Size of a Colony With a Large Gender Disparity