How can I tell what my ringed planet will look like from the surface?

I'm considering writing a fantasy novel which takes place on a world with a ring. This ring is a very important part of the story, and I therefore want to be as accurate as possible in describing what it would look like from the surface, and how the light would interact with it at different locations and times.

This article is the best resource I have found, but it is limited. I cannot, for example, tell what it would look like during sunset/sunrise. Would the rings slowly become visible/invisible as the planet rotated? Would they be close enough to the surface to be visible even when in the planet's shadow? What about the shadow cast by the rings themselves (they're there on Saturn, so I assume they would exist on my planet as well). Are those limited to specific lattitudes? When do they appear? Just how dark would it be? Would the ring be outlined at all, like during a solar eclipse? These are questions a few pictures (though admittedly fantastic ones) cannot fully answer.

That is my question: Is there a resource which will allow me to see how the rings/sky/sun/earth looks at any location/time on my planet? Ideally would be a scientifically-correct 3D simulation which I can play around with all I want, but I have yet to find one.

Notes: For all details, assume the planet is earth (or identical to Earth) and that the rings are identical to Saturn's rings, save that they are scaled down to Earth's size (they maintain the same Planet/Ring ratio). Remove the C and D rings (the two innermost).

A few things to think about:

If the planet has a tilt, like earth, the position of the rings in relation to the sun over the course of the year would change. Each latitude would have a distinct "ring shadow calendar", of which duration (how many days out of the year), intensity (darkness of the shadow), and how that darkness changes during the day as the position on the planet enters and exits the shadow would change.

For instance, if you're in a mid-latitude, and you're in "ring shadow season" you may wake up to a sun rise, and then the sun "goes behind" a ring. A few hours later it comes out again and things get brighter, and then darker again as the sun passes behind another ring. At mid-day the cycle reverses itself.

Show a good photo of what this may look like. Imagine you're on the surface, passing through the shadows during the day.

The rings would look like high, dark clouds, and the light/dark transitions would be pretty dramatic.

If you're in the summer season, you wouldn't experience ring shadow at all during the day.

You can get a good idea of this shadow here:

When you're in the winter side of the rings, you're on the shadow side or back side of the ring, and they would be dark, though you would still see them due to light reflecting off of ring dust.

Shows a the backside of the rings. Not nearly are bright, but you can see the bands. You can also imagine being on the surface, passing through the different bands of shadow during the day. At night you'll see dim rings and the planet's shadow going across the sky just as you would during the summer.

But what happens during sunrise and sunset? The rings would retain their brilliance, but wherever the light travels farther through the atmosphere, more blue light scatters out, leaving red light. This would be most noticeable after the sun sets, making the portions of the ring that appear near the horizon look orange - just like the moon looks when it rises. So at night (on summer side at least) you get bright rings that go from orange to white back to orange as they span across the sky.

One thought is that summer, especially at mid latitudes, would be a very bright time of year, given the amount of light reflecting off the rings throughout both day and night.

So you are concerned about the appearance.

The best thought I have have on that is 3D modeling software.

Blender is a free program that is easy to learn how to use.

You can setup your surface, a light source, and then a reflective plane and let it bake. If you give more details about location on your planet I could probably do a few renders for you at different times of day, but honestly it would probably be a fun project to figure out yourself.

OK, so I did some initial rough (ROUGH) renders from an orbital perspective. These are not necessarily to scale, though I think I got the lighting write. I treated the rings as thin Torus, set to 95% opacity (B Type rings block most light). I treated it as a solid ring rather than a banded one. A banded one would result in mostly the same effect (just banded) that we are seeing in these images (though with atmospheric distortion).

The most important thing to take away from these initial renders is that the effect will depend on three important factors. -What time of the year is it? -Where on the planet are we? -How large are the rings?

Of course, as I am posting these, I just realized that I wasn't using cycles rendering, so they aren't nearly as physically accurate as you would probably like, I can rerun them in the morning and then do renders from the surface of the planet. (Been too long since I have used blender, a bit rusty). 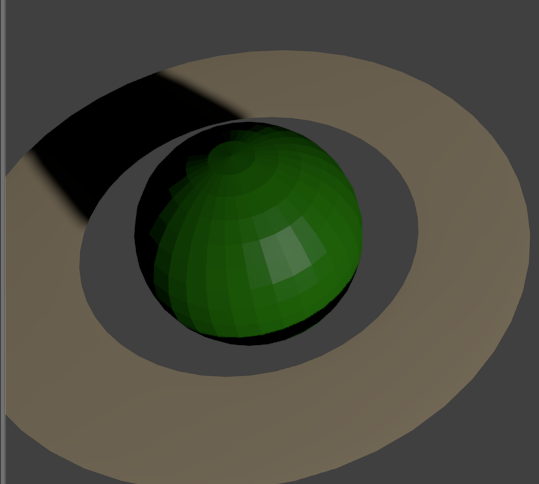 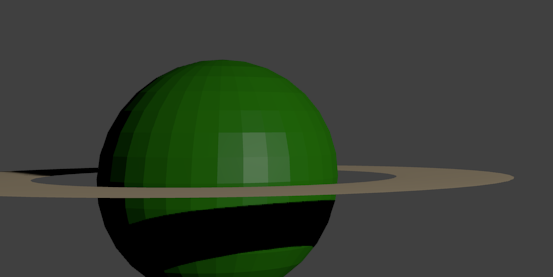 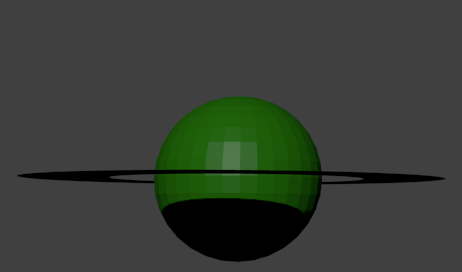 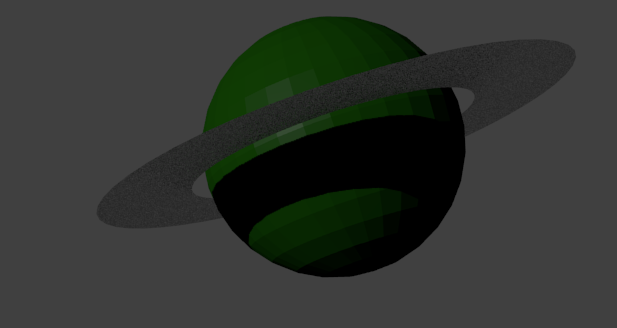 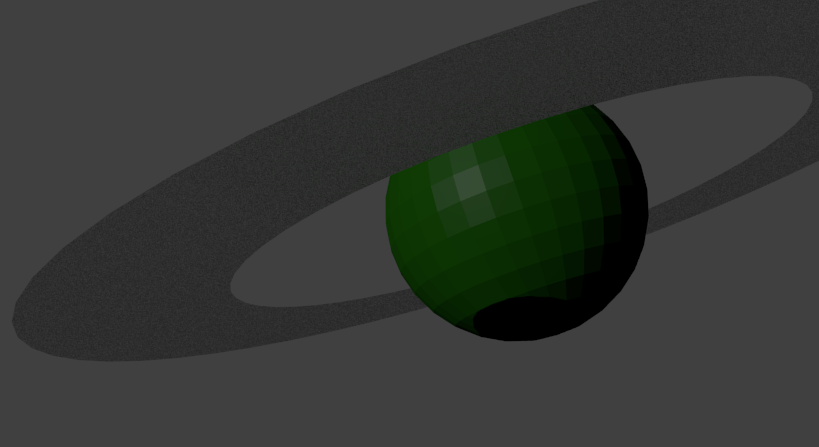 However, despite the fact that I goofed up, we can still see a few important points, that might not be entirely evident from the renders without the context.

During winter, the ring will cast a hemisphere on your portion of the world. This will block much of the sunlight putting you in a night time situation.

This will only be at particular latitudes.

The latitudes effect will shift as the season shifts. The area affected also becomes smaller.

As spring comes, the ring does not cast much of a shadow on the planet, anywhere.

I assume once I redo it with cycles, we will see it reflecting light onto the planet for the hemisphere that is experiencing summer.

I will edit once I have better orbital renders, and then again once I have the surface renders.

nBos AstroSynthesis. It is a full, scientifically accurate, star system simulator. Can do entire sectors of space. Allows you to generate planetary systems with full accurate orbits, and even animate their motion. It's going to be the closest thing to what you are looking for.

I searched 'earth with rings' on Google, and I got the following picture: You could put the rings in this picture into context on your planet, but you should be able to get a simple description from this.

Plus, it's all up to you to decide how your planet will look.

The picture is not 'scientifically accurate' at all. It's simply a picture to help represent my thoughts. (It is just a 'cool picture').

During sunset, the ring(s) would reflect light from the sunset, making them red, orange, yellow, pink, etc. The dark side of the rings would have a tint to them (depending on the sunrise/set colors), but it wouldn't be as noticeable or bold.

The shadow of the rings would be cast during the late morning, noon, and early afternoon depending on the hemisphere. The shadow would be similar to that of an eclipse, but it would be once per day.

The rings could rise and set. Realistically, the rings wouldn't rotate around the planet, as that would fling them out into empty space, but they do orbit around on their plane. I do think it would be more dramatic for the rings to rise/set, because then characters could refer to different times than noon, sunrise, or sunset. If the rings did not rotate, there would be a line from the arctic to the antarctic, on both sides of the planet, that would be in constant shadow of the rings. There would be a lot of tourism here, I would imagine, but I'm not writing the fantasy novel.

In higher latitudes, the rings would act similarly to the sun, where they would be visible all the time, day in, day out, for the entirety of the year.

Not the answer you're looking for? Browse other questions tagged planets worldbuilding-resources planetary-rings .

45
How do seasons work in a binary system (planet orbits one star, not both)?

13
Does a planet's axial tilt and seasonal progression affect a planetary-ring system, as seen from the planet surface?
6
Planetary rings: colour of the rings and sky
20
What would the sky look like in the SHADOW of planetary rings?
7
What would the Total Eclipse look like on a planet with rings?
2
Reality Check - Collision of a Moon prevented by turning it into a ring
2
How bright does this planet look from its neighboring planet?
9
Ringed Planet: The shadow's effect on fauna
8
How to navigate a ringed planet at night?