Building structures underwater: What could a giant crab do?

Okay, so I was working on making a sapient creature that lives underwater ended up with what was basically a two-hundred pound crab.

They have human level language skills, and I decided to justify this social skill by making them build structures to protect themselves and their young from predators. Over time, these structures would grow larger and branch into storehouses, temples, castles, and other specialized buildings. To teach new generations to build these things, or to keep building the things their progenitors started, this species learned complex language and writing. Basically, its the old tool-use-leads-to-civilizations idea, except with architecture instead of handheld tools.

The problem is what kinds of construction methods could a crab use underwater? All the methods of building I know of require some form of mortar or specially cut stone, neither of which seem possible for a underwater creature without fingers. Just making rock igloos wouldn't work either, as large predators could just knock them over.

Two important details: In addition to their crushing claws, this species has a "beard" of sensitive, octopus-like tentacles for more dexterous work, but are only little over a foot long. Secondly, they can go on land, but need to be submerged or sprayed with water in order to avoid drying out and risking health problems (other than their legs and arms, they have soft shells covered in skin).

They can comb beaches and travel a little inland for useful materials and farm undersea plants to turn into ropes, but they can't really use tools other than their claws and tentacle-beard. Metallurgy and building mortar are right out, but they can find and transport stone easily enough. I'm not sure if they would be able to mine, as that would quickly were down their claws.

Any ideas or suggestions?

You don't need mortar to build in stone. Check out dry stone construction for examples of things that a mere predator would never be able to knock over. (Waves are another matter - you'd be wanting to build below the depth of wave action).

They can wield a chisel to shape the stone (remember a lot of the things in the above article were built by people without metal tools), or maybe they live somewhere that the local rocks splits naturally into slabs. 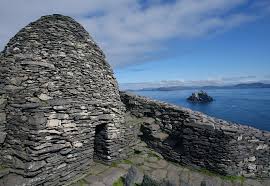 This is a monastic "beehive hut" on Skellig Michael, an island (More of a large rock, to be honest.) off the coast of Ireland. For over a millennium, it has withstood winds of over 20mph on average and the kind of waves that can, and do, claim lives.

So how did hermits build such resilient, yet crude-looking, structures? They used a technique called corbelling. Flattish stones are stacked on top of each other, gradually getting closer and closer to eachother, until the slabs meet in the middle. The gaps between the stones are so small that you couldn't fit a knife edge between them. Stupid tourists have thrown rocks at the hut and tried to kick the walls in, yet the structures remain 100% stable.

All the crabs really need to do is pick up stones, so I wouldn't put it past them to build structures like these.

Not the answer you're looking for? Browse other questions tagged biology society creature-design fantasy-races architecture .

11
What can a human offer an intelligent badger-like animal for trade?
7
Help me Explain this Alien's Traits
7
Scientific explanation for highly agressive infected
5
What evolved weapons could be used against graphene skin?
6
Feasibility of a species based on Yog Sothoth (HP Lovecraft lore)
1
What kind of building structures could a group of eleven people make whilst stranded on a tropical island?
7
Natural door-furniture for wombat-poop architecture
4
Human-level Vocalization through insect-like methods. Possible or absurd?
6
What kind of house would merfolk build?
2
Maxed out charisma