The World's a Jungle Again. Would Doldrums Blow the Global Air?

From 56 to 34 million years ago, Earth was so warm that we have found evidence of jungle plants inside the Arctic Circle. Nowadays, jungles are confined in or near the equator, and those latitudes are dominated by only one type of wind--the doldrums.

The doldrums is a colloquial expression derived from historical maritime usage, which refers to those parts of the Atlantic Ocean and the Pacific Ocean affected by a low-pressure area around the equator where the prevailing winds are calm. The doldrums are also noted for calm periods when the winds disappear altogether, trapping sailing ships for periods of days or weeks...Since this zone is where two trade winds meet, it is also called the Intertropical Convergence Zone. They roughly lie between latitudes 5° north and south.

So what formed this calm air?

In maritime usage, the low pressure characteristics of the doldrums are caused by the expanding atmosphere due to heating at the equator, which makes the air rise and travel north and south high in the atmosphere, until it subsides again in the horse latitudes. Some of that air returns to the doldrums through the trade winds. This process can lead to light or variable winds and more severe weather, in the form of squalls, thunderstorms, and hurricanes. The doldrums are also noted for calm periods when the winds disappear altogether, trapping sail-powered boats for periods of days or weeks.

In an alternate 21st century, Earth is as hot as it was during the Eocene, turning, for example, the frozen continent of Antarctica into the southernmost jungle, replacing penguins and skuas with grapes, figs, palms and citrus fruits. With such a hotter climate, would the oceans of the southern hemisphere still have the westerlies strong enough to be named Roaring Forties, Furious Fifties and Screaming Sixties? Or would those winds be demoted to doldrums?

TL;DR: Great question, we're not certain, but probably not much change

This is an awesome question, and one that we haven't solved completely. Climate dynamics is a huge field right now, because we do want to know exactly how winds can change with the global temperature increase. Our models aren't perfect, but we do have some good ideas about how general patterns are affected by temperature changes.

Let's talk a little bit about why we have the doldrums, westerlies, horse latitudes, etc. There are two main things to understand here; one is radiative forcing and the other is density-dependent turnover.

Radiative forcing: Radiative forcing is simply a measure of how much energy, in the form of heat, every square meter of the Earth receives. This is strongly dependent upon latitude and illustrated by two extreme cases. If the Sun is striking the Earth from directly above, then the energy received by the upper atmosphere is about 1,400 W/m$^2$ and the amount that reaches the Earth is about 1,000 W/m$^2$. At the poles, the Sun strikes the Earth obliquely, and in the extreme case not at all, corresponding to 0 W/m$^2$. In middling latitudes, the energy received is in between these two extremes.

Now, the Earth radiates away approximately the same amount of heat no matter where you are on the planet in the form of longwave radiation. Thus, the poles radiate more heat than they receive and act as a global heat sink, while the equator receives more heat than it radiates and acts as a global heat source. This is best shown in the diagram below: 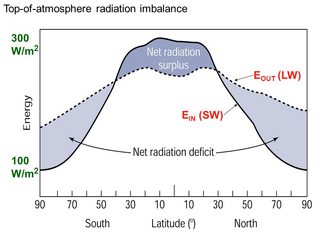 Thus, we have a net heat flow from the equator to the poles, and this causes wind - but in the opposite direction of the heat flow, because of density-dependent turnover.

Density-dependent turnover: This is a term that I think I made up, and is meant to juxtapose the more common term density stratification. It describes the way in which the atmosphere forms circulation cells, rather than forming layers of differing density. This turnover happens constantly because the air near the Earth is less dense than the air in the upper atmosphere. There are two reasons for this: one, the air near the surface is warmed by the Earth and two, the air near the surface is generally wetter than the air in the upper atmosphere. Counter-intuitively, wet air is less dense because the water molecules, H$_2$O, are lighter (molar mass 18) than the normal air (molar mass 32 for O$_2$, 28 for N$_2$) and the water displaces the heavier molecules.

Now that we know that hot, wet air rises,we can make some predictions about the atmospheric circulation. We expect a band of rising air at the equator because it's warm and wet, and we expect descending air near the poles once it's had a chance to cool off and dry out. However, we also need to consider the Coriolis force - the apparent deflection of moving particles from their path due to mumble mumble conservation of angular momentum mumble spherical planet. Essentially, particles in the northern hemisphere are deflected to the right and particles in the southern hemisphere are deflected to the left. This changes the north-south movement of air from the poles to the equator into the east-west movement of the westerlies and trade winds.

The trade winds behave exactly like we expect them to. They blow from north to south and are deflected to the right in the northern hemisphere, creating winds that drove trade from North Africa across to the Americas. The Westerlies, on the other hand, seem to blow backwards. They move from south to north and blow out of the west. This odd phenomenon happens because the air warmed and moistened by the equator doesn't actually stay hot and wet all the way to the poles. Rather, it's cool and dry by the time it's traveled about 30 degrees and starts sinking there. When it reaches the surface again, it splits and flows along the surface both south toward the equator and north. This northern branch is what we notice and call the westerlies. This whole scheme produces the idealized scenario shown below: 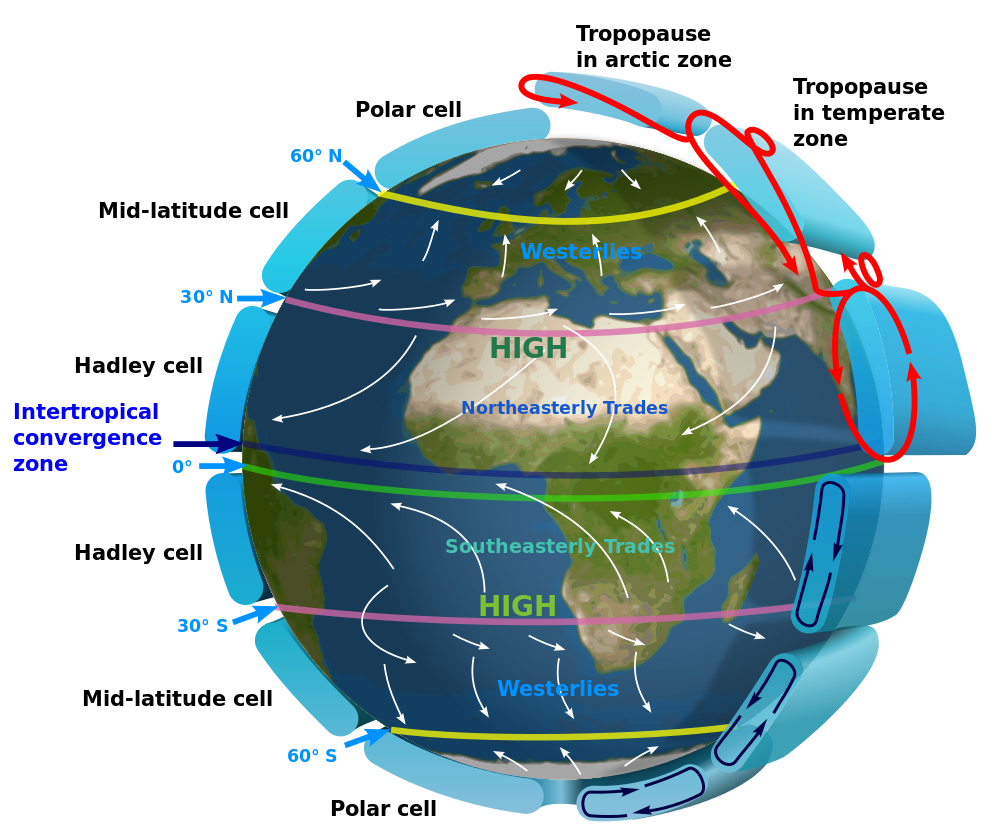 Why does this happen at 30 degrees north and not some other number? We don't know. We do know that it happens on Jupiter at about 15 degrees and doesn't happen at all on Mars, and our best theorists propose that it has to depend on the planet's rotation speed, size, and atmospheric composition. Here's a good link to the EarthScience stack with some math if you're curious.

So, that was a long-winded background into some of the theory, but the answer I'm going to give is much less satisfying. We don't really know how climate change will affect our atmospheric circulation. This paper proposes that a warmer planet will have wider tropical Hadley cells and smaller polar and Ferrell cells and argues that we can already see such changes, although such writing is hamstrung by the lack of a precise, universal definition of each cell's boundary. This paper proposes that the circulation breaks down significantly. A poorly sourced section in Wikipedia proposes that there was no thermal gradient in the Mesozoic at all and thus no circulation, while a different unsourced section argues that there was a new, desertlike belt at the equator. An article here says that the Hadley cells break down into eddies at high temperatures, including during the Eocene.

Altogether, it's unlikely that a few degrees change will significantly change the trade winds or the general circulation structure, and results will probably change linearly with temperature changes, so the Eocene will still be sailable. Your large-scale wind patterns are safe at the reality-check level!

So this is pretty complicated...
Wind is caused by differences in pressure. Pressure is effected by both temperature and moisture. The more moisture, the lower the pressure.

If the ice all melted and the pole got really warm again, the temperature differences between equator and pole would be lessened, and so the intense winds would probably slow down.

There would still be a difference between equator and pole, and half the year the pole would be in colder darkness.
The winds might be gentle during the summer, and stronger in the winter, but they shouldn't go away completely.

Not the answer you're looking for? Browse other questions tagged reality-check earth-like climate weather alternate-earth .

7
What was the weather like in the Eocene?
6
What would happen to the climate if Earth's sea-levels rose 2000m?
2
The World's a Jungle Again. How Many Species Would Crowd the Continents?

7
How would a large arctic mountain range affect the weather?
1
Where would wind blow away the smoke from a giant fire?
3
Weather Impacted By Extreme Magical Effect (Heat)
1
What might be a plausible explanation for the drastic lowering of global temperatures?
5
Could the Amazon's jungle exist in a continent without the Andes mountain chain?
3
Help with Pressure, Winds, Precipitation and Climate Zone
5
What effect would a perpetual cold zone in the tropics have on the global climate?