Would a humanoid insect species even lift?

Let us imagine a human-sized mantis (1.7m tall, 70kg / 5'8", 154 lbs.), but with the forelegs modified to have a shape closer to human arms. So each arm would have two main segments, and end up in a multi-segmented, multi-fingered, grasping-capable hand.

In order to make this creature feasible without violating the square-cube law, let us imagine that it evolved a closed circulatory system and a pair of huge, highly vascularized and alveolated lungs, capable of expanding and contracting just like ours. Add a diaphragm, just because. The mantisman would have tracheas only in the abdomen, and those tracheas would lead into those lungs. Its metabolism and phisiology would be on par with ours.

The point where such a creature differs from us is the skeleton. This creature's skeleton is its external chitin layer. The muscles are inside and attach to their skeleton in a different way, compared to us. 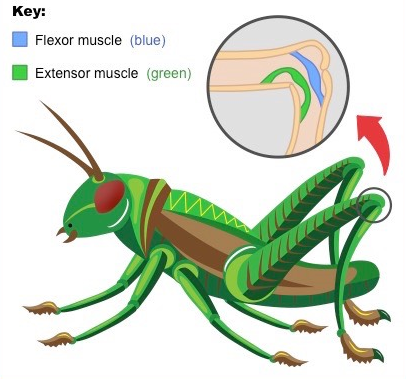 I know, not a mantis, but it's the best image showing insect muscles that I could find.

What I would like to know is how this creature's musculature would compare to ours regarding strength, more specifically lifting and carrying weight. Other aspects of strength, such as arm-wrestling or doing pull ups would be appreciated, but are not needed for this question.

Very general answer, because you do not seem to care about scaling a mantis, but rather seem interested in something human-sized that looks like a mantis and has an exoskeleton (man-tis):

An explanation of the body stresses that a scaled up insect would have to deal with is here under Session 5 Giant Ants Attack! - http://fathom.lib.uchicago.edu/2/21701757/

It talks about the mechanical stresses on the exoskeleton to support the weight of the larger insect, and the joint structure of insects. A key paragraph about the joints from the above article -

One estimate suggests that mammalian joints are called on to withstand forces as much as 100 times the animal's body weight during normal locomotion. (In humans, the peak forces on the knee during running can be 15 times body weight.) Arthropods, even though they have more legs than mammals, have it even worse; their joints may see forces as great as 3,000 times body weight, 30 times higher than mammals. Because joint contact areas are much lower in arthropods than vertebrates, the difference in stresses must be much greater. Now we come to the heart of the matter. As you scale up an ant, body mass must increase faster than joint surface area--indeed, the stress on the joint should increase in direct proportion to size.

The preceding paragraphs explain why the arthropod joint is required to withstand the higher forces.

I know that some insects and arachnids are capable of feats of strength, such as ants and spiders being able to lift many times their own weight. What I don't know is if that would scale up with size, nor if the reason they are able to do so is directly related to their muscle arrangement.

What reliably scales with size is power output of the muscles. Power is produced chemically and is subject to several hard constraints. ATP and Pcr stores in the muscle limit peak power; the cardiovascular system's oxygen throughput limits sustained power.

How this power is distributed between force and speed will depend on the creature's exact physiology. I've seen feats of nature impressive enough to lose belief in evolutionary impossibility. The outward effects of adaptation for high strength/low speed would be thick short limbs and vice versa.

The mammalian endoskeleton is generally more favorable for high speed and high instantaneous force than an exoskeleton. The joints are compact, the muscle is well-cooled and has a lot of room to change shape. In comparison, an exoskeleton is like an aircraft fuselage, it's good at distributed static loads, but not at strong shocks and high acceleration. Force on the skeleton is determined largely by acceleration, so running fast would be riskier for the mantis than a mammal. Carrying weight, however, would be a lot more efficient, with most loads going through the exoskeleton.

So the human-sized mantis would likely have good strength and excellent ability to carry loads, but not be as good as a mammal at jumping and running. Its sustained strength would be determined by its cardiovascular system. To make good use of its muscle, the mantis will need to circulate at least twice more blood, as both a coolant and an energy source.

In the gym, it's going to be very good at most weight exercises, doing dozens of reps (given good circulation). But not as good at complex full-body exercises, because of the system's limited instantaneous capacity. They won't be good at throwing punches, as that takes explosive strength and speed, but will be good at holding force.

Carrying as much as 5x own weight over long distances, but not very fast, should be quite doable. Perhaps 10x if someone else puts it on their back. It takes a lot less muscle effort to keep their exoskeleton straight than it does for a flexible bipedal human.

Arm-wrestling between one another will be viable, but more like how non-wrestlers imagine it - arm vs arm, slowly forcing the opponent down. A human athlete puts their body's force on the opponent's arm in one strong move; it's forceful and would be dangerous. Due to exoskeleton limitations, the mantis population will likely be a lot more uniform between athletes and non-athletes than humans. So they could be able to arm-wrestle amateurs, but at risk of permanent injury if they come against an athlete.

What I would like to know is how this creature's musculature would compare to ours regarding strength, more specifically lifting and carrying weight.

Yes, it would be comparable.

So, let's look at the square-cube law another way: the larger something is, the slower it is in all areas relative to its size. It's metabolism and reaction times slow down, its top speed slows down, etc. It also lifts less mass relative to its own body weight.

So scaling a mantis up to human size would result in a mantis with human strength, human speed, human reflexes, and so on. Keep in mind that the average human weighs 45 - 50 kg, and most cannot lift more than half their bodyweight without specifically training in a gym to do so. Even lifting 20 kg (50 lbs for us Americans) repeatedly would be a struggle for some.

You might be interested in these videos. They'll point out some of the problems with increasing the size of an insect without allowing for how scale determines the way an organism interacts with its environment and changes its metabolism, respectively.

No, this does not scale up, particularly if the mantisman has the same metabolism as a human. In a certain sense, metabolism is a way of talking about how much energy an organism is capable of producing. Because smaller organisms have faster metabolisms, they produce the energy necessary to lift many times their own mass. They also have a higher surface area to mass ratio, providing more surface area for interior muscles to connect to and generate force from.

In contrast, a mantisman with human metabolism is going to have much less energy to lift with, and a lower surface area to mass ratio that reduces the amount of area the muscles can use.

The issue with human-sized insects, or the Attack of the 50ft Whatever, is as mentioned in the comments, the Square/Cube law.

Specifically, if you double the dimensions of an object, it's mass increases by eight times, however muscle strength only increases by the cross-dimension surface area, which will increase by 4 times. Thus, a higher proportion of the creature's strength must be dedicated to moving itself, leaving less available for other tasks, like lifting food to your mouth.

The reason why muscles only increase by a factor of two, is because we care about muscle strands. It doesn't matter how long the strand is, what matters is how many there are. Thus making your arm twice as long just makes each strand double in length. It's only when you also increase it in the other two dimensions does you muscle gain power, as there is now four times as many muscle strands.

The other issue with giant insects is that they don't have lungs, but instead use Spiracles, but that's not the focus of your question.

39
Dietary Requirements of Giant Spiders
5
How do I kill a giant mantis without using fire?
6
What would be a propitious environment in which centaurs could evolve?
4
Would Anthropomorphic Bugs and Crustaceans Need Armor?
4
Plausible homeworld for an insectoid-ish alien species?

7
Help me Explain this Alien's Traits
7
Humanoid based on Octopus: Flexibility and organ protection
8
Creating a scientifically semi-valid super-soldier, part 5: Heart and circulatory system
4
Modifying muscles to be more bullet resistant without affecting strength?
4
Creating a Worm For Urban Survival
5
Could this idea for an anatomically functional merfolk "sound" plausible?
3
Is it medically possible to give someone super strength with gene editing?
4
Could this centaur anatomy work and fit together?
1
Human precursors design powered armor for invertebratre Cephalopod slaves that have lungs too, up-right or octopus-form?