Exploring the idea of "living" matter, (possibly non-carbon based if necessary), decomposing by bacteria (or similar) into sugar.

In our world, sugars are held quite valuable by living systems, so this would be like throwing away fuel.

The organism should be able to excrete any form of sugar that is digestible to humans.

Aphids excrete sugar. Maybe your creatures can do the same. 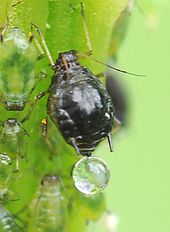 Aphids secrete "honeydew": sugar rich secretions that fall onto your car and make a sticky mess. This is good stuff with caloric value for humans and ants and other things too. https://en.wikipedia.org/wiki/Honeydew_(secretion)

Why would the aphids forgo energy? It is energy for them as well. It is because there is so much. The aphids need to process a lot of the protein-poor sap to get enough protein for themselves. With that sap is more sugar than they can use, which makes it waste to be excreted.

For your bacteria the issue needs to be carbon vs nitrogen. Carbon is energy and nitrogen is required for anabolic synthesis of tissues. If you have an excess of carbon you need to process it and get rid of it to obtain the associated nitrogen. Carbon-rich, nitrogen-poor environments are common on Earth and elsewhere. Outside of Earth, one circumstance where available nitrogen is bound up in a surfeit of carbon is tholins:

Tholins (after the Greek θολός (tholós) "hazy" or "muddy"; from the ancient Greek word meaning "sepia ink") are a wide variety of organic compounds formed by solar ultraviolet irradiation or cosmic rays from simple carbon-containing compounds such as carbon dioxide (CO2), methane (CH4) or ethane (C2H6), often in combination with nitrogen (N2). Tholins do not form naturally on modern-day Earth, but they are found in great abundance on the surface of icy bodies in the outer Solar System, and as reddish aerosols in the atmosphere of outer Solar System planets and moons.

Wave your hands now! Your tholin-dwelling bacteria extract their needed nitrogen from the excess of carbon by partly oxidizing the carbon, substituting oxygen for nitrogen. Freed from its carbon cage, the nitrogen is available to the bacteria for protein synthesis. The partly oxidized carbon is left as a nitrogenless but delicious waste product.

Aspergillus oryzae also known as koji is a mold. It is capable of breaking starches and other polysaccarides into sugar. It does this for its own benefit, but actually produces more sugar than it can use itself.

Sugar however is a preservative and an antibiotic. If you can produce excess sugar, and you have evolved to tolerate elevated sugar levels you have an advantage over other organisms that might want to use a food source.

Koji will enter into a symbiotic relationship with yeast, the koji will produce sugar, the yeast will ferment the sugar into alcohol. Yeast and koji are tolerant of levels of sugar and alcohol that would be toxic for other microorganisms, so the koji and the yeast, united, can utilise food sources that they could not exploit alone.

Aphids "are small sap-sucking insects and members of the superfamily Aphidoidea" (Wikipedia). They live on plants and feed passively by tapping the elaborated sap, which is basically a solution of sugars in water, flowing trough the plant host. They don't use all the sap they take, and excrete the excess in the form of honeydew, which is a concentrated solution of sugar.

Some species of ants farm aphids; the ants take care of the aphids and protect them, and feed on the "honeydew the aphids release from the terminations of their alimentary canals" (Wikipedia). 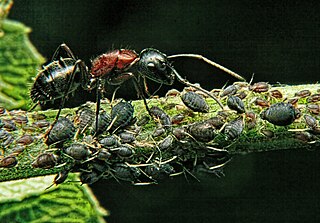 From an energy perspective, sugar is a poor material to excrete as a waste material because it is high energy density. It is a good energy store.

You would have to hypothesize a biochemisty that uses a chemical that has a higher energy density than sugar, but then breaks down into sugar as the energy is extracted and excreted as waste. This would likely include an environment so rich in high-energy density material that excreting sugar as waste would have been evolutionary viable.

Maybe Gasoline could be a naturally occurring and highly abundant material. This would require a chemist to verify if its realistic.

Perhaps the single-celled organisms that evolved to become multi-celled beings managed to harness nuclear radiation and therefore organic chemicals just gunk up their 'digestive' system. Basically they consume food for the amino acids and maybe lipids, but the carbohydrates are just excreted as waste. Good luck explaining how the cells would be protected from the radiation though, that would be an entirely different WB question.

Look up Aspergillus oryzae. It is a member of a very abundant group of molds Aspergillus and this microorganism actually creates simple sugars from complex carbohydrates. So I think it works well with what you are looking for. It is not a bacteria, but I guess the gene clusters could be transferred from these fungal organisms to bacteria, if needed. As far as "non carbon based" goes, however, I think it is not compatible with the very nature of what sugars are! (basically carbon chains).

The actual fermentation is done, of course, with a strain of the classical wine yeast saccharomyces that use those sugars and converts them to alcohol. Yeast can not use complex sugars to produce alcohol, which means that Aspergillus oryzae produce true simple sugars.

Considering that saké are usually very high in alcohol (commonly 12-15% abv) and that fermentation is not sustainable above 15% abv (for most yeast), it means that they have access to large amounts of fermentable sugars generated during the koji "fermentation".

So these Aspergillus guys use complex carbohydrates as source of food (like starch of cellulose) and output simple sugars. They are also used for the preparation of certain foods.

Many bacteria do excrete sugars in the form of exopolysaccharides in biofilms, so bacteria do excrete sugar molecues in the wild. Maybe combining this with the raffinose comment above, you could imagine a world where bacteria can manufacture both D and L glucose but organisms can't digest D glucose, so that bacterial biofilms on this world contain a lot of D glucose (or a polysaccharide the easily breaks down into D glucose).

Edit: this answer is actually better, but I believe mine still provides usable solution.

There is no sense to discard sugar

Not with biology and biochemistry as we know it. Sugar is readily available energy source. metabolic pathways to extract that energy, with or without use oxygen, are really old and relatively short.

Discarding energy makes no evolutionary sense. Evolution generally minimizes energy spent. Gathering energy just to throw it away gives no benefit, using it for growth and procreation will always be preferred.

The only reason do "discard" sugar that makes sense, is to store it for future use. Bees do exactly this. Carrots and potatoes do similar thing (store internally). There is no reason for bacteria / yeast / algae biofilms and other colonies not to evolve this trait, if food is available for them for some time, and hunger is regular. If conditions change and food will always be plentiful, they will store it, and store, and store, and never use it.

This will not be stable. Evolution will get rid of this trait, probably rather soon. But in the narrow window between environmental change and evolution catch-up, you can have your microorganisms appear to work as you want them to.

Composition of microorganisms and their food

Actually, it will be really similar to composition of microorganisms now, and their food. Metabolic pathways to create glucose exists. There just need to be a reason for them to be used in this specific way.

Why not photsynthetic algae or plankton?

Algae and plankton use UV radiation while capturing CO2 from the atmosphere to bind and create sugar and some more complex variants of it to use as food. If in your world there has been a recent raise in CO2 concentration(would also rise water acidity) or a rise on radiation levels, these organisms could be on a superreproductive/high activity phase.

This would mean that they would be constantly producing more of those sugars than they need while also multiplicating rapidly. The high concentration of sugar inside them would mean that a part of it would end up filtering out into the environment (these beings usually live in water, so you would end up with sugary water). If it is not released at enough speed, some of these beings would/could end up dying with sugar intoxication. After death, the membrane of these beings usually ruptures, releasing the sugar and other chemicals.

This would even allow you to have people carrying containers of water mixed with these organisms to have them produce sustenance when needed by exposing them to the air and sun.

Not the answer you're looking for? Browse other questions tagged science-based microorganisms .

13
How could nanobots in the body be discovered via a routine blood/medical test?
3
What are the limitations of apple-based weapons and construction?
3
Life-speed of non-water alien life (much slower or much faster than on Earth)?
14
Could just a brilliant idea advance science by decades, or even centuries?
4
How does composition change if you extend an Earthlike atmosphere 50km below sea level?
4
can bacteria or microorganisms produce or excrete blood?
5
Where to begin when designing functioning alternative biochemistry for alien organisms in non-earthlike conditions?
13
Could an Earth-like world use airships as heavy cargo haulers?