How long could a modern oil tanker last without maintenance?

After the apocalypse, In Baja California, off the coast of Tijuana, there is the wreckage of the oil tanker, Exxon-Cazador, which was run aground and abandoned by its crew while the first bombs started hitting their targets. It’s cargo, oil, was already delivered, so no oil spill. The local tribal communities in San Diego and Tijuana see it as sort of a quasi-religious figure. They think it was a sea monster that burned up the world during the apocalypse, and when they fish, they give the second largest to the “Sea Beast” and pray to it for good weather. Sometimes, the tribes take scavenged transistors and radio parts and die from ingesting them. Anyway, the Sea Beast remains unmaintained, so how long could the Sea Beast actually remain before being unrecognizable or at the bottom of the sea?

The examples in other answers of modern steel ships deteriorating within a decade or so are not encouraging for your plot. And it is because "They don't make them like they (occasionally) used to".

The SS Great Britain, launched in 1843, was one of the most historic ships ever built. It's great size - the largest known ship at that time, metal hull, and screw propeller made it the model and template for modern ships.

Great Britain ran aground on Drundrum Bay, North Ireland in 1846, but was re floated after a year. She carried passengers to and from Australia from 1852 to 1881, and then was converted into a sailing coal carrier. Damage in 1886 caused her to be sold as a floating coal bunker in the Falklands Islands. In 1937, after 51 years of low maintenance, she was towed to Sparrow Cove, scuttled so she would never float agin, and abandoned. Some of her metal was salvaged to repair battle damage to HMS Exeter in WWII.

In 1970, after being partially submerged in Sparrow Cove for 33 years, Great Britain was re floated and taken back to Great Britain and restored as a museum ship.

Yes, they don't build ships like they sometimes used to. For economic reasons modern ships aren't built as sturdy as some old time ships were.

The S.S. Atlantus was one of twelve concrete ships built in the World War One period, launched in 1918. In 1926 it ran around at Sunset Beach, Cape May Point, New Jersey.

It slowly crumbled over many decades until today only small parts are above the water at high tide.

Because the Atlantus was built out of five inch thick concrete it withstood the weather, salt water, and waves for decades longer than most steel ships would, but was also so heavy and slow it was impractical as a ship. Thus it would be unlikely for a ship, especially a giant oil tanker, built like the Atlantus to be available in some near future apocalypse.

A second fleet of 24 concrete ships were built during World War II; with improved concrete technology they were lighter and stronger than the earlier ones.

With maintenance, concrete ships can last for much longer than the Atlantus did. Nine of the WWII ships and one of the WWI ships are still afloat, though hulks, serving as breakwaters at Powell River, British Columbia. But an abandoned ship wouldn't get any maintenance after World War Three.

So for your story to work you should have a fictional development of super strong super sturdy ships that are designed to last for centuries or millennia even without maintenance, and have them economical to build and use.

Or possibly you might have a tsunami lift the ship and deposit it on the shore and then recede, leaving the ship high and dry. That is not good for a ship but at least most modern ships are flat bottomed and it will be safe from salt water and from waves, at least for decades, centuries, or millennia until the next tsunami strikes. Many boats and ships have been left inland by tsunamis, but I don't know if any tsunami has ever been strong enough to carry and deposit a large oil tanker onto dry land.

If you search for images of "stranded boats in Aral Sea" you can see that some of them seem to still be in good condition after a few decades of being high and dry.

You could have a ship built out of bronze, aluminum, or some other metal that might not rust or corrode as fast as Iron or steel. Bronze and aluminum and other metals are in some ways equal to, and in other ways superior to, iron and steel. Of course they are also inferior to steel in some ways, including price.

Maybe the ship could be built with framework and plates that have steel in the inner layer and other, rust resistant, metals as the outer layer. Of course some metal combinations will actually corrode each other where they touch so the metals used would have to be carefully selected to avoid that.

And of course a large ship could be built of some new synthetic material that has various good properties including being resistant to damage for a long time.

I think it would be fair to say that your local tribe might get a good decade or so out of their mighty god of steel and oil. After that, the ship will surely begin to collapse, and they may not see that as such a mighty god after all. Certainly by the second generation, kids will be laughing at their grandfathers for worshipping a lump of rust!

Let's take a look at the wreck of the SS America, which is probably the most well documented wreck online. She ran aground in 1994 in relatively good condition, being towed for restoration. 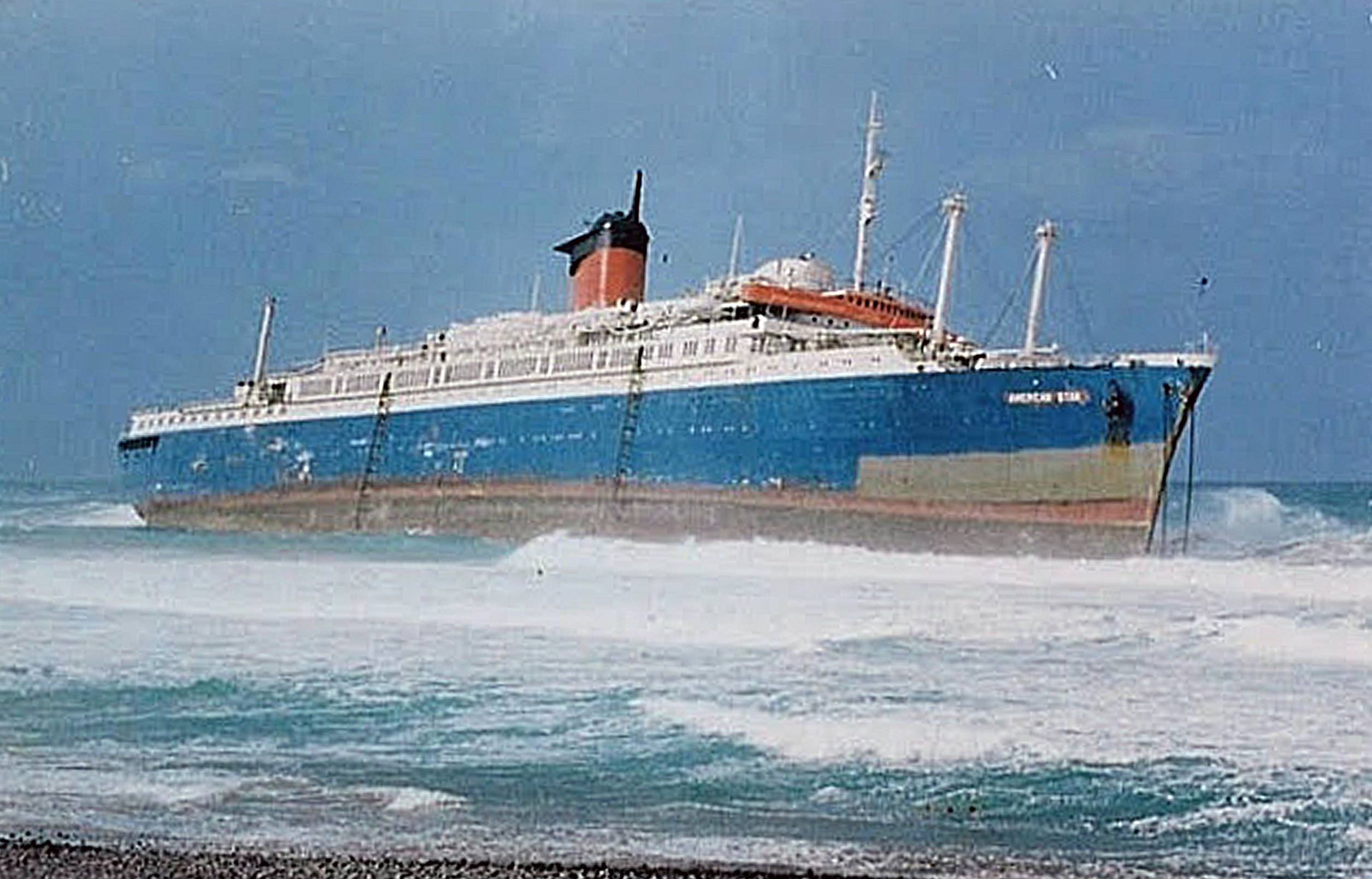 By 2004, only the prow and bridge were left, and they were in poor shape: 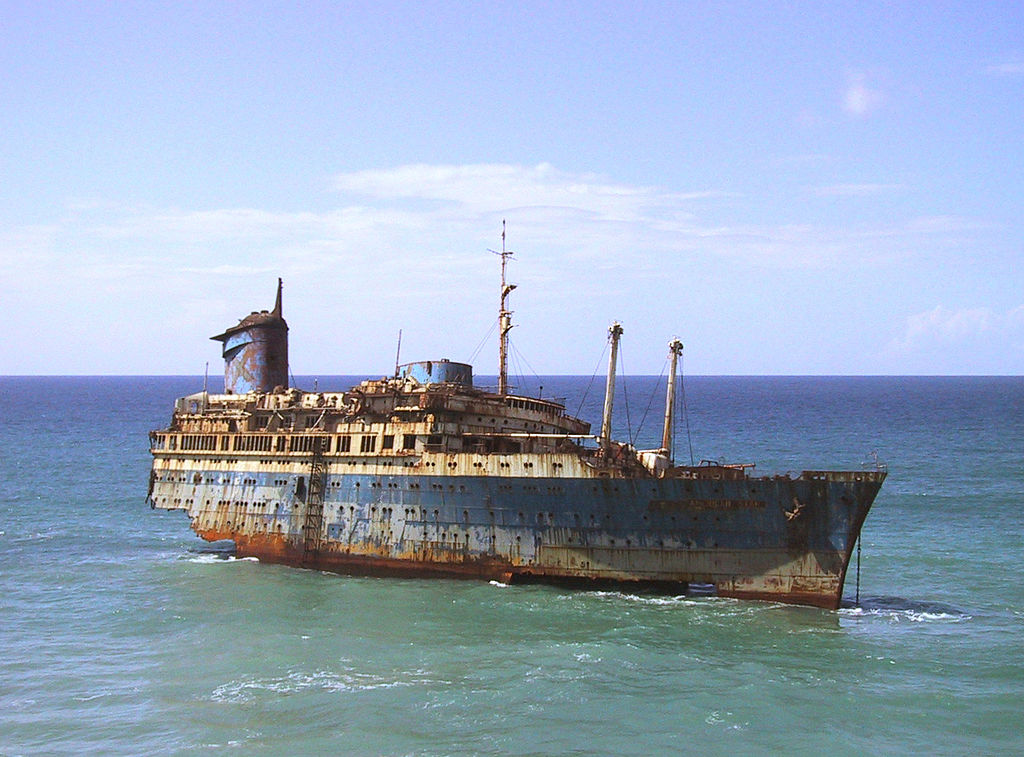 By 2011, she had almost completely deteriorated: 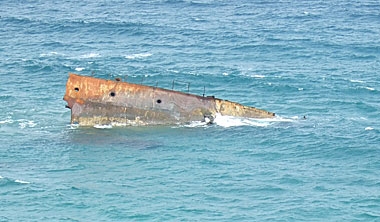 As of earlier this year, there is not much left of her: 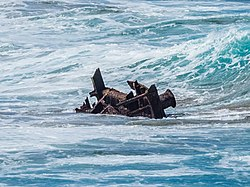 You have said it was intentionally run aground - so the concept of disappearing to the bottom of the sea is a bit nonrelevant to your question I think. This leaves primarily weather as any destructive force. The only other mechanism for damage would come from some form of creature, with the most likely being human.

Because the weather in that area very rarely is extreme, this is likely to last for a very long time. Potentially decades. It is very conceivable this would become a quasi religious location.

The weather is only very rarely extreme, because of a cold ocean current that flows in that region. This means that any Hurricanes/ cyclones that head in for landfall there, lose a great deal of energy right before landfall. Some information about the climate of San Diego

At some point you are likely to have an oil spill coming from it - once that begins, it will be devastating to any fishing based economy in the entire region. Possibly for centuries from that point on. Some information about the Exxon Valdez Oil SPill and it's effects

The greatest risk to the integrity of the fuels tanks will come from human damage. Even a quasi Religious site can have people being people, trying to take artifacts for example... Or possibly a heretic of some kind, or another group who recognise it for what it is and attempt to remove the oil for their own use.

If you look at existing wrecks, salt and rust will eat them away

Not the answer you're looking for? Browse other questions tagged ships .

11
How long would a carrier group survive unattended anchored just off shore
18
How long could an operational Virginia-class sub survive in the Jurassic sea?
13
How could an outrigger or catamaran ship be modified for age of sail naval combat?
10
How quickly could a Norse longboat get from Denmark to "Vinland" (Newfoundland) and beyond?
3
How would ships develop in a world without Gunpowder/Cannons
37
How long could a late WW2-era battleship last under sustained ship of the line cannon fire?
28
How could medieval ships protect themselves from giant mermaids?
3
How large could an oceangoing vessel be and still be able to move?
5
How much distance could chained ferryboats traverse?