This question is connected to: Fire Resistant Flora

I've been pondering a short story concept where a scientific expedition discovered a planet with a huge amount of both free hydrogen and oxygen in the atmosphere.

This is caused by an unobtanium crystal widespread on the surface of the planet which acts as a catalyst, splitting water into hydrogen and oxygen and absorbing heat and sunlight to do so. (That heat then gets released back into the environment when the gases burn).

The resulting atmosphere is highly flammable and as a result flash-fires are a common occurrence. These involve a burst of heat and flame and even mild explosions but are also over very quickly. Very fast-moving flame fronts sweep through the atmosphere, averaging at least one a day, but passing in a matter of moments. Water falls out of the sky in the aftermath of the flash fire and is then split back into oxygen and hydrogen once more by the unobtanium crystals.

Assuming animal life has evolved to survive in these conditions what adaptions could they make to survive?

In a flash burn, assuming that the heat isn't super intense most of the animals (and plants) would have some kind of heat reflective coating. Most of the IR band would be reflected. Humans can take some pretty large fire balls without burning up, just losing hair with low burns. If it's short lived burn then the protection doesn't need to be that much.

Woodland fire fighters carry little aluminum shelters which can protect someone for up to 20 minutes or so. These are very hot and intense fires. The biggest thing it does is protect the lungs by keeping out super heated air and trapping oxygen inside.

Now if you only have a few seconds to deal with, an innate reaction to stop breathing and close your eyes, would go a long way. Having tough hide or a hairless body with reflective particles in the skin would also do much of the work. Having fire resistant hair could also be a way to go, kind of like insulation covering the body.

A fire/blast resistant epidermis would be enough.

An animal sensing a blast would huddle down protecting the more vulnerable parts, hold their breath and wait it out. Afterwards they could stop-drop-an-roll to put out the embers in the fur or throw dust on themselves to put them out.

However the biggest change would be the possibility for animals to stop eating for energy. They would still need to eat to grow (and heal) but not for energy. But instead use internal oxidation of the hydrogen in the air they breath (same would go for the plants).

All in all a fauna with a very low carbon foot-print.

You will have to come up with several solutions, depending on the size and environment of the animals.
You already received some answers, but here are more heat adaptations:

The Pompei worm survives in water of 80 °C because of (among other things) a centimetre thick thermal blanket across its back that is composed of colonies of filamentous bacteria. This is under water, but I can imagine such a symbiotic relationship on land as well: as long as the bacteria can regrow, losing them partially wouldn't be a big problem. This is one possible solution for little critters.

The group of Deinococcus and Thermus bacteria do not only contain extremely radiation-resistant species, but some like Thermus aquaticus can resist up to 80 °C because of heat-resistant enzymes throughout their body. You can 'have' those enzymes in some of your higher order fauna as well ;-)

Tardigrades (water bears) also have no issue warming up for 1 hour to 80 °C. Milnesium tardigradum (Milnesidae) showed survival of >90% after exposure to 100 °C. I don't know their mechanism, but you can probably find it.

I suggest you also Google for 'fires animal survival'.

Since hydrogen is light I think for the most part these hydrogen burns are going to be high in the sky and burn harmlessly. With about as much effect minus radiation as this nuke exploding high in the sky did. 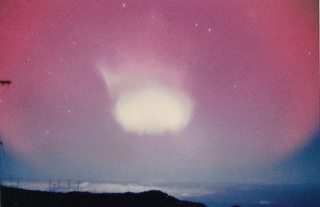 However occasionally the burns would be close to the ground because of the weather phenomenon of inversion layers. Almost all areas of the world get inversion layers but the inversion layers are of differing strength and frequency. Some inversions just last a few hours in the morning at certain times of the year, some inversions last for days weeks or months. For example here on earth every decade or so we are treated to a scene like this at The Grand Canyon. 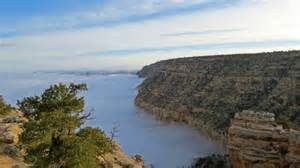 In the north west part of Utah roughly in the old lake bed of Bonneville Lake, most winters a large and persistent inversion layer develops, that might last from December until sometime in march. Some years it does not develop for long some years it comes and locks in a low layer of cold air for months. 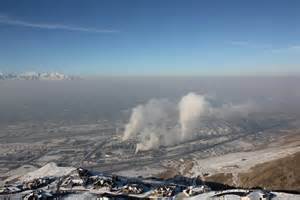 Frequency and size of the burns would vary depending on topography and weather. Weather always varies.

Taking the premise that natural disasters are basic to evolution I think you would find that the plant and animal life on this planet would be much more diverse then it is here on earth. Evolution is about survival of the fittest. All living things would have all the variables that we have here on earth to evolve plus the added variable of the hydrogen burns.

There are lots of plants that survive large disruptive events like explosions, avalanche, flood and fire. Some ecosystems depend on these events, especially in the case of wild fires, to thrive.

Quaking aspen occurs on a wide variety of sites. It grows on moist uplands, dry mountainsides, high plateaus, mesas, avalanche chutes, talus, parklands, gentle slopes near valley bottoms, alluvial terraces, and along watercourses. It is most common at elevations between 6,000 and 10,000 feet. Most of the reproduction of Aspen is by root-sprouting, many trees in a grove being connected together by a common root system in what are referred to as "clones." Because the trees are in clones, they are genetically identical. This species is not shade tolerant, and entire clones can be lost due to the encroachment of spruce and fir into this type of ecosystem. Aspen is dependent on fire, clear cutting, or other "clearing" disturbance to keep stands open, free of conifers, and reproducing from suckers.

Aspen trees would thrive and dominate an eco system that was blown away every few years or decades.

Consider the Yellowstone fires and the adaptation of the lodgepole pine tree.

The predominant tree in Yellowstone, the lodgepole pine, fared poorly from the fires, except in areas where the heat and flames were very mild. The lodgepole pine is serotinous and often produces pine cones that remain closed and will not disperse seeds unless subjected to fire.

The Mysterious Tunguska Explosion, 1908, huge event that was a giant explosion that leveled 80 million trees. Described as a giant fireball in the sky. 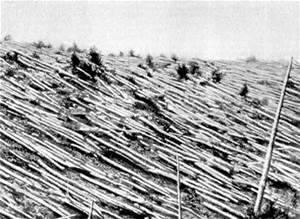 Look at this picture and you will see the plant life that will dominate, the decedents of the large tree on the right of the picture may inherit what ever traits helped this tree remain standing. There are bushes in the picture that appear to have survived the event unscathed. You can imagine that there are grasses and smaller plants that also survived but not really visible in the picture. There is an ecosystem here and the plants that survived will pass on the traits in there genetic that helped them survive. If you repeat the event every few decades or so a whole diverse eco system will develop that needs the explosion like the lodgepole pine, or thrives on the devastation of the explosion like the quaking aspen. Species that were stifled by the shade of the larger trees will also thrive in the new ecosystem.

Both your flora and fauna will have to be based on some very exotic biology, because it could not contain any water. Basic chemistry of life would have to be very different, so not sure how you can even define plants. Plants (defined as life form using solar energy) are not necessary at your planet, because crystals of unobtainium make the work plants do on Earth (capture sun energy to and provide sustenance to other life forms).

Animals (defined as lifeform which does NOT use solar energy directly) can get energy not by consuming plants and other animals, but (somehow) oxidize free hydrogen and oxygen to get energy. Probably they would be some electromagnetic fields or something - nothing based on biochemistry as we know it. Maybe metallic lifeform designed by alien race. On nanobots, powered by unobtanium crystals.

Why life biochemistry cannot contain any water? Because life starts small. Any small lifeform (original bacteria, archea) would be vulnerable to damage by internal unobtainium.

Another problem your animals would have is changes of air pressure associated with fire flash. Oxygen and hydrogen would get burned to make water, which has less volume. So pressure of gasses inside body will increase, creating damage. Fire could even enter inside cavities (where both O2 and H2 are present). Fire damage could be rather intense, depending on the concentration of flammable gasses.

Yet another problem would be hydrogen escaping the atmosphere. Free hydrogen in upper atmosphere would be swept away by solar wind. In few millions years, water could be converted to oxygen (with hydrogen escaping). Then, with frequent hydrogen fires, and over-abundant oxygen, other things could go up in the flames too. Things like metallic outer shells mentioned in other answers.

Maybe the flora and fauna can develop some kind of fire resistant gel.

These kind of gel can protect the skin from high temperature for some time. They are used in stunts.

Not the answer you're looking for? Browse other questions tagged planets fauna fire or ask your own question.

15
Fire Resistant Flora
2
How could mammals evolve to resist damage from fire?

15
Fire Resistant Flora
2
Shake 'n bake colonies
28
Could burning debris keep burning in space?
1
Would it be possible to have three planets merge but still allow some life survive?
12
How to modify bee physiology to be able to produce firehoney given nectar that is (magically) flammable?
6
Forging with geothermal heat: Possible alternative to fire in alien species' technological progression?
26
Why wouldn't dragon-hide make me fire-resistant?
10
How could a breathable ultra-high pressure atmosphere form?
5
Reality check: A fire in a giant cave with two entrances. Where do the byproducts go?