How do underwater cities (with aquatic human-like citizens) handle sewage? What type of technology would be possible to use underwater in order to take care of the mess?

In treating sewage, you're going to have two distinct problems; number 1 and number 2

Proper treatment will leave you with 'gray' water and sludge. The gray water is not suitable for drinking (ick), but can be used to do things like irrigation. Your number 2 problem is the sludge, and that's more problematical. Once it's dried out it can be burned, it can be used as compost/fertilizer, it can be used to produce methane. The main problems with the sludge are that it generally has to be dried out before being used in one of these ways, and that takes time or a source of heat (preferably both).

If they're not concerned about the ocean around them, they can just pipe the sewage out into the ocean itself and let dilution solve the problem. Alternatively they can run a pipe to the surface and drop the sewage on the land, much like humans used to do to the ocean.

If they don't want to go with that idea, a society with a similar tech level to our own will have options for sewage treatment. It's not a very simple process, but it's definitely better than spraying the area you live in with feces. Current technology for us can make use of various forms of algae to chew through undesirable bits and produce gray water.

You don't necessarily need high tech to treat sewage, though. If you can construct an artificial wetland, that will act as a phenomenal filter for the sewage. You'll still have the problem of sludge, but probably not as much, as some of it will go into helping the plants in the wetland grow. 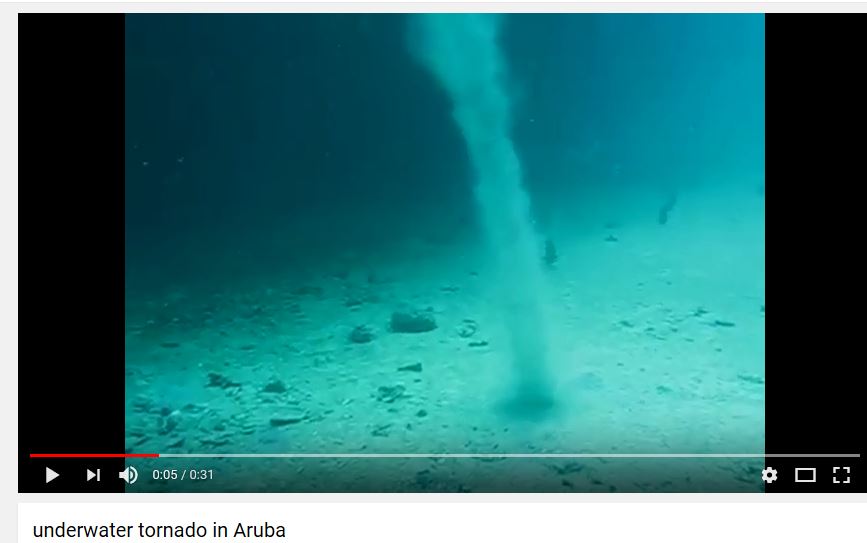 The Atlanteans are masters of current manipulation. By channeling currents, they can produce an underwater vortex like this one caught on video off Aruba. Perhaps by pushing a lever that opens a valve, the current comes in and the vortex starts.

This vortex carries waste material deposited in the vortex chamber up and away from the deep sea abode of the Atlanteans. Like other large water creatures (e.g. manatees, whales) the Atlanteans produce liquid wastes and once these have been wafted upwards to the uninhabited upper realms, dilution and biology take care of the rest.

from comments @StephenG - ""what goes up must come down". The Atlantean system is much like the system terrestrial cities use when they deposit their wastes in a river. The wastes go elsewhere and break down by environmental action during the trip. So too the poopnado: wastes go up and then are carried off by winds and surface currents, breaking down along the way. If they come down, it is not in Atlantis.

Move the stuff out of the city and then let little helpers do all the work.

By little, I mean microscopic.

Bacteria in all of their various forms can break down almost anything. Get the solid waste to the outskirts of town and turn your little helpers loose. Use the results to fertilize the kelp beds or whatever.

You will have to worry about bacteria getting loose, since they will probably get everywhere, but I would hope it would be something that doesn't harm the locals.

They would recycle the liquid waste, since it is closer to drinkable water than saltwater.

Solid waste - that depends on how Atlantis gets its food. If they import it, they can just fluh it outside. The ocean has an almost unlimited capacity to absorb this kind of waste.

If they grow their own food, they would use it for fertilizer.

I would look into "survivalist" grey-water systems. In general you might be interested in researching survivalist culture. The idea being to create homesteads that are entirely self-contained. You'll likely find many of the ideas transferable to an Atlantis-style environment.

Some variation of an Aerobic Treatment Unit

Once the effluent is treated sufficiently, the rest could be take care of (or even used to farm) fish and other critters.

edit: To add to the tech/magic level of your Atlantis, you could also include some kind of biosolid sonication

Could be done by magic dolphins or high tech equipment, but it is a real thing.

12
Planet of the Aves: Aquabirds
13
Possibility of bipedal mostly-aquatic species?
37
What could an aquatic civilization use to write on/with?
5
Could Air-Breathing Mermaids Colonize Atlantis?
6
How to provide health care in a rugged, vast and low populated country?
8
Plausible futuristic infrastructure for an underwater micronation built 300-500 feet below the surface
4
How can primitive human species create an underwater civilization and adapt to their marine environment?
8
How would a civilization of marine life avoid human detection?
1
Could the Deutsche Kaiserreich create a U-Boat with the following capabitities for the WWI if some timetraveler give them the blueprints?