In the future, space travel is common, so common, in fact, that commercial transport is available to most people, like air travel is to us.

As a passenger on a vessel of Galactic Spacelines, half way to your destination, you hear this announcement:

"Attention passengers, this is captain speaking. Due to an emergency, we will be experiencing a loss of pressure in the cabin. Safety equipment is being deployed, please use it in accordance with pre-flight orientation. Ask a steward if you need assistance."

My question is this: What safety equipment is deployed for most of the passengers to survive this event until it ends? (I imagine that at the least this will be airtight oxygen masks for each passenger that completely cover the face, and possibly "space blankets" or clothes to help them retain heat.)

For your choice of equipment, please also answer the following:

I'm going to address this question in two parts; the first relates to cabin pressure in the main on a spaceship (because it's pertinent), then I'll get to safety equipment.

Modern planes are pressurised because of the altitude at which they fly, but what may not be obvious to most people is that they don't pressurise it to 1 ATM (Sea Level Pressure). There's a simple reason for that; the pressure differential would be higher between the inside and the outside, meaning that your plane must be stronger (read as heavier). Also, explosive decompressions (something punching a hole in the side of the plane) would be much more catastrophic if that pressure differential was higher.

If you look at the Apollo missions, you see that they reduced the pressure even further, to the point of having 100% O2 atmosphere inside the modules. Oxygen requirements for humans sit in a band on a spectrum where too little or too much is a bad thing. Pure O2 at 1 ATM will quickly cause oxygen toxicity, and burn out lungs, the throat and even eyes. Too little, and you suffocate. We measure the O2 requirements in terms of partial pressure (PP) because we've found that it's not the ratio of O2 that causes the problem; it's the volume. So, humans can normally operate in around the 0.18 to 0.3 PP of O2 range with no problems.

So; the Apollo modules were pressurised to around 0.3 ATMs and filled with pure O2, and the astronauts were fine.

(I should point out here that no long term tests have been done on this atmospheric model, and long term exposure may be hazardous; we just don't know. But, for the purposes of this answer, we'll assume this is fine for the average spaceship journey)

This of course meant that NASA could build modules with less weight and strength (didn't have to hold 1 ATM of pressure against the vacuum of space) and also, they didn't have to launch all that N2 with the ship as well. This solution meant the astronauts took far less atmosphere with them, as well as lighter ships.

It also means that we seem to be able to withstand around 0.3 ATM alright, provided the atmosphere is pure O2. I don't know what happens if you drop below that, but given NASA didn't (and they researched the daylights out of this) I'd guess it's not healthy even in the short term.

Ideally, the one thing you don't need is the bulky backpack and life support. Let's assume that your cabin has vented and you're in vacuum. All the passengers and crew are in their safety suits, they're not going to be planning any EVAs so they don't need to carry their own air supply, propulsion and monitoring around. You can connect them into a central ship's supply of O2 and power by simply plugging a hose into a wall outlet. The passengers in particular just sit in their allocated spaces, plugged into the walls for power and air, waiting for the problem to be resolved.

Because they're not expected to help, you don't even have to make the 'suits' real suits. Give them the top and bottom halves of heavy bags with a ring connector - that way you don't have to have the suit custom fitted, there's only one connector so not all those seals where they might get one wrong, there's no way they can walk anywhere, no arms to touch anything, and no helmet (better off if they can't see what's happening. Include an internal touch screen entertainment system for them and you've taken them out of the equation insofar as they cant' get in the way of the repair crew, and you can communicate with them about when it's safe to come out.

All in all, this is a reusable, one size fits all, simple way to keep people safe and it's more of a 'pod' than a 'suit'. Given your parameters, it should also be enough to get them through the crisis period.

As already stated in the other answers, you´d need some device to keep some pressured atmosphere. I like the Idea of having some inflatable bag, but I think an even better way would be to make passengers compartments that are easily sealed off.

Here is a little sketch with that principle applied to traditional Airline seating. The seal, in this case, is a roll-down shutter, located where the hand-luggage compartment is normally located. Could also devise something that comes up from the floor. 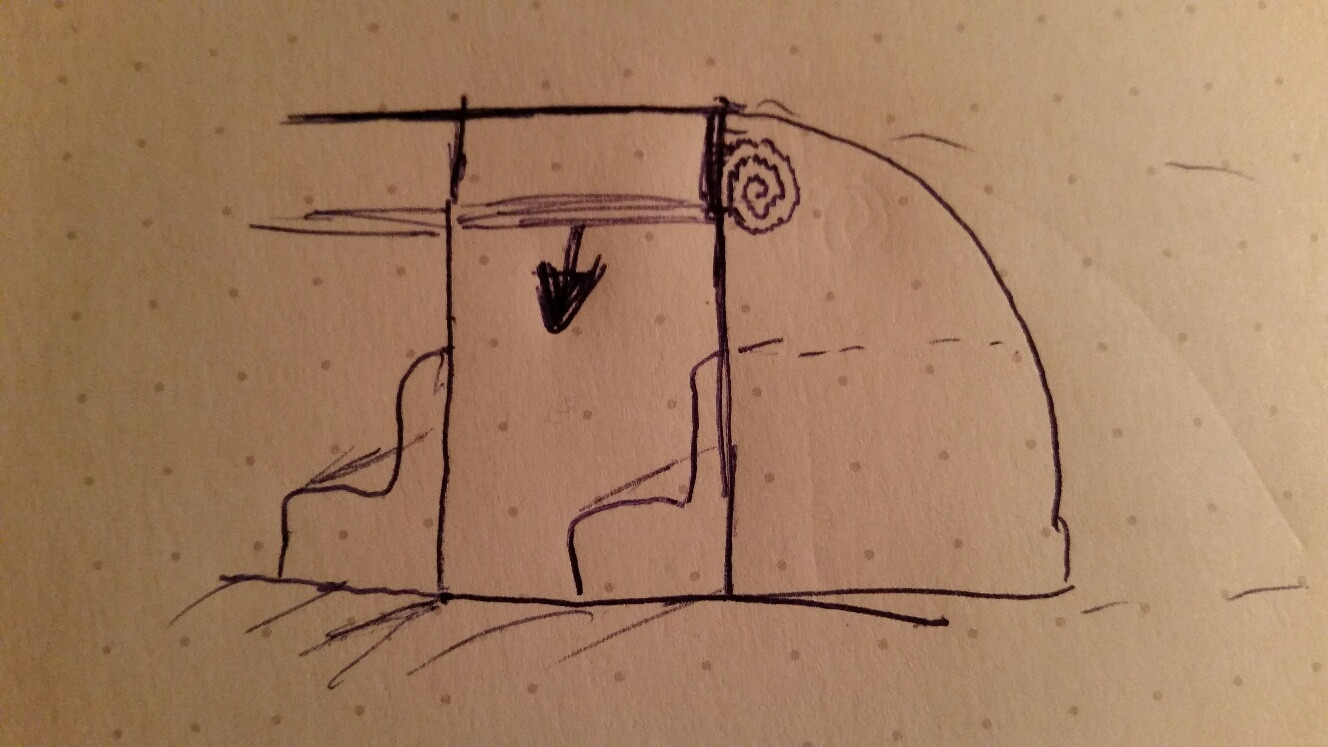 Pass out backpack-sized survival kits that contain some CO$_2$ scrubbing chemicals that will also produce O$_2$. Since we're working at a low-pressure atmosphere here, you don't need to worry about oxygen toxicity and can simply scrub all the carbon dioxide and have them breathe pure oxygen.

They'd be inflated to some degree initially, after which exhalation should balance inhalation and the pressure should remain constant.

The mental image I have is something like a zorb: 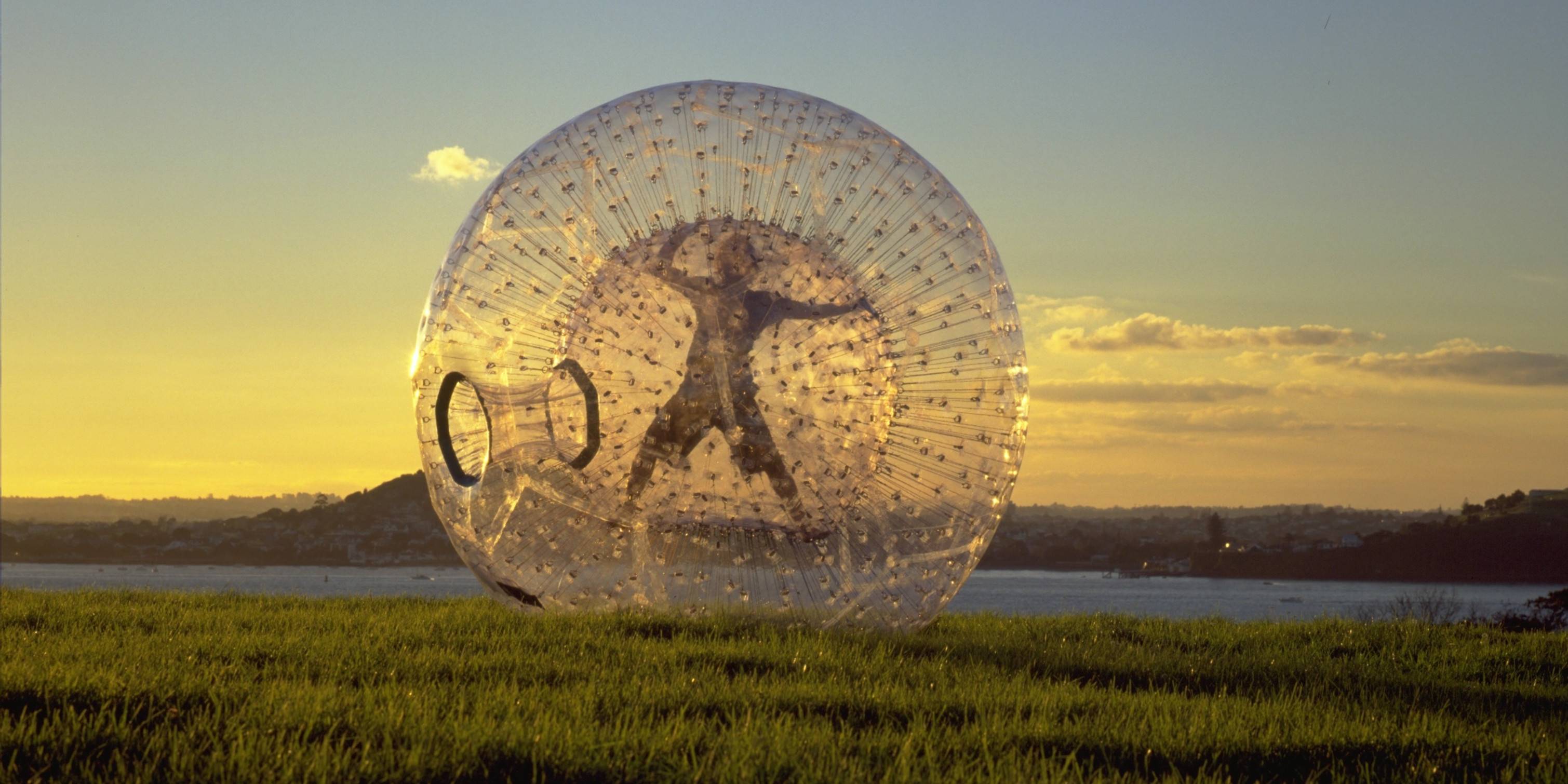 Honestly, if Galactic Spacelines plays this right, the passengers wouldn't even need to know that there's an emergency decompression:

*crschk* Attention passengers, this is your captain speaking. Do you know what time it is? It's mandatory bubble time!!! Please proceed to the nearest muster station to receive your personal hamster ball. We'll get started with a variety of games such as soccer, obstacle courses, and water skiing. Thank you for participating in mandatory bubble time, and thank you for flying Galactic Spacelines!

The issues which come with decompression are two:

For 1 one can follow the path of commercial airlines today: they keep a cabin pressure equivalent to few thousands meter above the sea level (3000 if I remember correctly) and in the event of a sudden loss of pressure the oxygen masks provide oxygen only for the time needed to reach that altitude from the original flight altitude, after which one is supposed to be able to breath decently.

For 2 things become more tricky: boiling saliva in your mouth is all but funny, also your blood expanding in your body will be pretty unpleasant and, last but not least, your lungs are not designed to operate in a vacuum.

The safest direction to me seems to have an air tight "bag" around the seat, keeping a pressure equivalent to 3000 m on Earth, with a dedicated oxygen supply.

Not the answer you're looking for? Browse other questions tagged science-based survival vacuum or ask your own question.

21
How would a Mars colony living in a giant dome protect against rapid decompression?

6
How does space between ends of a wormhole work?
4
How to check for atmosphere behind a door on a damaged spacecraft
27
How should fledgling planet colonies deal with supply crews suffering from barophobia (fear of gravity)?
13
Can the Sun lose enough mass that Saturn's current velocity becomes escape velocity?
10
Effects of Explosive Decompression on the Human Body?
5
Effects of a supermassive ship crash landing on a planet
6
How much damage could a complete loss of technology cause?
4
Space station design for long-term safety and durability