Could a humanoid species exist with vastly different heights?

Many mythological humans vary in depictions. Let's use Trolls from Scandinavia as an example. Some are said to be giants compared to humans (I'd imagine twice the height), and some, like Danish Trolls, are said to be the same height or smaller than humans. 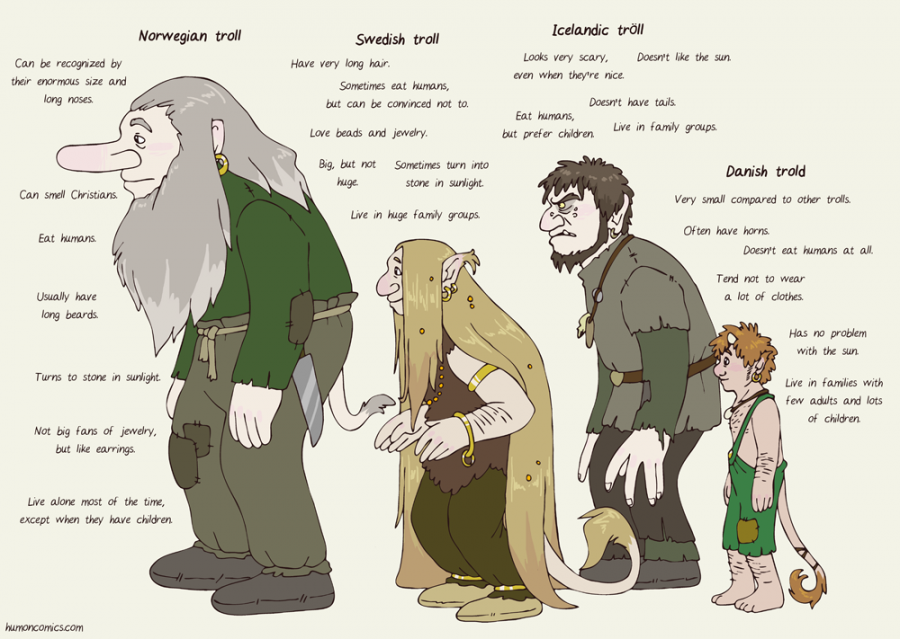 Same for other big species such as Ogres, Cyclops, and Orcs. They can either be twice the height as humans, or the height of a child. Considering the necessities of animals being huge (bigger heart, higher blood pressure,thicker limbs,etc.) How could a species biologically evolve and exist with such varying heights without Darwinism being in the way?

If we look at the range of human sizes recorded today: We have Robert Wadlow ad 2.72 meters and Chandra Bahadur Dangi with 0.55 meters, So Humans are already appearing with a variation of 1:5

If we look a a species apparently more prone to genetic variations: Smallest dog I could find is the chihuahua starting at 0.15 m shoulder height to the Irish wolfhound of 0.9 m we get to a high variation of 1:6

So you´d really need to invent anything, just make the variation genes a little bit more unstable to get a more common spread of the extreme small and big specimens.

No need to go purely mythical for your reseach. Have you looked at any real hominid species for inspiration?

Homo florensis is a, now extinct, hominid species. It is theorised that they had an average height of 1.1 m. It has a nickname of "the hobbit" and was actually almost named Homo Hobbitus.

Some of our older ancestral cousins, Homo australopithicus were only around 1.4 m, but still occassionally used both hands and feet for walking. But that was quite awhile ago.

Homo neanderthal was about the same height as modern humans, if not slightly shorter. Cro-magnan was also about the same height as humans. Both existed at similar times to our older Homo sapien ancestors. If you had provided the same healthy diet that we have now, it can be argued that they could be taller than modern humans. (I think it more logical to have them as the basis for your giants rather than tall and slender elves. I think I'm being a bit speciest).

I found this helpful, not entirely accurate image, on quora of Hominid height development. The second image from the Natural History Museum gives a better sense of when the different species overlapped. You can see immediately that several "species" (see main edit) of hominid existed around and at the same time. 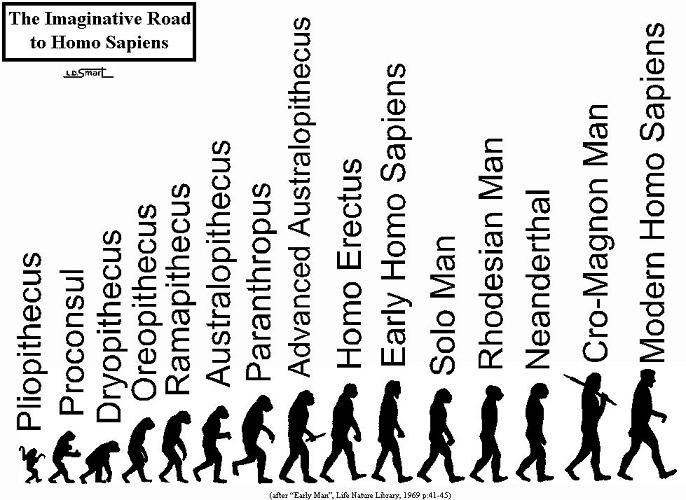 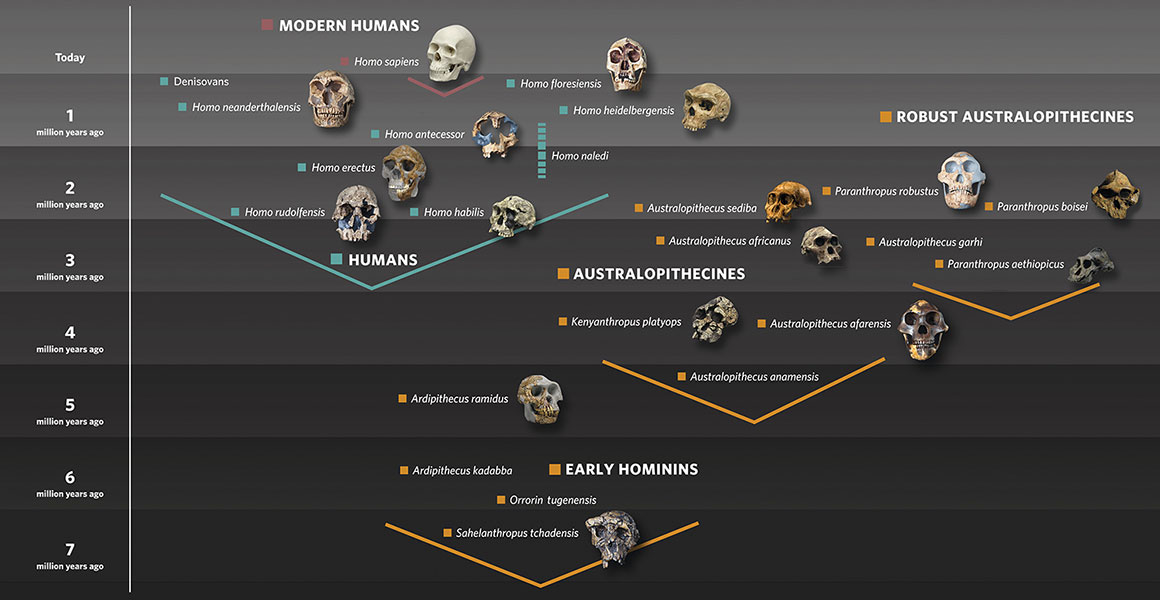 MAIN EDIT: Our research into our hominid past is still incomplete. As such we often are basing entire new species on incomplete skeletons. We could quite possibly be measuring intra-species variation as entirely different species by accident/incomplete data. We can successfully interbreed with several of the other hominid branches, eg cro-magnum and Neanderthal etc. (many Homo sapiens have H.neaderthal DNA in them).

Darwin did not know about genes and genetics.

Non-Darwinism does not deny or dispute common descent or the fact of evolution. It is only concerned with denying or downplaying the "Darwinian" mechanisms of evolution, such as natural selection or sexual selection.

Because of this, you can still use theories of genetic drift and isolation to explain your geographically distinct Giant and Troll characteristics. So tall Giants in one area and short Giants elsewhere. These different Giant tribes could still interbreed and could technically be considered the same species.

If you happen to provide a hearty mead and protein sources for some of your Giants and not for others, get some of your dwarves to live somewhere else besides those dank caves, and give some of your orcs some medical care, this could also explain some of the smaller height discrepancies.

How could a species biologically evolve and exist with such varying heights without Darwinism being in the way?

From this, I am assuming you mean a single species having variations in size, versus a range of related species being different sizes (but the similar sizes within each species).

First, we can answer a broader question: Is it possible for a single species to produce individuals of varying size (on the order of 2x difference in size)?

The answer to that is definitely yes. There are lots of examples: for instance, Canis familiaris domestic dogs. A single species with at least the same variation in size as the trolls you're asking about. In this case, the variation was basically due to human meddling by selecting genetic patterns to emphasize a specific desired trait.

Of course, as you pointed out, the species needs to be able to support the size range (ie heart size, bone strength, etc). It's hard to answer this for a mythical species since we don't have an actual physiology to study. Further, it's hard to address the reasons why a mythical species would develop such different size ranges in sub-populations, but the good news is, you have a template to go on (the trolls you mentioned) and enough leeway to develop your own answers as part of your storyline.

If we do not hold tightly to genetics, (or simply have several gene combinations result in a wide variety of sizes), it is simple to have a species with that trait.

The primary problems with such a variance come from the difficulty of interbreeding between the different sizes.

For example, a Chihuahua and a Great Dane can interbreed, but the mechanics of the act itself may be difficult and awkward, and a female Chihuahua likely couldn't bring a Great Dane mix to term.

Here are 3 ways to address the 2nd point (carrying to term).

Here are 2 ways to address the 1st point (the act). 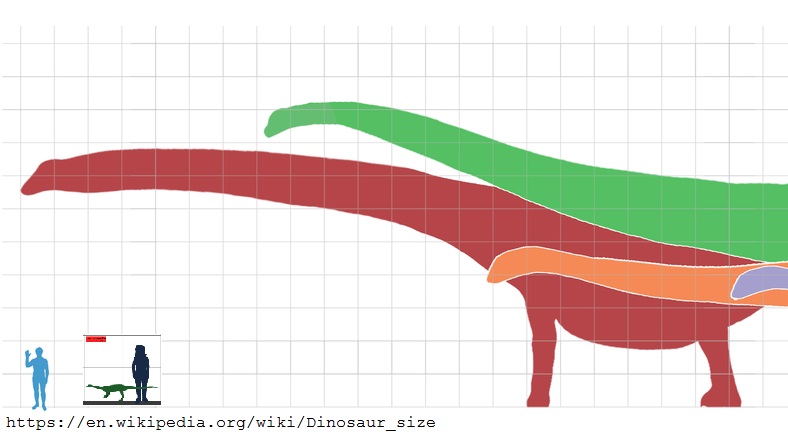 There are plenty of examples of animal lineages in which species show the size range you want and greater. Bears are the closest to actually exhibiting the size range of the trolls you ask about. Elephants show an even wider range and sauropods an immense range.

Possibly the different types of trolls could be members of the same species at different stages of life. Trolls could change their appearance radically between each life stage, the way caterpillars turn into butterflies, as well as suddenly growing much larger each time.

Note that a typical human will grow about four to six times taller during their lifetimes, and some have grown much more than that.

A newly hatched crocodile might be only one foot long and grow to be 15 times as long and about 3,375 times as massive.

Newly hatched sauropod dinosaurs would be curled up in their eggs before hatching, and still could not be more than a few feet long when hatching, judging from the largest known dinosaur eggs. But depending on their species, they might grow to be more than 15 times, longer. A four foot long baby that grew to be 80 feet long would grow 20 times longer and 8,000 times as massive.

And some Sauropods grew much bigger than that.

If the legendary and controversial Amphicoelias fragilimus and bruhathkayosaurus were as big as the largest estimates, adults could possibly have been forty or fifty times as long as newly hatched juveniles.

So it is easy to believe that the different stages of the troll life cycle could be less different than tadpoles and frogs, and range in height by a factor of only four or five.

Note that many human children can walk and run well by the time they are two feet tall, and the tallest human was almost 9 feet, or 4.5 times that tall. And there was allegedly a prehistoric man over 11 feet tall judging from his leg bone.

The tallest living and prehistoric bears could rear up and walk on their hind legs for a time, at heights of 10 to 15 feet.

The extinct ape Gigantopithecus blacki is sometimes believed to have been bipedal and 10 or 12 feet tall.

A large elephant can rear up on their hind legs and tower about 20 feet tall. And a large circus elephant was taught to walk on his hind legs for hundreds of feet.

Prehistoric giant ground sloths could stand up to a height of about 20 feet, partially supported by their powerful tails.

Thus if the trolls change their shape a bit every time they morph into a larger stage of life, they can have a size range much larger than you probably need.

Expanded; in group A women only allow the tallest men in their generation as mates. In group B the women only allow the shortest to mate. (Or the men selecting, there are cultures that do each, doesn't mater). Much time passes. The populations start adjusting to this preference and over time the heights change.The reasoning for the preferences are up to the author and can be either part of the plot or just along the lines of 'eh, they like 'em short in group B's culture.

Sexual selection is a very strong component of Darwin's theory of evolution and it is completely realistic to have this be the engine by which your species evolved these differences.

Not the answer you're looking for? Browse other questions tagged biology creature-design evolution fantasy-races mythology .

15
What evolutionary factors can contribute to large sexual dimorphism in large mammals?

4
Skin tones for humanoid species living on planets orbiting different types of stars?
10
Species with many different looks which can interbreed
23
Physical correctness of trolls with high regeneration ability
4
Could a tree evolve to have vastly varying shades?
11
Speculative Biology of a Haplodiploid Humanoid Species
3
Humanoid species with Fully rotatable and foldable joints
18
Can a species have different ancestors?
5
Humanoid Species