How long a footbridge could you make from natural materials? 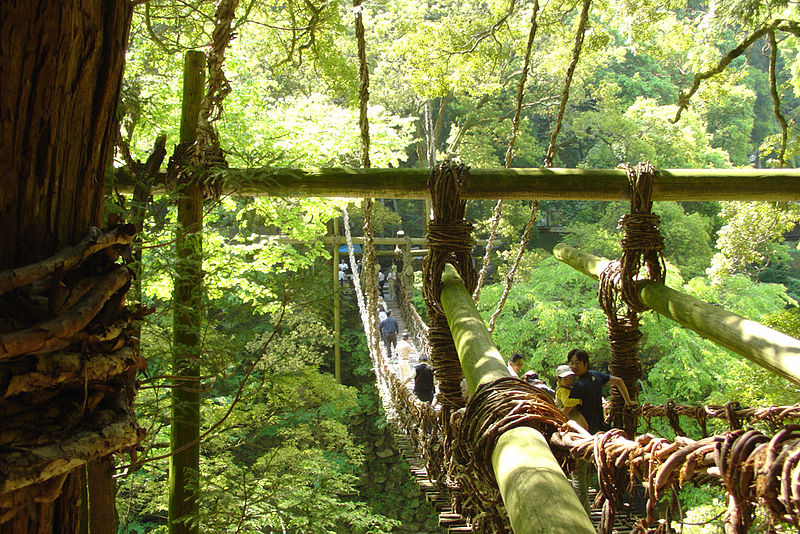 If I was designing a world for a culture living in a rain-forest and their land was cut through by many vast ravines then what sort of spans could they bridge just using the materials naturally available to them?

I expect that the limiting factor would be the maximum feasible tensile strength for rope made purely out of natural materials, in which case what could be done to increase that?

Longer than you might think. Mid 19th century suspension bridges were made of stone and iron, and they spanned 300 meters. Could we make one without metal?

The Inca made suspension bridges from ropes woven out of grass. MIT students recreated a 60 foot long one and it's known the Inca spanned ravines of at least 150 feet. Can we do better with modern engineering? Probably by using the physics of a modern suspension bridge.

What do we consider "natural"? Wood, fiber and stone, obviously. I'm going to assume no metal. Is concrete natural? Its been used since ancient times, especially by the Romans. How about brick?

Each fills a key part of bridge building. Fiber for flexible tensile strength (ie. pulling), stone for compressive strength (ie. stacking), and wood for a bit of both.

The first problem is building the towers. If you have a long rope, the straighter you try to pull it the more tension you put on it. This is why suspension bridges have high towers to provide a long, shallow arc to reduce tension on the cables. Our tower would likely be made of stone, anchored by cables at the top on both sides just like a normal one. By anchoring it on both sides, this balances the pull of the cables and translates it into a force downward (compression). By anchoring the cables up high, the angle will be increased translating some of the force down (compression) rather than at right angles.

Since 19th century suspension bridges used stone for the towers, we can be assured it is adequate.

After that, the question is the tensile strength and density of natural fibers. As the bridge gets longer, the rope must support itself in addition to the structure. As you make the rope thicker, there is more rope to support. Steel is much stronger than natural fibers by volume, but only slightly more so by weight. For our natural cable, I'll use manila rope for comparison. There's plenty of information on it, it's very strong, it resists rotting, and very thick ropes were widely used historically. (Silk would do even better, but I'm writing that off as being too exotic to gather enough to make a bridge cable). By volume, a steel rope will hold ten times what a manila rope will. But by weight, which is what we care about, steel is only about 1.5x stronger. Source for steel rope and source for manila rope. Our natural fibers will have to be much thicker than steel, but can be nearly as strong. This is good news for our bridge.

Let's look at the Brooklyn Bridge. Built in 1883, its central span is 486m with towers made from limestone, granite and cement, all available to us. The cables are over 15" thick supporting 12,000 tons with a maximum strength of 100,000 tons. A manila rope would have to be over 150" thick to support the same weight, probably unrealistic even by Victorian naval standards.

What about the more modest, and earlier, Wheeling Suspension Bridge? It spanned 308m and was built before cars allowing it to be much lighter. It used 7.5" thick iron cables rather than steel. Iron has half the strength of steel which is good news for us. The equivalent natural fiber cable would likely be 35" thick. A tremendous rope, but well within the range of what was built for 19th century ships.

(I played very fast and loose with my calculations, someone with more knowledge of material engineering should check them)

Your expectation agrees with everything I know about structural materials.

The most important property of a rope, besides its base material, is its braiding and twisting. The thicker the rope, the more tension it can support. We see this technique used in almost every rope ever used; they are composes of smaller fibers which distribute the load to all the other fibers. There is a limit to this, though, because simply adding more fibers increases the weight of your rope, which in turn increases the tension in the rope.

Different methods of braiding your rope also contributes to the overall strength. The braid and the direction of the yarn in each strand is important. Do it wrong, and the rope's tensile strength is not maximized.

You could try to apply an adhesive or sealant to your rope, to distribute the load more evenly across fibers and to protect them from the elements. Such a coating would help increase the longevity of the bridge. After all, when fibers are removed or decompose, that weakens the overall strength of your rope.

If you could find a chemical treatment which improves the overall strength of your rope, then more power to you. (And more tensile strength to your rope!) I'm not aware of any such treatment for natural fibers, but it could exist. Waxing and oiling rope is a common practice, mostly to prevent wear and tear on the rope, and less to increase the overall tensile strength.

The final option is to simply get a stronger fiber for the rope. That is, find an fibrous object that you can twist into rope which is stronger than the one you are currently using. Modern "ropes" on bridges are made of steel for this very reason.

How you make your bridge depends on your structure, and how much weight you can support. You could make a simple bridge with only two ropes, but it gets tricky. You can add another hand hold, or tie the three together so the cross section is a V...

Looking here, you can see that 2" hemp rope can support 120 kN, so it could support about 12000 kg. Here we have a list for the linear density of 2" hemp, which comes out to 160 kg/m. A simple bridge, with just two or three ropes crossing a chasm, will result in a bridge of a maximum length of 76m which can not support any weight on it. If you make it 75 m, you can support 160 kg with 2" hemp.

It should be noted that the previous paragraph assumed no safety factors, so it is very dangerous. This bridge is literally pushing the material to the limits, and cross winds and other factors could easily break it.

While not the longest possible (about 30m), I suggest you take a look at living root bridges. They take decades to construct, but last centuries and don't require pretty much any technology or tools but patience. 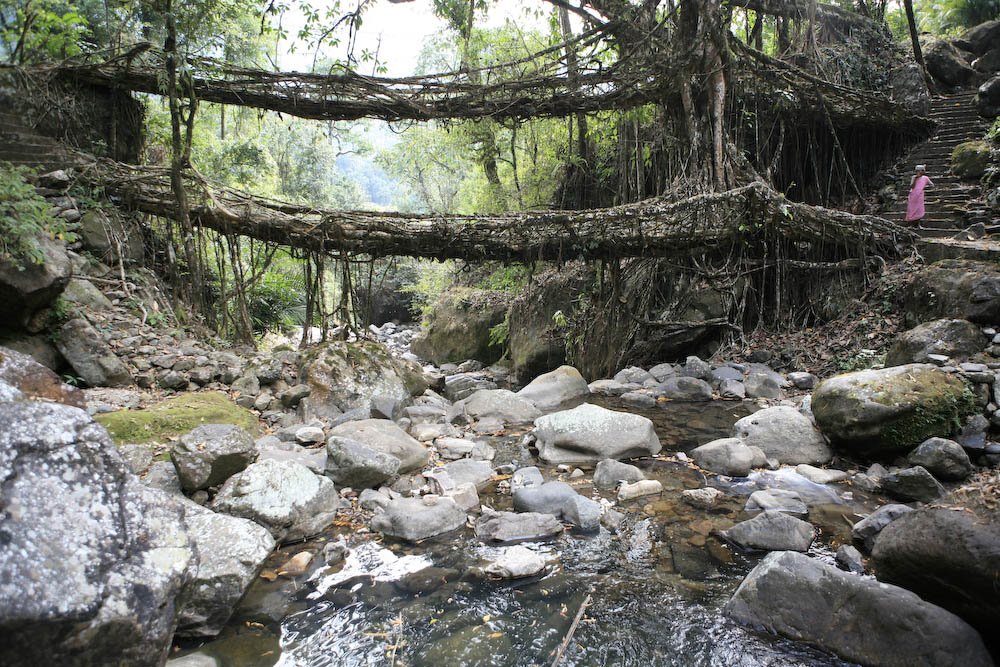 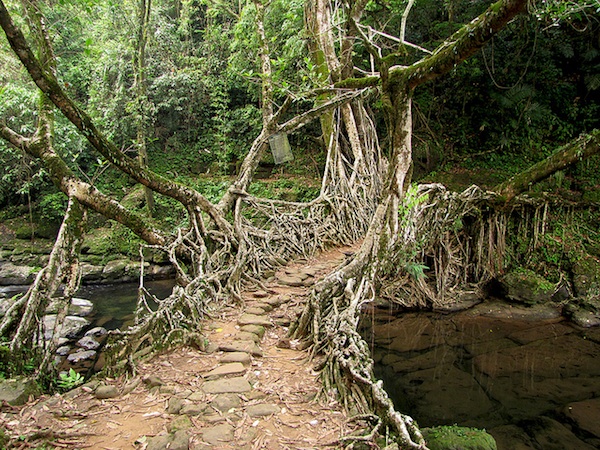 Theoretically, bigger than you will ever need it...

As PipperChip's answer stated, there are various ways to increase the strength of a rope, including braiding, chemical treatment, and just getting stronger materials. We can assume that since your world has many ravines, developing these bridges is a major concern of its inhabitants, so they spend a lot of time making better materials. We can also model your bridge as a rope (or a few ropes) strung across the ravine. Other people have thought about this sort of problem before - the people who have theorized about space elevators! Regardless of the strength of the rope, we can develop a model for the length based on strength, and when I say we, I mean Jerome Pearson in 1975, who wrote this paper about space elevators. The takeaway we can get from his paper is that the strength of a rope (if it tapers in the middle of your bridge and widens at the ends) is only limited by its weight, but eventually it would get so heavy that it would tear apart under its own weight, so any material has a maximum length. The fact that rope has less mass per unit length than, say, steel, helps with this.

There's a problem here, though. We can alter the equations to account for sea-level gravity and all that sort of thing, but we can also make another optimization. Normally, such a bridge would look like this one, with a curve downwards: 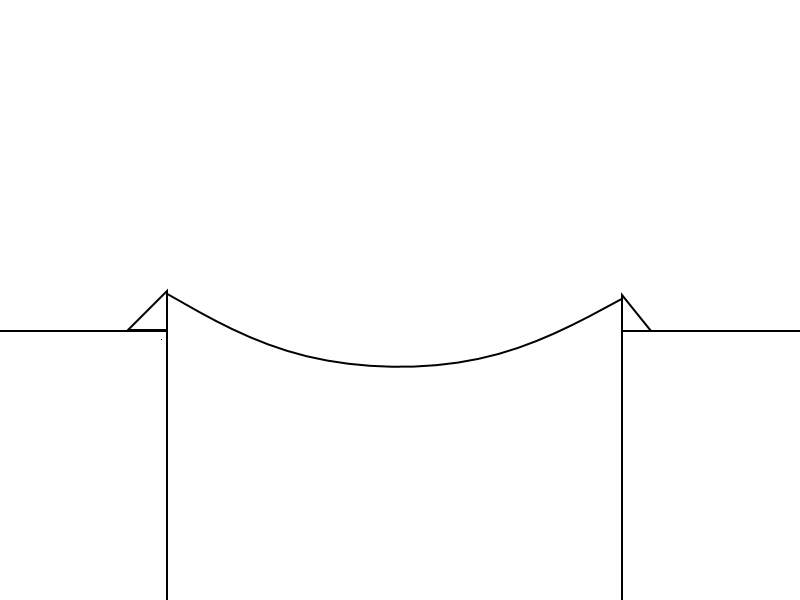 But if we cantilever the towers backwards instead, we can pull the rope taut, like this: 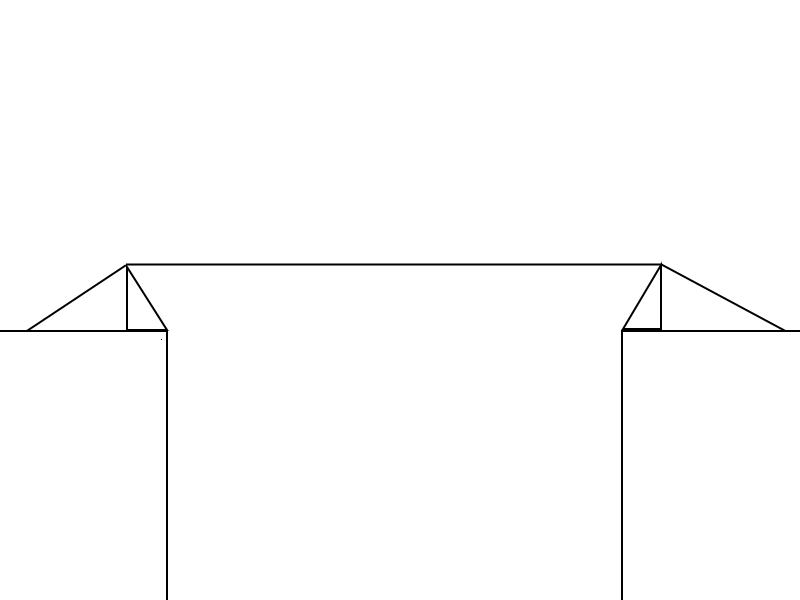 (Sorry about my illustrations)

This cancels out the effect of weight on the rope, but it means much more force would have to be applied - it's actually infinite for a perfectly straight rope, thanks to the relation: $$ F=\frac{mg}{2sin(\theta)}\ $$ If the rope went straight down, the force would just be that of gravity on a hanging mass. So let's just assume that the rope curves deeply enough that we can ignore the angle, thanks to some big towers. The real question now is at which length a given rope has a tensile strength equal to its weight, and which rope has the greatest of these lengths. But tensile strength is also related to the cross-sectional area of the material. So if a material has a low density, an extremely thick rope can be braided from it that can endure extreme lengths.

tl;dr By braiding a light, strong rope, you can span distances in excess of a kilometer, with no more than a manila hemp rope.

Not the answer you're looking for? Browse other questions tagged technology flora construction or ask your own question.

3
How long of a clearspan could a movable bridge have with only late-medieval materials and craftsmanship?
4
Could you grow plants from nothing (or very little) using hydoponics?
6
Deciding between two methods of keeping people from using technology in combat in my urban fantasy setting
4
Could natural selection imitate humans' selective breeding?
30
How could indestructible materials be used in power generation?
25
What sort of materials could be used to make clothing in a swamp?
9
What materials could create a translucent tower?
2
how much paper could you make with the early paper machines?