The Keplerian is considered a child until it reaches 15 years old where it is considered an adolescent. In this species ovulation = having a period so the first ovulation determines when the Keplerian will have her first period and primary amenhorrhea is in most cases an ovulatory problem in this species, not something wrong with the uterus. Only change besides sperm production and more frequent erections in males is muscle mass.

Adolescence lasts until the Keplerian is 25 years old at which point it is in a 1 year gap between adolescence and adulthood. This is when ovulatory problems become concerning. Before, it was normal, now it isn't but at the same time it kind of is (in other words a few anovulatory cycles are normal, a whole year's worth is abnormal).

Obviously, it wouldn't make sense for aging not to occur. What does make sense though is a cycle between normal and reverse aging based on telomere length. Normal aging occurs, most cells don't divide anymore. But stem cells all over the body replace these old cells. They have a short telomere length too. So telomerase is activated in the stem cells. At the same time, it is regulated so that you don't get the opposite of irreversible aging, stem cell cancer.

I imagine something like the lac operon would be in the area of DNA where the telomerase gene is. 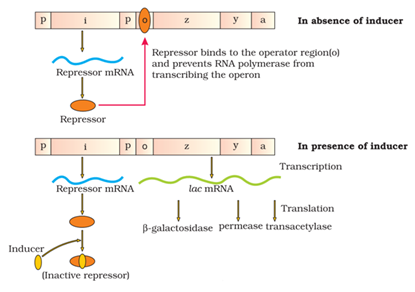 So the senescent cells would be secreting an inducer molecule which would be taken up by stem cells, inactivate the repressor, and allow RNA polymerase to transcribe the telomerase gene. The telomeres are lengthened and the inducer gradually gets broken down so a Keplerian does not get stem cell cancer. As there is less and less inducer, there is less and less telomerase being used because another molecule related to mitosis supresses the telomerase. The telomerase gets degraded while the telomerase suppressor gets preserved to help in mitosis. This gradually leads to reverse aging but this only lasts another 100 years before aging goes back in the other direction. This system repeats every 200 years until the Keplerian dies.

But would my proposal work? Could something like the lac operon work to both prevent irreversible aging and stem cell cancer?

To paraphrase a man much more intelligent than I:

But in this case, not only it is possible, it has precedent in nature.

There are creatures, complex animals even, that do not age (in a way that we can perceive, and for practical purposes). Wikipedia has a list in its article for biological immortality. We learn more about this every year. Some cases are really interesting. For example, the wiki cites greenland sharks as living up to four hundred years - and other sources suggest that some sharks may even have been alive for over seven hundred years. They are older than any country in the New World!

But those are just the creatures that have negligible aging. What is even more interesting is a species called of jellyfish called Turritopsis dohrnii, a.k.a. the immortal jellyfish, or the Benjamin Button jellyfish (after a film whose protagonist ages in reverse).

If a T. dohrnii jellyfish is exposed to environmental stress or physical assault, or is sick or old, it can revert to the polyp stage, forming a new polyp colony. It does this through the cell development process of transdifferentiation, which alters the differentiated state of the cells and transforms them into new types of cells.

Theoretically, this process can go on indefinitely, effectively rendering the jellyfish biologically immortal, although in practice individuals can still die. In nature, most Turritopsis are likely to succumb to predation or disease in the medusa stage, without reverting to the polyp form.

The capability of biological immortality with no maximum lifespan makes T. dohrnii an important target of basic biological, aging and pharmaceutical research.

So maybe keplerians are able to emulate transdifferentiation process of the immortal jellyfish, but not as efficiently because they are more complex beings. Alternatively, they do emulate it perfectly, but the irreversible accumulation of certain substances from their own metabolism causes their cell lines to degrade despite reverse aging. This would make a third or fourth reversal of senescence nonviable for most individuals, and five or more cycles of reverse aging would be unheard of.

24
How could an immortal organism avoid cancer?
4
How could the alien hybrids from the “Species” movies be approximated under real physics?
3
How to get clones to look identical to original?
5
Magical Forest Extends Lifespan and Magic Talent But Fades
27
How could immortal children age faster than immortal adults?
5
Oogenesis similar to spermatogenesis
2
Dwarfs can live for hundreds of years, but how? (Dermatologists hate them!)
3
Ovulation dependent menstrual cycle?
7
What's the disease?